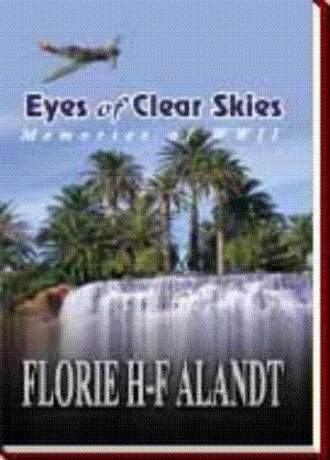 Up the steps in the compartment,
all seven of us, the youngest one on her lap
broken in sleep...It’s moving. Off we go.
Who knows where--? An adventure--?
Nice, Cannes, Toulon, Marseille, Beziers,
they all fly by until the slow down, the stop,
the change of direction.
The lulling ride and stop turns into alarm.
Surrounded by obedient clones,
bayonets pointing,
the train, emptied of its human cargo,
is requisitioned on the spot for the conquerors.
Waiting in the morning chill,
scared children watch for clues.
She has bartered a concession, my Mother,
but not her country’s pride.
She can board to her next stop.
There’ll be surveillance, search,
speech will be monitored.
Officers are assigned to guard the innocent.
Breathe shallow, breathe deep, it’s rolling again.
Relief and fear mingle under the intense watch.
Time passes. The guarding officers initiate a
hesitant conversation, the children all ears.
Pictures of loved ones exit from their wallets,
trips to Paris described.
Then questions reluctantly posed: what would
happen if you resisted?
How they do love France, its culture, its language!
The educated ones are greedier,
the prize more golden.
They know what’s at stake.
Then a fateful question:
"Do you like Germans, Madame?"
"Non" she dares to answer, my Mother.
Is he going to faint? He’s so white!
He rises, goes out the door,
the only witness to her rebellion.
The other officer had gone out before
to smoke. That cigarette may have saved us!
He returns. ...still white--
Can the inevitable happen?
She offers him a rum-drenched sugar cube...
He accepts.... the episode is closed.
End of conversation...

Sarah has disappeared, her parents deported. The Nazis are searching for the missing child. France’s mother is suspected of hiding Sarah.

Thus begins the flight of a mother and her six children to safety.

This is the story of a courageous woman who, alone, secures her children’s survival. The author, a child then, recounts the altered life of her family during these frightful years.

Florie Houques-Fourcade Alandt was born and raised in Nice, France. At age 22, she was awarded the "Medal for Devoted Service."

In 1958, she emigrated to the United States of America. She has lived in the Detroit area for over forty years. She received a Master’s Degree in Social Work from Wayne State University, worked for twenty years in the fields of Domestic Violence counseling and Home Health Care.

She and husband Bill live in Traverse City, Michigan, where their four children and their families have settled. She is currently working on a book on Home Care.