The Mind of God

Human Destiny, Music, and the Search for Meaning Amidst Tragedy 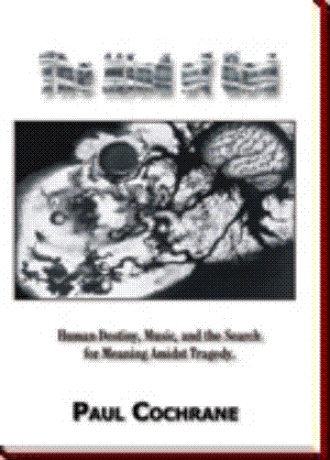 " --if we do discover a complete theory, it should in time be understandable in broad principle by everyone, not just a few scientists. Then we shall all, philosophers, scientists, and just ordinary people, be able to take part in the discussion of the question of why it is that we and the universe exist. If we find the answer to that, it would be the ultimate triumph of human reason-for then we would know the mind of God."

Sometimes, the greatest adventures in life are internal. This work represents such an adventure. It's a journey through the unseen dimensions of mind and spirit. I can attest to the reality of the events described herein. They are not fictional. The journey isn't new. It's been the quest of millions of persons for thousands of years. But, like the uniqueness of one's fingerprints or DNA, each life story is unique.

I began the quest as a youth, by borrowing from the scientific method and generating a few hypotheses. It was soon discovered, however, that the investigation would need to extend beyond that approach. After some time, the "unseen" realm occasionally manifested itself in the physical world, as if a level of reason was operating. In the years following, I began working in emergency services and witnessed many chance events of tragedy, including the deaths of friends and family. What part, if any, did reason have in these things? Could there be meaning in the probabilities of what appeared to be mindless suffering?

In 1994, something happened that would forever change my life. For one week, each thought of every moment became related to those things occurring in physical reality, as if the very thought was creating it! Psychologist Carl Jung defined such experiences as synchronicity, or meaningful coincidences. Many of the events involved music, whose lyrics perfectly reflected what was happening at the moment. The result was both electrifying and unsettling. What level of intelligence could operate in this way, and what was it leading toward?

Gradually, it was revealed that the processes of our planet and the interactions of its inhabitants are orchestrated by a higher level of intelligence leading us, in an evolutionary process, toward our destiny! I've come to believe that most people are completely unaware of this process.

There are, however, two burning questions that remain: who's "pulling the strings?" and what are we evolving toward? That's what this book is about. The following pages will present the ideas as they were presented to me and describe my journey of arriving there. The final conclusions might be shocking!

Having no intentions of writing a book, my life seemed to accumulate a lot of strange and interesting experiences. One night, it came in a dream that the experiences were integrated into a story, and the story needed to be told. Once I made the decision to proceed, the narrative began writing itself, the bulk of the contents being produced from the dream state. It might therefore be appropriate to welcome you to the "waking dream." I hope reading it will be as interesting as it has been living it!

Synchronicity and the Nature of Reality

"You don't see something until you have the right metaphor to perceive it."

The concept of miraculous coincidences is not at all new. The phenomenon has been recognized by many cultures, and in the distant past, was attributed to the acts of the Gods. In Greek mythology, the God Hermes, was represented as a playful "trickster" who was manifested in unexpected and humorous events. The same type of character was known by various names in different cultures. To the Native Americans, he was known as "Ictinike," to the Polynesians as "Maui," "Krishna" to East Indians, and "Loki" to some tribes of Europe. The modern equivalent might be illustrated with a character named "Q" in the popular science fiction book and television series Star Trek. Q was a vastly advanced human with nearly inexhaustible powers, who would appear on the Star Trek space ship, producing mischief and misdeed. Eventually Q's father, a being of superior power and wisdom, would intervene and scold him for his improprieties.

The unexpected nature of synchronicity gives it a humorous twist, as seen in many historic events. Charles Darwin was working on his treatise about "survival of the fittest" in 1844, when he received a manuscript from A.R. Wallace, a biologist unknown to him. Darwin later wrote:

Surprisingly, synchronicity has captured the attention of some well-respected scientists. As one might suspect, the scientists have experienced it themselves! Carl Jung said the synchronistic events he witnessed in his life might appear unbelievable, yet he couldn't deny their reality!

Jung once counseled a woman he described as having a disposition of total rationality. She couldn't free herself from this attitude to explore things from a different perspective. One day, she was in his office describing a dream about an Egyptian scarab beetle. To the Egyptians, the scarab was a symbol of rebirth or new awakening. Jung heard a tapping on the window behind him and turned around to see that just such a beetle was bumping against his window! Catching the beetle, he presented it to his patient. The occurrence of such an irrational event so stunned her way of thinking that it provided the breakthrough for his treatment of her problems!

Another synchronistic experience described by Jung, involved his analysis of the fish symbol. He believed symbols in legend and literature were universal indicators of an underlying psychic structure common to all. He'd been studying the significance of the fish for some time, when the following chain of events occurred on April 1, 1949.

Finishing an inscription containing a figure that was half-man, half-fish, Jung went out to lunch, and was served fish. Someone at the meal, with a slip of the tongue, mentioned the custom of making an "April fish" of someone. Later that afternoon, a former patient he hadn't seen in months showed him some pictures of fish. That evening, someone showed him a piece of embroidery filled with fish. The next morning, a patient he hadn't seen in ten years, described a dream she had the night before about a large fish. A few months later, after writing about this series of events to use in another paper, he walked to the bank of a lake. He'd been to the same spot several times already that morning, and no one else was present. Now, however, there was a sizable fish laying on the sea wall with no explanation for how it got there.

Wolfgang Pauli was a Nobel prize winning physicist contemporary with Jung, who predicted the existence of the neutrino in 1930, 26 years before it was confirmed by experimentation. He also developed the exclusion principle, which states that no two electrons can occupy a planetary orbit within the atom, and he helped in championing the quantum theory of physics. Interestingly, Pauli experienced many synchronistic events in his lifetime.

While studying the behavior of

It is possible to find meaning within the context of human suffering. Having served as an emergency responder for twenty years, I’ve been amazed how many times we have arrived within minutes of an accident, only to find off duty doctors and emergency personnel already there, providing assistance. They just happened by. Discovering this to be a widespread occurrence, I began to wonder if it was just coincidence, or had some deeper significance.

In 1994, an event occurred that would forever change my life. For an entire week, every thought became meaningfully related to those things occurring in physical reality, as if the very thought was creating it! Many of the events involved music, whose lyrics perfectly reflected what was happening at the moment. Psychologist Carl Jung called such events “synchronicity.” In a detective mystery style, the book traces a quest to discover its meaning, winding through ancient myth, science, psychology, and religion.

Gradually it’s revealed that circumstances of chance happen to all of us, but positive compensations are orchestrated by a higher level of intelligence, leading us in an evolutionary process, toward our destiny. What’s the source of this intelligence, and what are we evolving toward? These are the questions addressed in the book.

A truly life-altering experience, your perception of God and man will never be the same!

Amazed at the many times emergency crews arrived within minutes of an accident only to find off duty doctors and emergency personnel already there, Paul began to wonder if it was just coincidence, or had deeper significance.

In 1994, an event happened that would forever change his life. For one week, each thought of every moment became meaningfully related to those things occurring in physical reality, as if the very thought was creating it! After years of searching for it’s meaning, a number of breakthroughs arose from coincidental sources, resulting in the book, The Mind of God. The work encompasses exhaustive research and collected notes and experiences spanning more than twenty-five years.