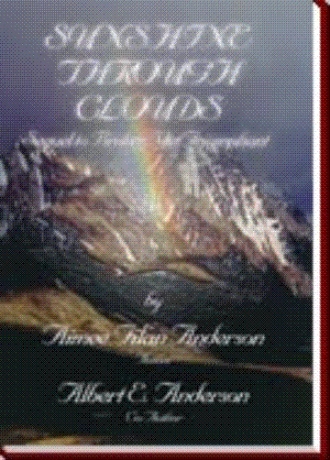 The air was electric as we sat in hushed, deathly silence, waiting for the verdict to be handed down from a pompous judge. Suddenly he started speaking in a slow, easy drawl.

Yesterday we felt he would be fair, honest, and favorable to the plaintiffs and their witnesses; he seemed concerned and understanding as he listened to the causes of action.

With a start, my mind came to attention. I did not like what I was hearing. The judge, who was talking today, did not sound like the man of previous days. My thoughts quickly became a battlefield of emotions. Immediately I wondered who had bought him off; what he was saying sounded so corrupt, I felt nauseated. I leaned over and whispered to my husband, Albert, sitting beside me,

"I cannot stand it. I have to get out of here." I reached for my purse on his lap, where he had been using it for a writing table.

Instantly Albert whispered, "No, you are not. You sit still. That wouldn’t be a good Christian testimony."

I struggled to get my purse, but my attempts were futile against his strong grasp. During that brief struggle, I glanced up to catch the unfriendly, judgmental eyes of the defense attorney watching us with interest. I settled back to listen.

A few moments later, I knew I could not listen any longer; this was the fourth day of a dreadful nightmare. I hastily snatched my jacket, leaving my purse behind, and quickly stood up and stepped around my husband. I marched across the courtroom to the exit, casting a final accusing glance at the betrayer -– the pompous judge –- only to find my efforts wasted; his eyes were averted.

I quickly closed the door behind me. The resounding bang echoed down the corridors of the stately old courthouse. I had not purposely slammed the door, but I made no effort to be quiet. Somehow, in my flight, I felt a little better hearing the echo of that door delivering my strong disapproval to everyone in the courtroom.

As I made my hasty departure, I had no idea where I was going. I only knew I had to get out of there to avoid an explosion of built-up emotions.

I descended the three flights of marble steps that somehow looked menacing to me. A breath of fresh air greeted me as I stepped outside. Pausing a moment before descending another flight of steps to the sidewalk, I glanced across the street and saw a Goodwill store; I made a hasty decision to go there for refuge.

During my descent to the sidewalk, I glanced at the store again, and it suddenly looked threatening. In my good clothes and dress shoes, I started marching across the courtyard and down the sidewalk; I was in a hurry, and I was angry. The following song became my agonized prayer:

I Must Tell Jesus

I must tell Jesus all of my trials;
I cannot bear these burdens alone;
In my distress He kindly will help me;
He ever loves and cares for His own.

I must tell Jesus all of my troubles;
He is a kind, compassionate friend;
If I but ask Him, He will deliver,
Make of my troubles quickly an end.

SUNSHINE THROUGH CLOUDS reveals the continued drama and agitation of broken family relationships. This is a sequel to Aimee’s first book (1983 & 2001) BROKEN, YET TRIUMPHANT, which book reveals the drama of family turmoil, a double-murder mystery, stolen property, near death experiences, and the fish-bowl existence of the Minister’s home through the transparent heart of a Minister’s wife.

The last chapter of Aimee’s former book, BROKEN, YET TRIUMPHANT, contains a courtroom scene. The sequel, SUNSHINE THROUGH CLOUDS, under different circumstances, begins in like manner.

This book reveals the passion for fairness and justice, especially in personal or family relationships. It expresses the longing for just and fair judgment to be rendered, with nothing cleverly and deceitfully covered. Failures here will occur in the finite human realm. However, there is a time and place when absolute justice will be meted out. Justice bestowed then will be due to the qualifications of the Judge.

demonstrates the life-giving path to take when receiving injustice. Unjust treatment wrongly processed within our spirit only compounds the original problem. This book is sent to those in the eye of the storm. Fix your gaze upon the Son and the shadows will disappear. The sun is always shining back of the clouds!

Other titles Albert and Aimee Anderson have co-authored are: WHITED SEPULCHRES and the forthcoming 2001 sequel -- A GENERATION OF VIPERS.

Honesty, integrity and faithfulness form the backbone of Aimee’s life. It is often difficult to live in a world, which compromises those essential virtues. As a child, she was taught to abhor lying; truthfulness became precious to her and remains so today.

Aimee learned that honesty in personal relationships and character transparency can be costly, but people in real trouble require and demand genuine openness. A blazed trail offers assurance and encouragement that someone else has walked the road victoriously.

Aimee's primary desire has been to bless lives and offer help to anyone in need. Her books reveal how Divine strength builds on human weakness to make the impossible possible.

Albert declares, "My wife (Aimee) has been more severe with herself than she deserves. I can attest that she has lived a virtuous life in all areas."

was first published in 1983. Following this she began working on SUNSHINE THROUGH CLOUDS – a 2001 sequel to BROKEN, YET TRIUMPHANT. Aimee has signed a movie contract on both books. Since that time she and her husband, Albert, have co-authored two more books, WHITED SEPULCHRES and forthcoming 2001 sequel, A GENERATION OF VIPERS.

Recently Aimee returned to working on SUNSHINE THROUGH CLOUDS. Her husband, Albert, now has joined her as co-author.