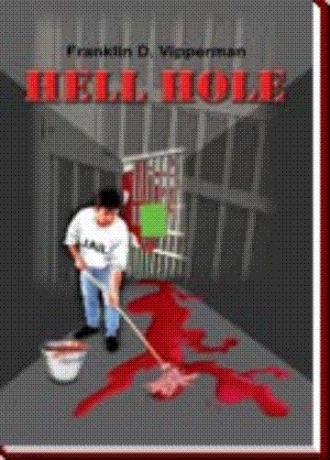 Looking back now, it is difficult to believe that I somehow managed to keep from losing my mind. I suppose the only thing that actually saved it was the promise I made myself -- that I would come out of this nightmare as good a man as I was when I went in...or better. Still, sitting here looking at this stark white page makes me wonder how I managed to get this far without being killed or going mad long, long ago. Oh, it's not all bad. Whoever said “the pen is mightier than the sword,” certainly told a truth that has given me the courage to see me through this never-ending nightmare, and never-forgotten hell on earth....and to warn others about how easy it is to fall into the pit

The Hell Hole is first and foremost a place. The Clark County Jail, located right in the center of downtown Las Vegas, Nevada, is where this Hell Hole existed, and still does. I was thrown into that pit of hell and then deserted by my alleged defense attorney, Harry Eugene Claiborne. Perhaps he was worse than most, but his desertion is actually commonplace behavior for almost every attorney in this country. What happened to me happens in almost every city and town all over this country on a daily basis. Claiborne left me to the police and prosecutors, who were framing me for murder, and there wasn’t a damn thing on this earth that I could do about it. I hope you never have to learn this for yourself....

Incidentally, my name is Franklin Delano Vipperman, and this is a true story: Hopefully you have read, or will read, The Deal Makers and The Cesspool, two other books I wrote. Those books detail the true stories of my experiences with the overwhelmingly corrupt judicial system, police, prosecutors, judges, courts, attorneys, politicians, prisons, and pardon and parole boards....in other words, how it all began....

This is a true story that may very well happen to you, your husband or wife, children, brothers and sisters, and parents.  It could happen today, tomorrow, next week, or maybe next year.  For these truthful horrors touch one in every five families each year.  The likelihood of it touching and destroying you and yours becomes greater with each passing day.  Do not be foolish enough to wrongfully think it can't or won't  happen to you.  These horrors that surround you are kept secreted from you by the overwhelmingly corrupt courts, judges, attorneys, politicians, and the entire despicable news media that covers it all up and brainwashes you each and every day of your life.  If the news media were not the true cowards that they are, this horrendous truth would not be continuing on a daily basis all over this country as it has been since the Salem Witch trials, where they murdered twenty-one innocent people, and are continually murdering innocent people all over the world, with impunity--.

The Author survived the hidden horrors that are kept secreted behind those allegedly hallowed halls of justice, where defenseless men are beaten far beyond repair by police, guards, and each other.  They are left to suffer severe pain, and often death, on cold, filthy cement floors, with only God or the devil to aid them.  Their very next breaths often are their last.  It is a place where hell and anguish surround you every minute of every day, and screams of horror and pain fill your trembling mind all through the dark and seemingly never ending, treacherous nights.  It is a place where men and women alike become animals as pigs in their own sties.  This writer wrote it all down as it happened in his three books, The Deal Makers, The Cesspool, and now, Hell Hole.