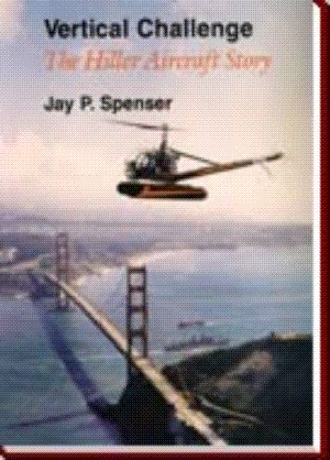 It was like Wilbur and Orville all over again," Frank Coffyn often said of the early Hiller Aircraft Company. He would know; thirty-six years before joining Hiller in 1946, Coffyn learned to fly under the Wright brothers and went on to demonstrate their flying machines to an amazed public.

In the Hiller Aircraft Company, Frank Coffyn witnessed a similar development process. Stanley Hiller, Jr. – who built and flew his own helicopter by 1944 – and his small team set their sights on the commercial helicopter business with scarcely more real support than the Wrights had enjoyed in their quest. Woefully little information on helicopters existed in print, particularly "hard" engineering data. Worse still, Sikorsky and the few other centers of helicopter development were all back East, too far from the California-based company to be of much help. Finally, the two camps one might have expected to champion this new form of flight – autogyro manufacturers like Pitcairn and Kellett, and major fixed-wing aircraft companies like Douglas of Lockheed – provided minimal leadership; the helicopter, it appeared at the close of World War II, was still the largely unwanted stepchild of aviation.

Not to Stanley Hiller, Hoping to exploit a widely heralded postwar market for a personal helicopters – a market that never materialized – he began work in 1942 against seemingly overwhelming odds and attained volume production of a successful commercial helicopter before the decade was out. The Hiller 360 – history’s first stable production helicopter – differs from those of other successful manufacturers in that it arose entirely as a private venture, belying the oft-repeated view that all development in this field was the result of military spending.

The Bell Model 47 – the industry’s first production civil helicopter – enjoyed government support, albeit indirectly. Developed by mathematician Arthur Young and his small team in the early and mid-1940s, this excellent helicopter was financed with profits from World War II sales of P-39s and other Bell military aircraft. The company’s postwar contracts in support of U.S. Air Force/National Advisory Committee for Aeronautics (NACA) high-speed flight research added a boost of a promotional nature: when Captain Charles E. Yeager shattered the sound barrier in his Bell X-1 rocket plane on 14 October 1947, the Bell 47 inevitably rode the X-1’s coattails.

Despite an estimated 300 helicopter projects in the United States during and just after World War II (the vast majority never giving rise to flying prototypes), only four companies – Sikorsky, Bell, Piasecki, and Hiller – actually achieved volume production before the end of the 1940s. Hiller Aircraft, which built the first successful helicopter west of the Mississippi River, was the third company to receive an approved type certificate for helicopter production in the United States.

But manufacturing helicopters in only one part of Hiller Aircraft’s astonishing twenty-five-year history of creativity. Flying platforms, flying jeeps, and flying submarines; ramjet helicopters and mammoth aerial cranes with jet engines at their rotor tips; tilt-wing transport planes capable of taking off and landing vertically; wingless battlefield-resupply aircraft designed to hug the ground at Mach 1 and land in their own length – the list of flying machines proposed or actually built by Hiller Aircraft often reads more like science fiction than fact.

Amazingly, the craft mentioned above could all have flown, and many did, with technology available in the 1950s and early 1960s. First in the vertical flight industry with a separate engineering think tank akin to Lockheed’s famous Skunk Works, Hiller Aircraft made research and development, along with helicopter production, its life’s blood to compensate for its newness, small size, and lack of war-won capital.

Of the military services, the U.S. Army was the logical customer for Hiller Aircraft. Hiller’s creativity found little support within that service, however, because those with an understanding of aviation and aerial requirements had left when the Army Air Forces became the separate U.S. Air Force in 1947. Much of what might have been, therefore, never progressed beyond the proposal or prototype stage.

Hiller produced military and commercial helicopters for fifteen years in healthy competition with Bell Helicopters. Then in the mid-1960s, a new competitor disrupted the light helicopter industry by subverting the legitimate procurement process thereby stealing, in effect, the contract for the Army’s milestone light observation helicopter (LOH). With this theft, Hughes Tool company’s Aircraft Division drove Hiller’s Palo Alto company out of business. In an ironic twist of fate, Stanley Hiller would himself in later years engineer a successful takeover to save a then-ailing Hughes Tool Company.

Hiller Aircraft has left a legacy disproportionate to its small size. In addition to a line of excellent production helicopters, its talented team of engineers generated imaginative flight concepts. Huge flying cranes with jet engines at the tips of their rotor blades, ducted-fan flying machines, vertical-takeoff-and-landing (VTOL) intercity airliners, and other as-yet-unrealized aviation possibilities bear this company’s distinctive stamp to varying degrees. These efforts to change the face of aviation across a quarter-century make Hiller Aircraft a fascinating case study within the vertical flight industry.

focused on a helicopter industry pioneer, the most innovative of the four companies that achieved volume helicopter production during the 1940’s, it was the only one located outside the eastern U.S., in northern California. Not only did Hiller Aircraft build the longest-produced piston-engine helicopter; it was also the source of many innovative alternatives to conventional helicopters -- flying platforms, ramjet helicopters, and cargo-carrying VTOL (vertical-takeoff-and-landing) planes.

Jay P. Spenser provides a highly readable combination of corporate history, technical history, and biography, tracing Hiller Aircraft through war and peace, depression and economic expansion, and final corporate closure. The company’s founder and director, Stanley Hiller, Jr., was only nineteen years old when he made history with his XH-44, the first successful helicopter to use all-metal rigid rotor blades. Hiller’s design skills and his stamina as a test pilot were considerable, and his corporate vision was pivotal in shaping the character and direction of his company. He attracted a remarkable team of engineers, test pilots, and business associates, creating a company noted for the boldness of its design concepts. Hiller Aircraft’s legacy of new technologies remains out of all proportion to the company’s relatively small size.

The highly competitive nature of helicopter development is vividly portrayed. Hiller’s brief World War II association with Henry J. Kaiser is detailed, as is the company’s stand-alone course after 1945, during a time when the future of helicopter technology, in contrast to that of fixed-wing aircraft, was still uncertain. The civilian helicopter market had scarcely emerged and military procurement programs were never guaranteed, thereby forcing all competitors in the U.S. market to ride a financial roller coaster. Hiller Aircraft’s loss of the military contract for the LOH (Light Observation Helicopter) was a crucial factor in the corporation’s untimely demise in 1968, with Howard Hughes playing a singularly dramatic adversary role.

Spenser accurately describes Hiller Aircraft’s intriguing ducted fan research, and its development of helicopters like the UH-1 Commuter (addressing the dream of "an aircraft in every garage"), the classic Hiller 360 (known in its military role as the H-23A, an air ambulance in the Korean War), and the Rotorcycle. He also notes some of Hiller’s more visionary concepts, such as the "flying submarine" and tip-powered flying cranes that were never built although the company devoted years of research to their development. All are presented in a context that integrates elements of economic, social, and military history, providing a working sense of how a test program evolves.

Jay P. Spenser is an aerospace industry writer and former aviation curator of the Museum of Flight in Seattle and the National Air and Space Museum, Smithsonian Institution, in Washington, D.C. He is the author of eight books of fact and fiction, as well as many feature articles. He lives in Seattle with his wife and two children.