Letters and Thoughts on Homosexuality 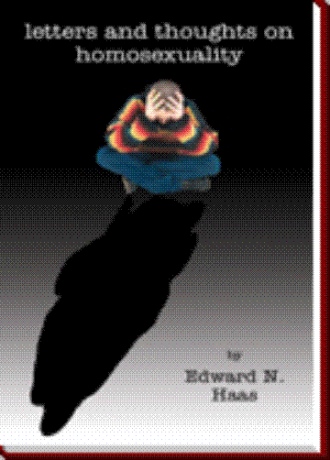 Enclosed is a photostat of a newspaper article which appeared in The Times Picayune, in New Orleans, Louisiana, on Saturday Aug. 1, 1992. As you can see, it was written by a Mr. Paul Recer of the Associated Press.

If Mr. Recer’s article is to be trusted, the brunt of your research revolves around the anatomical differences in the brains of homosexual and heterosexual males. That immediately implies there are only two kinds of sexual orientation. I dare say you are well aware of the fact that there are at least three. I refer, of course, to the fact that some individuals are bisexual.

I would go even beyond that. I suggest to you that each of the above three types can be further divided into two distinct sub-types of orientation. As simple multiplication indicates, that’s a total of six. What is the nature of the twofold division found in each of the other three? My answer shall take a somewhat round about route in order to "kill two birds with one stone."

Allow me to recount to you a 52 year old memory--one which goes back to when I was 4 years old. Despite its age, the memory is quite clear because of the intensity of the pain which it involved.

My parents had taken myself and my older brother with them on a vacation trip to Arkansas in the summer of 1940. Though I do not remember the name of the place, we stopped for a few days at a resort on a lovely river. I can still picture the hill behind us upon which the cabins were perched. With one’s back to the hill and the river in front of you, there was a large, two-story building to the left and a much smaller, single-story one to the right about an eighth of a mile from the other. The main structure jutted out over the river and housed a restaurant upstairs together with a very high water slide.

The slide was nothing like what you see today. It was somewhat similar to a railroad track. The carts which slid down it traveled on two rails, and the bathers rode on the cart which would fly into the air at the end of the slide and propel the riders into the water. My father and brother spent much time on it together.

Being a somewhat timid type, I found the ride much too threatening. My parents, therefore, left me at a wading pool located at the smaller structure. The latter was basically a kind of houseboat tethered to the shore. The wading pool was merely a section of the river near the shore which had been concreted and fenced with wooden railings. I relay all these details so as to re-enforce the picture of just how vivid the memory remains.

The wading pool, as you would expect, was attended by a lifeguard. This particular day, there were two of them. In my mind’s eye I can still see them in their tight fitting trunks--the kind which fit like jockey instead of boxer shorts. Both were in their late teens with well muscled, mostly hairless bodies. As I watched them popping their towels at one another, the longing which swept over me was so painful, I felt like crying. Perhaps it would be more accurate to say I did cry...cry very much, but only on the inside.

Naturally, at 4 years of age, I had no idea whatsoever of what an erection or an orgasm might be. For all of that, I knew part of what made them so exquisitely beautiful was the little bulge in the bottom part of the tight fitting trunks, and I can distinctly remember feeling quite glad they had on that kind of revealing swimsuit rather than the boxer type.

Anyhow, I was most keenly aware of this terribly painful longing to be picked up by the two of them, to be held tightly, kissed, caressed, and told how much I was loved. Of primary importance was the idea my exposed flesh would be pressed tightly to their naked, well muscled flesh. Yes, indeed, dear doctor! Even to that 4 year old child’s feelings, they were the most beautiful vision my eyes had ever beheld or ever could behold. They were God Himself, and the desire to be most physically united to them was so intense, the inability to fulfill it has been, ever since, the one pain rendering life a living hell.

What could a 4 year old have done to bring on such a longing? What kind of deliberation could have been involved? What did will--free or otherwise!--have to do with it? Nothing, I dare say. The desire could not possibly have been anything but some kind of biochemical product sprung from environmental and/or hereditary factors totally beyond my control.

The first point here, then, is this: My own experience concurs with what the article says about hormonal effects upon sexual behavior and brain structure: " . . . . we would expect the differences to occur very early in humans also." There is, though, what I consider a far more important second point here. That point is this: Not all sexual orientation involves extreme pain. Let’s spell that out in some detail.

I begin with myself as an example. Technically speaking, I am bisexually oriented. If a well formed, young female crosses my field of vision, I am automatically affected quite strongly: I can do nothing to forestall it. There is, however, not one iota of what could be even remotely called pain or discomfort. Quite to the contrary, the sight of the female is as pleasant as the sight of ice cream. The desire to be coupled with her is as pleasant as the desire to savor the ice cream. As a result, it takes little or no effort to exercise total control over the heterosexual impulse. As of today, I have not indulged it for about 35 years. However pleasant the whole idea strikes my feelings, it also strikes my thinking the same way ice cream does when I’ve had enough to eat: The idea of eating more is in no way repugnant; but, the idea of getting fat is. A preview of unpleasant, future consequences makes it quite easy for thought to overrule feeling and to turn aside to other things.

How different is the situation when a well formed, young male crosses my field of vision! No matter how fitfully I struggle to prevent it, a most excruciating surge of anguish rips through my abdomen.

To get some idea of what the pain is like, imagine a man with young children overpowered by terrorists. Tied to a chair, he is forced to watch as his children are tortured to death in front of him. Can you imagine the kind of "psychological" pain he would experience as their screams of "Help me, daddy!" bombard his ears and compel his whole body to struggle in vain to get free and do something?

Do you answer affirmatively? If you do, then it is quite right to say this: This is a book written by one of the world’s leading authorities on homosexuality. After all, its author is precisely the kind of individual described in the above paragraph.

Of course, it should be acknowledged that this is not a book in the strictest sense. That’s because the greater part, by far, of what follows is a series of letters written between the years of 1992 and this current year of 2000. The reader will have to judge for himself or herself whether that fact is a beneficial or detrimental one. Hopefully, it will be found to be wholly and entirely a beneficial one.