My Perfect Son Has Cerebral Palsy 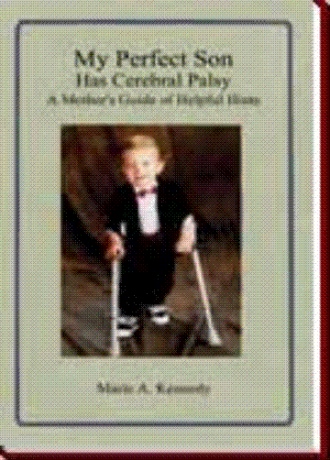 From the first day we brought Jimmy home, I kept a baby book/journal on what he ate, drank, his BM’s, who came to visit, and what we did everyday. I also kept track of his movements, his illnesses, and the results of his regular check-ups. I wrote down the questions I asked and the answers I received. We also had a nurse come by our house while Jimmy was on the monitor about once a month, for six months. Everyone thought or said that Jimmy was progressing and that any delays were because he had been born prematurely.

Jimmy started saying Mom and Dad from about six months old and was always happy and good-natured. However, by Jimmy’s first birthday party, he still wasn’t sitting up. I could prop him up with a pillow or put him in a highchair, but he seemed to be very uncomfortable. He would lay on the floor and roll in the direction he wanted to go. At about fourteen months old, he began to army crawl on elbows and toes very low to the ground.

I remember being at my parent’s house and my dad having tears in his eyes as he watched Jimmy get around. The next day, I asked my mom about it and she suggested that I take Jimmy to a different doctor. I agreed and felt confident that he would say that everything was fine, that Jimmy was very bright and was simply learning movement a little slower. The doctor that my mom and I took him to had been my doctor when I was younger and was still my parent’s doctor, so I could trust what he said.

After looking at Jimmy’s feet and legs and using a tone fork to check his hearing, he said that Jimmy had spastic tendons and suggested that we see a neurologist. I burst into tears and said, "I thought for sure you would say everything is perfect." He gave us the name of a doctor he said he would go to if it were his son, and that we would probably have to do stretching exercises. I went out to the car, hugged my mom and cried; so did she, although neither of us knew anything about what he had just said nor thought it odd that he’d referred us to a neurologist.

I went home and told my husband. He seemed to handle the news very well and said, "Let’s wait and see what the specialist has to say and whatever it is, it will be okay." Our appointment with the pediatric neurologist was about six weeks later; we couldn’t get in any sooner.

My mom and Chooch met Jimmy and I at the office. We were all a little nervous, but had no idea that the doctor would tell us what he did. He looked at Jimmy’s feet and legs and tested his reflex ability. He tapped Jimmy’s head and listened. He then kissed Jimmy, looked up, and said, "I am 99.9% sure that Jimmy has Cerebral Palsy." In a matter of about five minutes, our lives were changed forever.

We all stared at the doctor for a moment and then he asked me what I was thinking. Did I know what it was? My answer was no, but that when I heard those words I pictured crippled, retarded, and wheelchair bound. He explained that cerebral palsy would not get worse and that there are mild and severe cases. He said that Jimmy was toward the mild side. He also told us that we needed to get an MRI in order for him to be 100% sure.

He gave Jimmy to Chooch and told us that Jimmy would probably walk, maybe not normally, but he felt he would walk. Chooch asked if Jimmy would be able to play golf and he said probably, but that it was hard to tell so soon. He suggested we wait for the results of the MRI and then talk to a physiatrist (a doctor specializing in the evaluation and treatment of physical impairments). He gave us a number to call at a local hospital that had a cerebral palsy clinic. He looked at me and said that it

was all right to cry, which I did after I could breathe again. He left us alone in the office for a moment.

December 15th is a day I will always remember. We had all driven separately and met at the office, so we hugged and cried in the parking lot before driving home. I do not remember driving to or walking in the door of our home with our sweet baby, Jimmy.

Jimmy had fallen asleep for a nap and Chooch and I stood in the kitchen not talking or moving. Moments passed before I finally said, "He’s the same baby we walked in the office with as when we walked out." Chooch was holding onto the .1% chance that the doctor was wrong. He said he would carry Jimmy the rest of his life if he had to. Whatever it was, we would do everything we could to help.

We began to wonder if this cerebral palsy was due to something we had done in the past to ourselves or to someone else. Then, the phone rang, it was the neurologist calling to see if we had any questions. This was my opportunity to ask the question on our minds, "Was it our fault?" No, he told us. Cerebral palsy is caused during pregnancy or birth and is not hereditary. Many times, the reason for it is never known. I thanked him for calling and then the waiting began. We couldn’t get in to see the specialist for another two months. We wondered what we were supposed to do now. We had a lot of questions without answers and I wasn’t sure where to look for them.

This book shares the thoughts, concerns, and unrelenting faith of a young mother whose son, Jimmy, was born with Cerebral Palsy.

Jimmy -- a bright, exuberant, and loving child whose smile, makes you want to smile, just happens to have Cerebral Palsy.

Jimmy's mother, Marie, believes in a common sense, hands-on approach. She promotes bonding with doctors and therapists and utilizing innovative therapy techniques to enhance Jimmy's physical and emotional well being. She lovingly details what it is like, on a daily basis, to be a caregiver for a child with Cerebral Palsy. In sharing her creative ideas, utilizing inexpensive techniques, to enhance Jimmy's physical comfort and emotional well being with the cumbersome braces, she motivates and inspires.

By encouraging other parents, with special needs children, to ask questions and become fully informed, she removes the reticence they may feel to confront the matter directly. Further, she inspires the parent to avoid being shy about getting fully engaged in their child's treatment, and to listen to their fundamental instincts as to what is best for their child. This approach creates a feeling of positive activism for both parent and child alike, as opposed to tentativeness or indecision -- which can emotionally stifle both parent and child in resolution of the child's special needs.

This book is a tender look at not only a mother's frustrations and fears, but also of her dedication and triumphs, in a collective determination of spirit, with her very special child. We are empathetic and engaged with her as she overcomes all obstacles to become fully knowledgeable about Cerebral Palsy, and then become fully engaged with her child, as she comforts and encourages him every step of the way. The depth of her compassion, and Jimmy's positive reactions, encourage and stimulate the reader to embrace this overall integrated approach.

She shares her thoughts about the special bonds of family members -- the sheer joy of Jimmy's accomplishments, one step at a time -- and the heartbreak of having to handle the comments and stares of those outside the family circle. The interrelationship of all these factors serves to emphasize the importance of each; and the mother's ability to set the tone for parents, the extended family and friends, and the child. In so doing, the tone is also set for the child's outlook for the future, and his or her relationship in the world at large.

Marie Kennedy's writing style will both enthrall and stimulate you, by giving you a unique insight into her daily life. You will be inspired, as well as motivated, by sharing this in-depth look at the special bond she and her husband Chooch share, in giving to Jimmy an optimistic and realistic blueprint, for a full, happy life and a bright future.

You will laugh, you will cry, you will be raised to great expectations for the possibilities of life in the face of adversity as you share one woman’s enduring odyssey with her child. From her joy at the birth of her precious child, to the unrelenting challenges of daily life that confront both parent and child, you will be left with both a full heart, and a renewed sense of wonderment at how we can all rise above adversity and achieve miracles, through dedication, determination, and of course, unconditional love.

Marie Kennedy is a wife, mother, motivational speaker, and freelance writer. She is published in numerous online magazines and has been a guest speaker at schools associated with the program "Everybody Counts." She has also been a speaker at hospitals, child advocacy conventions, and Universities, providing the human side of Cerebral Palsy to therapy and medical students.

Marie is a member of the NLAPW (National League of American Pen Women) and recently won a short story writing contest with Jimmy's New Shoes, which will be published in Chicken Soup for the Mothers Soul 2, available April 2001.

The Kennedy family was taped for a regional (state of Indiana and Louisville, Kentucky) PBS show, Across Indiana in May of 2000. The show has aired several times on PBS WFYI channel 20. For more information refer to show number 1028, WFYI website

Marie welcomes emails and letters. She can be contacted through her website www.mariekennedy.com, Email MarieKennedy@aol.com, or write to Marie Kennedy PO box 71 Carmel, Indiana 46082-0071.