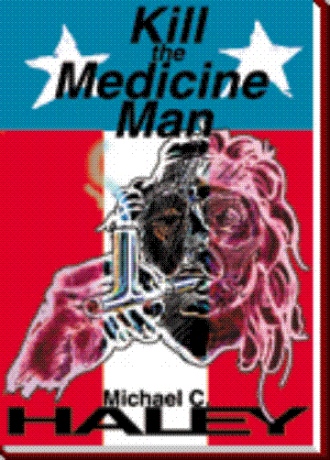 'Navajo know this rule, Captain Pfeiffer.' My tone was not respectful. 'Navajo know reservation rules.' I paused because I knew I might ignite the revenge in this man who was consumed by hatred. I remembered when Choto had named Pfeiffer the Stinging Wasp as he led the massacre at Canyon de Chelly. Choto had said Pfeiffer rode with vengeance in his heart that day. I saw his heart still smoldering with hatred. 'We want American rules, not reservation rules.' I reckoned this might be the last chance I would get to talk to him. I kicked the wasp's nest. 'I want rules most American, not soldiers, live by. Navajo must learn other rules so live like other American live.'

'Sergeant Calahan!' Pfeiffer bellowed as he bolted to his feet.

Calahan flung open the door, 'Yes sir?' A shotgun lay in the crook of his arm.

'Take this stinkin' dog out'a here. Use him to translate orders to the work gangs. Watch him close, Calahan! This mangy buck's goin' to give us trouble. Kill'im if he does!'

'Yes sir!' Calahan moved to put a hand on me.

I stepped towards Pfeiffer to throw Calahan off stride. 'I no work gangs! Jesus Arviso talks gangs. I medicine man,' I said proudly. I found myself staring into the muzzle of Pfeiffer's pistol. 'We want know rules for livin' like most American! I speak for council leaders!' I had no such authority to speak for the council of elders, but I needed some power badly now. These English words were all I could think of.

Pfeiffer eared back the hammer on his Colt. 'Sergeant, lock this shit in the stockade for disobeyin' orders!' Triumph spread over his pink face. 'Hold'im in solitary confinement until he's broke.' He jabbed the muzzle of his pistol against my forehead. He squeezed down on the trigger. 'Kill the medicine man!' The hammer clacked on an empty chamber.

Navajo medicine man, Yetso, flees from his home as Kit Carson's army sweeps Canyon de Chelly in January of 1864. Yetso escapes the invaders, but his clan and family are captured. His wife is sold into slavery. He must fight for revenge and to rescue his family. Instead, he's caught in the middle of a war to prevent the genocide of the Navajo.

While the army herds the Navajo to the Bosque Redondo prison camp, Yetso pursues powerful medicine to defeat the white man. He discovers he must also learn the craft of American statesmanship, the arts of patience, maneuvering, bribery, threats and trickery.

Yetso organizes the Navajo Council to resist the sure, slow extinction of his people on the Bosque Redondo reservation. He gives hope to the Navajo as he seeks to restore Hozho -- happiness, health, the beauty of earth, and good relations among men. He raids for supplies, and rustles cattle to feed the starving Navajo. He challenges the brutal Commandant of the reservation and is thrown into solitary confinement.

In his quest for the freedom of his people how will Yetso survive prison, save his young wife, and kill the renegades that threaten freedom for all the Navajo?

This exciting and compelling saga is about one man's transformation as he fights the battles of the oppressed that continue to rage in the world today.

Michael C. Haley writes to entertain, to tell good stories. Haley starts with Yetso in mortal trouble and develops how he combats it. Events transform Yetso. His identity is forged. Throughout Yetso's ordeal, you learn about Navajo and American history, western lore and the southwestern countryside. You wrestle with worthy thoughts and emotions as Yetso uncovers and develops his beliefs. You observe him struggle and suffer to achieve what is right. And all the time, someone is trying to kill the Medicine Man.

Michael C. Haley was born in Albuquerque, and grew up in Los Alamos, New Mexico. His youth was spent in canyons and pine forests with an army Jeep, dog and black powder guns. In the mesa country he hunted Indian petroglyphs in the caves and ruins from Bandilier to Puye and along the Rio Grande River. He spent summers and vacations on a northern New Mexico ranch. He wrangled horses for a resort. Haley has been fascinated by and has studied the Indian, Spanish and Anglo histories of the southwest all his life. He has traveled the back country trails extensively, and has gathered the anecdotal and technical skills for writing quality western adventure stories.

Michael C. Haley graduated from St. John's College, Annapolis, Maryland, where he studied classical liberal arts. After serving in the Navy as a Commissioned Officer he graduated from the University of New Mexico School of Law. He built a commercial investment real estate business and has had his own successful company for thirty years. During his business career he became an international lecturer, seminar instructor, and executive career management consultant.

Michael C. Haley has written Durango Gold, The Gold of El Negro, Bandit, Kill the Medicine Man, and Troy's Gold. His intention is to impart knowledge and western lore and inspire the reader through the transformation of his characters.