They Called Me Syrup Sopper 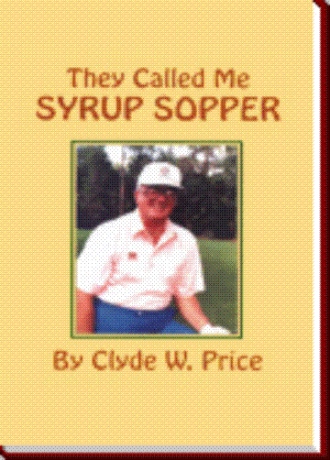 He was born on July 20th, 1886 in a small farming community called Fruithurst. Walter Marvin the fourth child and third son of Frank and Malinda Price, he had two older brothers named Oscar and Samuel and a sister named Minnie. Fruithurst was located in the extreme eastern part of Alabama near the Georgia Line in Cleburne county. Very little is known about the first seven years of his life, however my story will begin in the year 1893. That was the year my grandfather decided to take is family, all of his farming tools, and household goods, load them in his two horse wagon which by the way was pulled by a team of mules, and move to Cullman County. He loaded everything he could on the wagon, tied his cow behind and with the family dog following, set out for Cullman County a distance of about 150 miles. The journey was a hard one, taking about two weeks. Some nights they would arrive at a farm house, where they would be invited to feed the animals, enjoy a hot supper and share whatever bedding was available. When no overnight hosts could be located the Family would set up camp preferably near a stream of fresh water. When Frank Malinda, Minnie, Oscar, Sam and Walter along with the mules, cow and family dog, Jack, arrived in Cullman County they rented a small farm in the Southwest Corner known as the Trimble Community. They lived there for about two years when Frank decided to take the family to another more suitable location. He purchased 160 acres of land about 7 miles north west of the town of Cullman, the County seat. He and the older boys set to clearing land and preparing it for their first crop to be planted in the spring, at the same time they were busy building a house, barn, corn crib, chicken house and of course a two holer outhouse. Papa, Walter, my father was seven years old at the time. He lived in that house until he married my mother on December 10, 1910. When he was nine years old his mother died leaving his father, Frank alone with the four children to raise and a newly settled farm and home to establish. Later my grandpaw Price married a widow, Sarah Ann Pullen. She had one son Arthur. I don't remember Papa talking very much about his mother, but I did hear a lot about Sarah Ann, his Stepmother. I don't think he liked her very much. I say all of the above just to illustrate how in my fathers lifetime so many drastic changes in the lives of Alabama people have occurred. In the 89 years of his life from 1886 to 1975 we went from the horse or train as the only mode of transportation to the moon. Speaking of the land, Papa told me that my Grandfather paid $500 and a mule for the 160 acres. When I was growing up the old, original very small house was still standing. We called it the renter house because Papa would usually have a share cropper family or some laborers living there, especially during fall cotton picking time.

This is the true story of a boy, born and raised on a poor farm in rural North Alabama. In it he reminisces about his hard-working family and their struggles to barely survive during and after the great depression of the thirties. It is about his determination to acquire an education, his career in broadcasting as a country music disc jockey and radio station owner and manager in Tuscaloosa, Alabama. This is about how he at nineteen years of age and his young wife, also nineteen, began from nothing, then retired after forty years as multi-millionaires.
The author intended to write a series of comical stories, things that had actually happened to him and his friends, but in doing so he gets into a serious discussion of some of the not so funny things that happened to him as he pursued his career. His discussion touches on his relationships with friends, family, employees, government, famous broadcasters, politicians, and sports figures, including Coach Paul 'Bear' Bryant.

The ending chapters describe his almost unbelievable number of health problems from cataracts in his eyes to a leg amputation. The reader should find this work to be easy reading. It was meant to be a funny story, but in case you find something in it that is serious, so be it. We think you will enjoy They Called Me Syrup Sopper.

Clyde W. Price was born March 26, 1932, the seventh child of Walter and Gertie Price, on a small farm in rural Cullman County Alabama. The house in which he was born had no electricity or indoor plumbing but his was a family that was close knit and bound together by loving parents who did the very best they could raise their children to appreciate their God and Country.

He was educated in the public schools of Cullman County, Auburn University, Saint Bernard College and the University of Alabama.

He began his broadcasting career at 16 years of age as a part-time announcer on WFMH in Cullman. While attending the University of Alabama, he worked as a Country Music Disc Jockey. That is when his listeners first began calling him Syrup Sopper. After graduation he served in the army Signal Corps for two years. He returned home to resume a career that would offer him an opportunity to become a radio station owner and manager.