A Lilly Among the Tares 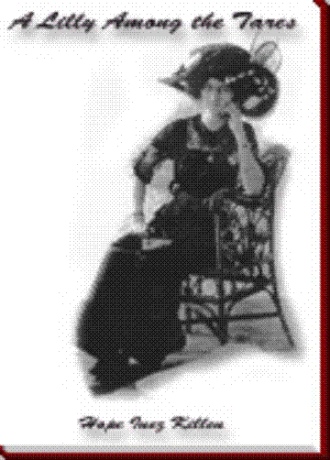 'ZETTIE, I'M GOING TO COLLEGE SOME DAY!' 'Going to college?' exclaimed the little sister of ten summers. 'You must be crazy, Anita. Only rich people go to college. It takes heaps and heaps of money to go away to school.' 'Yes, I know that,' answered the elder sister, 'But I am going some day. I feel it in my heart.. I do want to go so badly, and I just received a catalogue from a big college away up in Missouri. Oh, I do want to go there so very much. I am only fourteen years old now, and I'll not lose a minute's study until I am eighteen, and I am sure that I will know enough to go then.' 'But what about the money?' asked Zettie. 'Papa is the poorest man in this whole country, and wouldn't let you go even if he could.' 'Hell, I don't know where the money is coming from, but I know it is coming, for I think God would be unjust to deny me this one prayer that I've prayed so long and earnestly.' 'Why, sister, have you had this silly notion in your head very long?' 'Oh, so long, so very long, dear. What do you think I've been doing sitting up at night over a few coals of fire, ruining my eyes learning that one old history?memorizing it with the few others I have? For, oh, if I just only had books; if I could just get Papa to see the necessity of our having books to attend school with, but I don't suppose that he and Mama will ever see things in that way. They have lived out here so long, 'where the poor people are not supposed to have an education,' as Mama says.' 'It's pure old meanness in Papa, or else he'd get you books. He is plenty able to do that and spends lots of money every Christmas for whiskey and other old trashy stuff,' pouted little Zettie. 'Hush, darling, Christmas just comes once a year, and what little he spends then wouldn't count up to much, and besides, that's the greatest enjoyment he has after his year of hard labor. So I don't think it is meanness, Mama and Papa just can't see and understand the good of an education. 'Whenever a man comes out into these woods, who has a little learning, these people call him, 'a stuck up, good-for-nothing dude.' But I am sure they will appreciate it, and be ever so proud of me when I come home, a fine young lady in my beautiful graduating dress. Just want everybody to think I am grand, dear little sister,' Anita said as she jumped over the grass to kiss her younger sister on top of the head. 'Ha! Ha! Why, sister, you certainly do amuse me. You act just like those crazy girls did at Miss Vredenburg's school exhibition when we were at aunt's last spring in Cedartown.' The little girl looked her sister over critically, and then threw back her head and, laughed long and loud. 'Just look at those old shoes of Papa's you've got on!' she exclaimed. 'Just picture yourself in a fine college away off in Missouri in that garb.' 'Now, Zettie, please don't do that,' pleaded Anita with tears in her bright brown eyes. She looked serious a moment, then slightly straightened her shoulders as she said in a low, yet positive voice, 'I know it's a long, long jump to expect to take, but I am quite sure that I'll get there some time.' 'Well, I do hope you will, but I don't see a grain of a chance for you, so you had better get up and hoe another row of this grassy ol' cotton. We've been sitting in the shade too long now and Papa would skin us if he knew it.' This was a conversation which took place between two sisters, Anita and Zettie in the far-off hills of Louisiana, under a spreading sycamore tree that stood at the end of the rows of cotton being cultivated by their father, old man John Lingerpost, better known in the community as 'Crab Apple,' on account of his sour and crabby ways. It was a hot June day, and the children had stopped a while in the shade to rest after hoeing 'a round,' as they called it, which meant from one end of the row and back again on a second row. They were the only help their father had at this time. Although they did have some older brothers, they had grown up uneducated and unprepared for the world, so could earn very little. Consequently, they were not much help to those left at home.

This story is an autobiography, but written as a work of fiction, using imaginary names for the actual persons and most of the towns. The original author, Hope Inez Killen, was born in 1884, passed away in 1956 and her family buried her in Pineville, Louisiana. Most of the events described in this story actually took place. For instance, her brother, Lawrence (Fred) really was killed in a lumber mill accident and left a life insurance policy in Hope Inez's favor. His monument, a Woodmen of World concrete tree, can be seen along with the graves of many other family members in the Old Red Hill (now called Dark-Neal) cemetery some five miles northwest of Boyce, LA. The town of Cedartown, in the story, is the name she gave to Boyce.

Ten miles down the Red River is the real town of Alexandria, which she called Centerton. In the 1890s, the hill country of central Louisiana was covered by a forest of Long Leaf Pine, much as she described in the story. This story chronicles Hope Inez's struggles to get out of the woods, get an education and to make her way in a working world, dominated by men, that definitely was not very women-friendly. Anita (Hope Inez) suffered many miseries but her Irish determination did not let her waver. As far as we know, she did not attempt to publish her manuscript. Instead, she passed it on to her sister, Zettie (Roberta), who left it to the eldest of her two surviving daughters. For a number of years, the manuscript seems to have been in limbo. At last the daughters, both now living in central Louisiana, resurrected the old, fading and yellowing pages and read Aunt Sudies book (Hope Inez' sister, Roberta, had nicknamed her Sudie when they were children).

A cousin, who had authored several textbooks, also became interested in Hope Inez's story. He instigated family interest and the decision was soon made to attempt publication while making as few changes as possible in the original manuscript. A Lilly Among the Tares is the result.

The reader is asked to consider the conditions that existed in Louisiana at the turn of the century and not judge Anita's innocence and naivete by today's standards. Rather, please bear in mind that she was reared in the remoteness of the 'piney woods,' that her parents had a desire to 'hide out' and that the availability of transportation from any given place was usually difficult, non-existent or unreliable at best.

When reading her story, enjoy the light of her spirit and the strength of her faith in God that shines through every page.

Hope Inez Killen was born in 1884 and passed away in 1956. She was buried in Pineville, Louisiana. The Killens were Scotch-Irish, emigrating first from Scotland to Ulster and then on to Delaware. Successive generations followed the Appalachian Trail southward and then west. Hope Inez was one of a family of nine. She wrote profusely and contributed articles to local newspapers. A Lilly Among the Tares was written about 1910 and never published. It provides an insightful look at this period, particularly from a woman's viewpoint. Hope Inez Killen (Anita) was one of those increasingly rare people who never gave a moment's thought to what anyone's opinion of her might be. After the fashion of the 'grandes dames' of another era, she was busy forming her own opinions and they were acute. She was 'outgoing' in the great old sense of keenly observing the world around her, and freely speaking her mind about it. In short, she was unashamedly an individual, and her family and friends admired her for it.