The Ghosts of Antietam 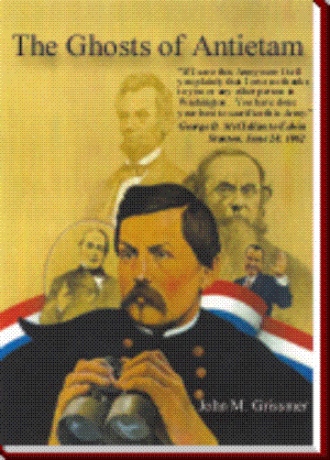 Later that day George accompanied Hooker as that officer took his First Corps across Antietam Creek and into its attack position three miles North of the enemy's left flank. Hooker's normally blotched face was lit up more than usual in the smoky afternoon sun. A breath of whiskey floated between their horses.

'I'll open up on 'em, General. But if I get stopped, don't you dare leave me hanging out there. You hear? If they start chewing me up, give me supports when I yell for 'em.'

'You shall have them,' George pledged. 'I'll put Mansfield's Corps across the creek by the time you attack. Remember, Joe, you command the field, despite seniority.'

'Well, all right, but make sure Bull Sumner knows that. Is he coming across the creek today? By God, I wish it was anybody but him. He nearly got me and Phil killed at Williamsburg, sitting on his ass and leaving us in the lurch. And who's this Mansfield with the Twelfth Corps? Hell, he just got here. You're sure I can count on him?'

Hooker was wearing all his nerves outside his uniform today. 'I haven't decided when to commit Sumner,' George said, 'probably tomorrow morning, but I'll need him to reinforce our center until I'm convinced it's secure.'

'Hah! So you don't want weird Tom Jackson popping up on your flank, eh?'
'Exactly so. As for Mansfield, he's an honorable old soldier. He'll do his duty. But you're the one I'm counting on to whip them, Joe. Live up to that unspeakable nickname of yours.'

'Let it remain unspoken,' Hooker replied with a gusty laugh.
'Well, I've been called worse,' George said. A simple statement of fact.
They were approaching a tall, waving stand of trees. Dimly in the far background to their left George could see the edge of the Confederate line marked by flags, campfires and glinting artillery.

'I'll leave you here, General Hooker. Be sure to stay in close touch with my headquarters. Set up a signal flag station on the best high ground you can find.'

Hooker snorted. 'I will, General. And tomorrow I'll drive 'em into the damn river.' He frowned. 'If they don't kill all of us first.'

George reached across between their horses to lend a steady handshake. He then faced Dan Webster around to the East, flipped a quick salute and dug his heels into the eager animal. Joyfully, Dan Webster got to do what he loved best, run like fury with George along for the ride. As horse and General streaked along the endless stream of marching blue ranks George twirled his cap at them.

George strolled over thick grassy lawn of Farmer Pry's home headed toward the overlook. Behind him he could hear the clink and chatter of his headquarters staff as they finished their supper.

He looked out into the forbidding darkness and felt a light, misty drizzle on his cheeks. Careful, don't fall over. He had ordered that no camp fires burn tonight.

Bobby Lee was not shy about showing up his position. There he sat, two and a half miles off, his Army arranged in a defiant line of resistance, his back to the Potomac, his fires sending out a clear message. 'Here I am, Mac. Come and get me, and see what fatal surprises I have in store.'

George had eaten only a few crackers and some watery bean soup, no wine. Yet his stomach and bowels were already wrenched and grumbling. Perhaps a little brandy later, in order to sleep.

From this elevation the last of the gray-pink Western sky now had faded. Below in the valley of the Antietam, the two facing armies seemed to heave and breath in unison in the misty dark. Through the fields and the mysterious woods and on into the enemy lines, the night was alive with movements felt but unseen, the clanking noises of artillery and wagons, a stray crack from a picket rifle, a shouted challenge, a melancholy howling dog.

He knelt down, tried to pray. No words came. Strangely, without knowing why, he bent forward and put his nose to the grass, breathed in the deep, wet smell of the soil of Maryland. Oh, God, it would be nourished by blood in the morning.

He rose up, brushed the dampness off his knees. Silly thing to do. He saw Nelly's face, experienced the perfume of her hair, felt the spreading pressure of her breasts. No, put those thoughts away. By this time tomorrow the results would be known. He would either be victoriously alive or beaten and dead in his boots. He had no wish to live beyond defeat. Whatever the outcome, Nelly and his little daughter would bear his name with honor.

He went to his tent at the edge of the lawn. Opened the flap. A dim candle burned within. He would close his eyes for a short while. He would put out some cavalry to look for Tom Jackson. It wouldn't do to be surprised. 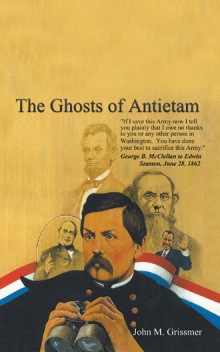 Just received a telegram from Halleck stating that Pope and Burnside are very hard pressed -- urging me to push forward reinforcements and to come myself as soon as I possibly can . . . Now they are in trouble they seem to want the 'Quaker,' the 'procrastinator,' the 'coward' & the 'traitor.'

What If?
Abraham Lincoln dies only a few days after becoming President. Vice President Hannibal Hamlin takes over the office and then hastens to Charleston, South Carolina, in a desperate attempt to avert civil war. Accompanying him as military advisor is a brilliant young general.

The Ghosts of Antietam is an adventure in alternate history which takes a fresh look at the Civil War through the eyes of one of its most maligned characters, General George B. McClellan.

The novel poses questions. Was the bloody conflict truly inevitable? Was McClellan a traitor or a hero? Would Hannibal Hamlin have made a better President than Abraham Lincoln?

At Charleston George McClellan saves Hamlin from death at the hands of a rabid secessionist and enjoys a vexing flirtation with the beautiful Mary Chesnut. After seeing a tragic example of what civil war would be, McClellan urges Hamlin to make a courageous political maneuver which lures Jefferson Davis back into Union and dooms the Confederacy.

But later McClellan is shocked into the realization of an alternate world in which the war actually did take place. George McClellan now relives his wartime odyssey of conflict with Lincoln and the devious, vindictive Secretary of War, Edwin Stanton.

The Ghosts of Antietam is an adventure of conflicting realities in which President Hamlin ends slavery without war, and George McClellan attempts to save Lincoln from assassination with surprising results.

Or as the ghost of Edwin Stanton says to Vice President Richard Nixon: 'It's not the same old bullshit they put in the history books.'

John Grissmer has filled many roles. He has been an actor, professor of drama, film producer, writer and director, U. S. Army officer, playwright, business executive, theatrical producer and novelist.

Some years ago he pondered two questions. Was the Civil War truly inevitable, and had George McClellan been fairly treated by history? The search for answers to these questions led him to write The Ghosts of Antietam.

Currently a consultant and guest director in the Performing Arts Program at Xavier University, he has recently completed The Perfect Game, a musical play about the invention of basketball.