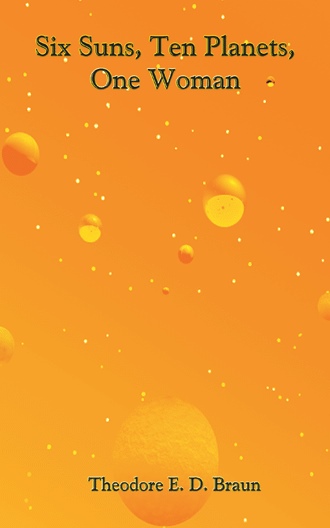 'Boris, do you see anything out there?' she whispered. This planet has no moon, she thought. No moon, no light at night, clouds all the time. It's creepy.
'No, Christina. But I hear people-someone or something- breaking through the brush.' 'People? More than one? How many?'
'Sounds like a patrol. Maybe five or six.'
Crack! A branch of a méki bush, dry, low, brittle. 'Damn it, Srethims, be quiet,' said a hoarse voice in the dark. 'We know they're around here somewhere. We need to get them before they get us.'

Christina held her breath, as did Boris. Are we being set up? Are they trying to lure us out of hiding? Do they expect us to fall for that old trick?
Suddenly, from across the meadow, a shout rang out. 'Get 'em now, the bastards! They're over there!' The quadrant rushed towards the trap.
What the hell is Cardeño doing? He'll blow our cover! He'll get us all caught! Boris and Christina took advantage of the noise and ducked down further under the wide méki that was covering them.
A bright light came on, then another, then the field was lit up like a ball park. Cardeño, realizing his error, compounded it by opening fire. A ray from his gun missed the Militia leader and struck the méki, just at the spot where Boris had been hiding. Cardeño's shot was answered by several blasts. Four more dead; that makes nine so far. A double squad went out into the light, there were 12, 15, 16 Primmies. How many more were still lurking in the hidden recesses of these woods?

'We still don't have the big cheeses. Look at this: three men and a woman, not one even a sergeant. Keep an eye on the area, Mezclan; they can't be far. We'll catch 'em at dawn.'

'What should we do with the carcasses, Deacon?'
'Leave them alone. The wolks'll swoop down and eat them. I can smell them coming already, even if we can't hear their wings.'
Mezclan admired this kind of thinking. After all, these are infidels, or moderns, which amounts to the same thing. They don't deserve any better. They wouldn't want to be buried like proper human beings anyway. Still, the wolks were fierce. They began with the eyes, then the throat; after that, he couldn't bear to look any more. If any of the quadrant's alive, the wolks will take care of that in a hurry.

The Deacon and most of the crew left. Boris and Christina could hear another guard element behind them, in the forest. In front of them, the lights out again, everything was dark. But, God, the stench! The horrible sound of flesh being torn apart! The cries and the in-fighting of these disgusting flying lizards pierced the still of the night. The cloud cover chose this moment to break up a bit, and the dim light of the stars let the pair see the chilling sight of the carnage. Their crew members! Their comrades!

Suddenly, it was all over. The incredible silence of this strange world rolled in like fog.

Christina woke with a start. The first light of the Mesnosian dawn cast a grey pallor all around them. Boris was asleep; she gently shook him, then covered up his mouth with her hand just as he was about to utter some sound. 'Shh. Let's take a look at where we are and see if we can get out of here.'

Before them, gleaming bones caught the light of the first sun rising. Little mouse-like carnivores were finishing up the job the wolks had started. Probably what they call stots. Above, bad news. The clouds were all gone for the first time in almost a month. The sky, blue, white and orange, prom ised a very hot summer day, especially when the second sun would rise above the far horizon. Worse, the thin foliage of the mékis couldn't hide them for long. They'd have to move fast.

Christina Vasa becomes a member of Spacefleet’s Extended Life Brigade. Her mission is double: fight the Militia (a terrorist organization of misguided religious fanatics opposed to scientific advances in general, in particular, the genetic engineering that makes extended life possible), and explore the galaxy for possible colony planets and for intelligent life forms. In her adventures in other worlds, Christina will face death several times, will be charged with capital crimes, and will take part in the discovery of new worlds on which millions of Earth people will establish cities and farms. She will discover rich new worlds of biology, also, worlds in which evolution has gone down different paths than it had taken on Earth. Some of these encounters will prove to be terrifying, even life-threatening: a deadly virus, fierce jellyfish-like creatures that hunt in packs, flying creatures that devour their victims’ flesh within minutes. With her crew she will fight the vicious members of the Militia, although final victory seems out of reach. But why is she arrested on Mars after returning as a hero from a successful expedition against the Militia on Mesnos? She will finally pass through a wormhole to reach the spiral arm on the far side of the galaxy. There, at last, she will encounter the Damosians, a civilization of intelligent beings descended from warm-blooded lizards. Will this encounter be peaceful or menacing? How will people of radically different cultures and languages be able to communicate? Will the dreaded Schadite Tactical Units succeed in destroying the great ship Constellation? If they return to Earth, how will the people there accept these extra-terrestrials?

Brooklyn-born author Theodore Braun holds a Ph.D. in Romance Languages and Literatures from the University of California at Berkeley. He is currently a professor of French and Comparative Literature at the University of Delaware, where he teaches a course on Literature, Science, and Technology. His research interests include the author Voltaire (author of a science-fiction novel a, Micromégas, 1752) and chaos theory. He has been interested in astronomy and evolutionary biology for virtually all his life. Six Suns, Ten Planets, One Woman combines his vocation and his avocation, his deep love of literature and his keen interest in science, his experience in research and his creative imagination. Braun lives in Newark, Delaware with his wife. He is grateful to have a daughter as interested in science and fiction as he is, and whose critiques have proven to be invaluable.