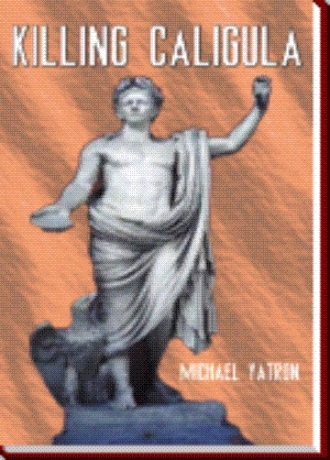 Caligula's fingers relaxed and trickled over her neck in a caress. Then he bent and kissed her neck. ' You have such a beautiful head, Caesonia, my love. Such a beautiful head.' The relief that swept through every pore and muscle of Caesonia's body was visible. She reached back to clasp the long fingers which had returned to her neck. 'I'm so glad I please you, Gaius Caesar. ' She pulled at Caligula's hands to kiss them.

' You have a beautiful head, dearest,' Caligula repeated. ' But keep in mind one thing, dear Caesonia. Always.'

Caesonia, relieved by his affectionate tone, responded by more alternate kissing of the slender hands. ' What should I keep in mind, Great Caesar? What, Lord of the World ?'

' Off comes this beautiful head whenever I give the word!' Again terror. Caligula had become obsessed of late with the human head. He couldn't abide a handsome one because he imagined that his loss of hair was increasing. Chaerea had heard that one of the executioners who was especially skilled at cutting off prisoners' heads, had been commanded to perform while Caligula had lunched with Caesonia. Chaerea had heard of several Patricians who had the backs of their heads shaved at Caligula's orders so that they might become laughing stock.

' Let them go about their business. But no clothes, only a cloak. A Tribune's cloak.I want you to ride into the Forum with the Tribune so that Rome can see you.'

Caesonia rose and padded barefoot to her cathedra. Caligula rose also. ' That's a great deal of woman, Tribune. Look at those hips! Look at those thighs. There's only one thing she likes better than spreading her thighs and that is keeping them spread and being pounded and shaken till she's black and blue--with a Spanish fly hard-on! Have you ever tried Spanish fly?'

Chaerea couldn't say that he had.

' It's actually made of the ground bodies of flies. Some say that it is physically harmful. But not to a Caesar. Caesars are made of different stuff. I will admit it is irritating but there can't be great pleasure without great pain.'

Killing Caligula is a fictional account of the assassination of Caligula, the maddest of the mad Roman Emperors by the man who historically masterminded and did it. Insanity can be fascinating.

Dr. Michael Yatron read many books and modeled his life on travel, adventure, danger, and romance for twenty-one years. He is easy to read and he has written both to entertain and to enlighten. To enlighten is the more important for the young. So he provides a first rate mind, a hard ring of truth, and writing from the gut that educates the reader about himself, other people, and the world he lives in.