The Invisible Cross of Two Fish and Seven Loaves 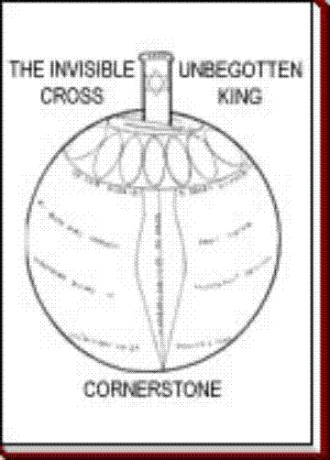 Biblical references were applied to large stones as being used or set up to commemorate any remarkable event. 'Heaps of stones were piled up on various occasions, as in token of a treaty'; from Peloubet's Bible Dictionary, 'or over the grave of some notorious offender.' The 'white stone' referred to in Revelation, chapter two, is explained by some as the pebble of acquittal used in Greek courts; however, again the phrase 'white stone' is used also in reference to some accounts of the pyramid and the temple of Serapis. Stones are used metaphorically to denote firmness or strength, members of the Church are called 'living stones' as was Christ Himself referred to as the chief or head of which He was its 'cornerstone'.

There are as many varieties of the cross as there are titles of Christianity or Christ had disciples. Originally the cross was considered as a symbol of a slave's death and a murderer's reward and considered with passionate horror; yet, after Constantine's 'vision' he ordered friends to make a cross of gold and 'gems' as he had seen, 'the towering eagles resigned the flags unto the cross,' and 'the tree of cursing and shame sat upon the scepters and was engraved and signed on the foreheads of kings.' (Jer. Taylor, 'Life of Christ,' jjj, XV. 1.) There are other accounts of this historical event. That is, the new standards were called by the name Labarum, and may be seen on the coins of Constantine the Great and his nearer successors; yet, Reader's Digest gives a somewhat different version of this story. Legend has it that Christ suffered upon a Latin cross in which His 'title' was placed above the cross-bars above the head and inscribed upon a white gypsum covering, most likely similar to our modern 'sheetrock', without the paper, (a sedimentary form) and written in black lettering, most likely from a charcoal material. The consideration of the foregoing thought may give this quote from Acts of Andrew, apocryphal New Testament, a somewhat different rendering, 'O cross, planted upon the earth and having thy fruit in the heavens!', suggests that God had intentionally meant for man to be confused and misunderstand parts of His message, allowing fulfillment of His test. To me, Constantine's cross was his own invention, used only to symbolize his crossing the historic Milvian Bridge in 312 while marching toward Rome in his conquest for becoming emperor and his insatiable appetite for Maxentius' blood. Apparently Constantine never wrote a book, for if he had, it most likely would have been included in the New Testament. Perhaps he did but the neophytes couldn't decide whether it should be included before the Gospel according to Matthew or inserted after Revelation, so it was just left out. As in modern times, Constantine ordered assaults on pagan sinner cults by destroying and looting their temples to embellish his own cause.

Nothing could be more devastating or apostatizing to one's belief system, at the age of 5, than to witness the execution of your dad under the orders of your uncle, 'the Thirteenth Apostle.' This was the circumstances of Julian, successor of Constantius, the last surviving cousin from Constantine's three sons who had inherited the empire. Julian ruled for only a short period of time (361-363). He was known in history as the emperor who tried to restore paganism as the official religion of the Roman Empire. He thought that Christians were nothing but 'superstitious atheists' who worshipped 'a new-fangled Galilean god.' He was convinced that his uncle Constantine had destroyed Rome's traditionally orthodox religious values. He had the pagan temples reopened and had the Christian emblem (Chi-Rho) removed from the legions' shields. He forbade Christian professors to teach the classics of which he was a passionate and ardent admirer. According to some authors, despite all of Julian's enthusiasm for paganism he never managed to restore worship of the ancient gods as the dominant religion of the empire; yet, the source continues within the preceding paragraph, 28 years later, (363-391 that Christian tolerance for paganism still practiced by many, if not most in the empire, had worn thin. This was prior to the Christian mob who raided the Serapium, possibly at that time the largest place of worship in the world. During its raid the legions are depicted as carrying shields with the Chi-Rho symbol upon them. It seems fair in the midst of such contradiction to question which is most truthful, 'When the cross appears, the Temple of Serapis will be destroyed' or, when the stone sculpture of Serapis' bust is removed, the cross appeared?

He considers himself to be a common man. He is a mystic writer, mathematician and philosopher, and as genuine as a day is long. He has spent twenty years studying his subject of which he has authored four different short books containing similar yet different themes, as an extra attempt to get his message across. His authorship is done under a pseudonym of 'King Asod,' which is the abbreviation for 'a son of David.' The titles of the booklets written are:

1. Behind the Asylum Curtain

3. Fragments of the Ancient Glyph

4. The Invisible Cross of 2 Fish and 7 Loaves

From out of Egypt into Jerusalem, teaching them as he traveled, as many as those believing in him and his Divine call. His developed system, a symbol represented upon the Ruthwell cross which he considers to be the Holy Grail of his Father's house, which is nothing more and nothing less than the scientific and mathematical implications suggested by the star of David. This so called Alpha-Omega numerical system enumerates the time of day with the radial degrees of a circle. The discovery to the existence of his number, .31578947, allowed him to conclude this about planet earth's axial rotation.

This system of information clearly exposes the evidence of a mathematical message intended to have been delivered within the Living Word. These numerical manifestations of metaphysical regeneration are indicative (proof) to the presence of a Divine Being to exist among us. Its concept clearly showed the reality of Plotinus' unknowable 'Good One' of the natural universe; therefore, he claims this title, 'he is the invisible one of the universe whose cross exposed its cornerstones and by the sword of his righteousness.' His concept seems to originate from where Merlin's 'left off' in the tales of King Arthur and suggests that the accounts of Oedipus are unreliable since he also claims to have correctly solved the almost six thousand year old riddle of the sphinx which is most famous for asking this question, 'What animal goes on four feet in the morning, on two feet at noon, and on three feet in the evening time?'

While these facts ascertain truth, or the pursuit of it, his physical existence within the physical universe is explained in the apocryphal New Testament literature as being of an appalling character, an abomination which was sent to earth by 'an evil one.'