by A. Max Abel 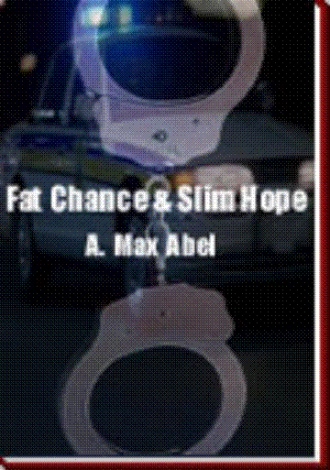 In the sterile little room, Hope plopped down on the straight-backed chair in front of the tacky desk. She noticed the outdated multi-button telephone and an ancient computer terminal that hummed and flickered in the far corner. Neither inspired her confidence.

The big guy circled around her and sat down on the other side of the desk. The longer she marveled at his immensity, the larger he seemed to grow, like some sort of hypnotic optical illusion. She put her thermos on the desk with a thud. That broke the spell.

He looked down at the thermos. 'What's the problem?'

'I was kidnapped this morning,' she said to the brown hair on top of his head. She looked down and wrung her dirty hands in her lap. Perhaps she should have reported this matter to her employers.

From above her tousled head she heard him say, 'By whom?'

'I don't know.' She shook her head, but couldn't raise her eyes to meet his.

'All of them ---' she started to say, but she was interrupted by an unexpected flash of fearful thought '--- I guess!'

'What did they look like?' His manner was routine. His reassuring Midwestern radio voice calmed her.

'Soldiers,' Hope said, 'Two men ... one woman ... They all wore Army clothes.' She peered up through her eyebrows at him.

The brows above his warm brown eyes betrayed his growing interest. 'Any names?'

'They called one man ...' She tasked her memory of the awful event which she had been trying so hard to forget. ''Nelson.' I didn't hear them call the other guy by name, or the woman either.'

'What sort of masks did they wear?'

He leaned across the little desk toward her. 'Where was this?'

'Right outside Lincoln Hospital, where I work. I was on the way to my car. They threw me in an old brown van.' Hope felt much better. This FBI man was taking her seriously.

'Who paid the ransom?' he said, as though he was filling in the statutory requirements in his mind.

'Escaped?' He looked dubious. His look took all the wind out of her sails. He didn't believe her anymore.

'With a bumper jack.' She realized how really stupid that must sound to someone who wasn't there.

'With a bumper jack?' The tone of his question made her story sound even more foolish than she feared. She felt her face flush. The tepid air felt cold on her moist skin, but she forged ahead. 'I broke open the back doors with a bumper jack ... jumped out at a light.'

He studied her for a moment, then he too forged ahead. 'Did they demand ransom?'

'No,' Hope said. Then she thought better of that answer. 'I don't think so. I called my folks; they're on vacation in Las Vegas. I don't know.'

'No.' She grew puzzled by that question.

'Got a 'significant other?''

'A what?' He seemed to be changing the subject.

Special Agent Chancellor's life goes out of control when his new boss is more concerned with the FBI's strict weight limit than with his accomplishments.

To make matters worse, a reed thin woman who escaped her kidnappers is snatched again while in his care. Then the abductors kill an intended kidnap victim who resists.

Despite orders and regulations to the contrary, Chancellor takes off after the wrongdoers in a desperate romp outside his jurisdiction. Fleeing the fat catchers while trying to dismantle a powerful criminal cartel, Chance develops a love interest in the woman he hopes to rescue.

A. Max Abel is the penname of a 20-year veteran of the FBI who conducted several investigations of kidnappings while being tormented by the FBI weight requirements and those who enforce them.