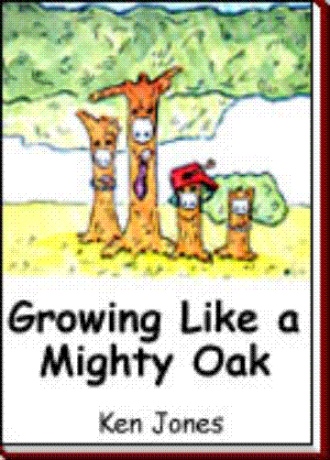 Now the earth was corrupt in God's sight and was full of violence. God saw how corrupt the earth had become, for all the people on earth had corrupted their ways. So God said to Noah, 'I am going to put an end to all people, for the earth, is filled with violence because of them. I am surely going to destroy both them and the earth. So make yourself an ark of cypress wood; make rooms in it and coat it with pitch inside and out.

Daniel answered, 'O king live forever! My God sent his angel, and he shut the mouths of the lions. They have not hurt me, because I was found innocent in his sight. Nor have I done any wrong before you, O king.' The king was overjoyed and gave orders to lift Daniel out of the den. And when Daniel was lifted from the den, no wound was found on him, because he had trusted in his God.

Growing Like A Mighty Oak is a coloring book inspired by bible stories. Accompanying a story with a strong visual to color will help children remember lessons taught by parents or sunday school teachers.

Imagine your children not only learning about Noah and the Ark but being able to color Noah as he reviews a blue print while the Ark is being built. Watch your son or daughter learn about the rescue of Daniel as they color him being lifted from a den of hungry lions by a rope.

K. Jones is an illustrator that enjoys creating picture and coloring books for children.