A Place for Ferns and Mushrooms 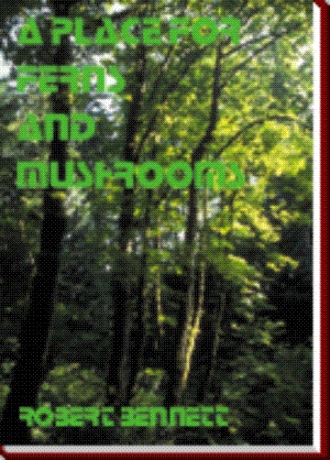 occasional shadows across the race ravaged buildings, keeping it bearable.

I unfastened a snap on my shirt, but I was uncomfortable more because of

surveillance started, in a cold fog near a construction site in Richmond.

shadow, and just in from the fringes, he passed virtually unnoticed.

Passing under the 980 overpass, I drew the measured stare of six teenaged boys

drinking from a communal paper bag, and gripped the butt of the little 38

Chiefs Special under my shirt for assurance.

The hostility here was suffocating. My quarry walked more like a linebacker

than a woman, and stopped to leer at some adolescent girls driven to sell

their bodies to passing motorists.

The distance between us shrank when he stopped, so I lingered to gaze in an

old store front, hoping to look preoccupied, but it offered only pieces of

broken plaster on a bare slab floor, along with a few loose nails and

through a crack in the window to a hole in the floor, a hole that once drained

a toilet, while dusty remnants of the windows reflected streams of traffic on

In an instant, the doorway filled with an enormous object. At first I thought

maybe they were moving a freezer.

'That must be the madam,' Fuzzy said.  He and Russ were sharing the rifle

'You gotta' see this,' Gabby moved to one side so I could use the

A most enormous woman was emerging through the door of the mobile, wriggling

to get out, like a larva.  She was dressed in a shade of yellow that matched

A short waisted top hung from the ends of her huge breasts like drapes.  Her

matching skirt, which started just under her breasts, stopped about the middle

of her thighs, exposing garters that could only pull her nylons to her

Two girls held her shapeless arms, and slowly passed her to the others on the

ground.  She'd step down with her right foot, then bring both feet together on

the same step, before proceeding to the next one.  There were four steps, and

upon reaching the ground, she stopped to catch her breath, spreading her legs

When the gasping slowed, she started for the main building in a manner of

locomotion that was both faltering and constant at the same time.

Four girls stayed around her, keeping their hands on her, guiding her towards

He had moxey, though, Struggling to his feet, he ran around the end of the bar

and started for Gabby.  I reached out with the wire cutters and nipped a piece

of a love-handle as he went by.

He swatted at the nippers, like you'd swat a biting horse fly, turning a

little in the process, so by the time he got to Gabby, he was running a little

The old wrestler was so completely spent by that time, that Gabby just stepped

aside and stuck a foot out.

The airborne bar tender, now finding himself sailing towards the restrooms,

tried to turn in mid-flight, realizing he'd hopelessly missed his target, and

with the look of a man who'd just remembered something important, lost his

momentum and hit the floor with a loud splat.

He just laid there after that, on his back, in a puddle of blood from greasy's

Ali Baba stood by the door, waiting for his chance.  The bored guard by the

west door, looking a little bothered now, put down his magazine and stood

I held my gun on Ali Baba while Gabby concentrated on the others.  'Move over

by the cashier,' I told Ali.

I shot a hole in the floor between his legs.

The buxom belly dancer and the other girls ran out through the hallway door,

I put Annie down and told her to walk outside.  She obeyed,

'A Place for Ferns and Mushrooms' is a mystery/detective novel, narrated by a quasi-legal investigator. The story is designed to convey the lore of tales grown and nurtured in the north woods. Although projected through the metropolitan framework of the San Francisco Bay Area, the story is more narrowly trained on the nuances and background of rural Oregon.

Nibbling around the edges of that current American apprehension so recently spawned by multiculturalism, the book's focus is on the unmitigated fear of it all, working on the premise that the militia movement is not so very distantly removed from the recent boom in country and western music, celebrities buying large ranches in Montana, and a growing interest in folk art.

The pending collapse of linguistic, ethnic and national borders, has forced people, with no reason to have previously questioned, to seek their cultural and ethnic heritage, a search often prompted by a sense of having misplaced something, or a need to define personal identity.

An unanticipated result of reaching for those expatriated Americans, is a subsequent connection to that fringe intellectual segment of American culture, who look fondly back on the 1960s and who once read J.R.R. Tolkien, but have sadly acquired too much knowledge to any longer connect with Bilbo Baggins, and who sometimes reminisce across the wistful background of bluegrass music without projecting that neither the music nor this book could have developed anywhere else in time or place.

This collective American identity crisis, personified by baby boomers raised on Dr. Spock and always urged to find themselves, has not been reflected in popular literature, except perhaps for a revised interest in nostalgic periodicals, such as The Western Horseman and Boots and Saddle, until now.

A strong sense of cultural identity, along with a warm feeling of camaraderie, is advanced throughout this narrative, which is woven together through a story line of a mystery laced with understated humor.

'A Place for Ferns and Mushrooms' is a book designed to contrast relationships; relationships between urban and rural, past and present, hard/cold and warm/fuzzy, while accentuating the contrast between high-tech-international and home-spun-real.

Born and raised in Grants Pass, Oregon, about the time the GI Bill tripled the price of Douglas Fir stumpage, I began to work on farms and dairies as soon as I was old enough.

I started operating heavy equipment by the age of 15, mostly in the woods, under the legal age to work. The loggers, short of help and wanting to make a lasting impression, dropped me off on my first day with instructions: 'Take that old motor grader, kid, and blade the snow off the road between here and camp six. The crummy will pick you up at the other end on its way out.'

They left, then backed up and a hickory-clad arm stretched out the window with a red grease rag wired to a rock. 'Here kid,' the arm's owner mumbled, 'if you lose 'er over the edge, throw this out so we'll know where to look for the grader.' It took me an hour and a half to figure out how to start it.

I went to Oregon State to become an engineer after that, then went immediately to Riverside California to experience the auto racing scene. With no money to participate in auto racing, I went back to Oregon. There, I went to Southern Oregon University and emerged with a Bachelor's degree and a teaching credential.

After returning to logging for a while, I tried the paving and construction businesses before enrolling at California State University, Sacramento, to learn how to write a book. I earned a Master's degree and have since written several short stories and three novels, including 'A Place for Ferns and Mushrooms'