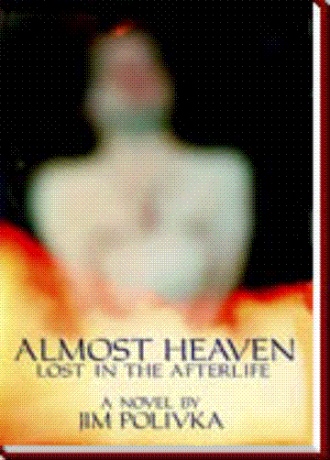 They did not move, yet she heard him nonetheless, and now that attention was called to it, this time she actually noticed the strange, effortless way they had been communicating, but quickly rejected it with old, reflex logic, refusing to believe that such an act was possible, except through some kind of hypnotism or magical trick.

'You can't be serious,' she nervously chuckled, trying to dissuade herself by laughing it off. 'And I suppose this is some kind of afterlife. Another dimension. Maybe the Twilight Zone?'

'I'm perfectly serious,' he said, directly facing her, his expression painfully gaunt. 'It's the only answer, Beth.'

She became scared, but channeled her fear into stern deliberation. 'That is the most absurd thing I ever heard. When something dies, it dies. It ceases to exist. It can't go on living. That's just a myth, to comfort people afraid of their own mortality. There is no afterlife, Danny.'

'Why couldn't there be? Maybe it's all true, Beth. Maybe life really does continue after we die. Anything is possible.'

'No. Not that. Some things are not possible,' she said, her fear slowly rising into angry denial. 'I don't believe it. I won't believe it, and I resent you even talking to me about it any more! The fact is that we just got thrown from the plane and knocked unconscious. That's all.'

'What plane? Where did it go? And what about us? I feel perfectly normal, and neither of us has the slightest scratch or burn. How could we have survived a disaster like that without even so much as a cut or a bruise? And what about our identical memories of going through the tunnel, and the Valley?'

'You must have a concussion or something, because you're not able to think clearly,' she curtly replied, with doubt and panic beginning to set in.

'I'm thinking more clearly now than I ever have, and so are you. We have nearly instantaneous communication, Beth. Admit it. We're experiencing it right now! I'm telling you something without speaking, because I really don't have a mouth to speak with anymore! It probably got burned up with the rest of our flesh and blood and bones back at the airport! We are nothing more than bundles of electrical energy. We just mentally convey our own images to each other because that's all we know from our lives. It's to guide us, that's all, so we can tell each other apart, but we have no physical substance anymore. It's why we can travel instantly, too. I've done it with the priest, and you've done it, too, when you saw me lost in the Valley.'

'But it does make sense!' he shouted. That's what makes it so incredible! Don't you see? Just think about it a minute, Beth. What we experienced matches all the reports of people who had near-death experiences. The tunnel, the flashbacks . . .'

'Chemical reactions of the brain responding to severe trauma . . . '

'Yes, maybe at first, but it's more than that! It has to be. You and I saw each other, for Christ's sake! That was no freak chemical response! It even matches the Bible, Beth. That Valley. Now, I'm not at all religious, and certainly no Biblical scholar, but I do know there's a famous passage that they usually recite at funerals. How does it go again?'

He thought a moment, and then recited: 'Though I walk through the valley of the shadow of death, I shall fear no evil . . .'

'No! Stop!' she cried out with a blood-curdling scream, covering her ears with her hands, unable to accept what she was realizing to be the horrible truth. 'We're alive! Not dead! Why won't you accept that? We're alive, because we can see and hear and feel! We're not dead! We're anything but dead! Can't you understand? We're here and we're alive!'

'But not alive in the same sense as we were before!' he shouted back, grabbing her by the shoulders and addressing her face to face. 'Listen to me, Beth. Something's happened. I don't understand how or why, but it's pretty obvious that something very strange has happened to the both of us. Something either horrible or wonderful, but something extraordinary. Something supernatural.'

'No. I refuse to believe that we've died! I can't explain what happened either, but there has to be a logical explanation.'

'There is a logical explanation. It's death. Or 'rebirth' might be more accurate. No matter what we call it, you still have to face reality, Beth! Everything's changed. We're in a new world. Just look around. And we've changed. I've traveled here from the Valley with powers I never had before. Abilities I never dreamed possible.'

'You have to,' he calmly stated. 'It's the only explanation, and the sooner we accept the truth the better our chances are of figuring out what we have to do next.'

He sat on the ground, with legs folded, and gazed at the ground. Beth paused for a long moment, then succumbed to the fear and helpless sense of loss that she had tried so hard to resist. She felt incredibly lightheaded and weak, as a terrible chill shuddered throughout her entire being, leaving her quietly shaking, just as Danny had been earlier.

'All right, something's happened,' she quietly admitted. 'I don't care what the reasons are behind it! I don't even want to know. All I do know is that I'm scared and sick and want to get out of here!'

She began to weep, with tears, real or merely a mental projection

Almost Heaven - Lost in the Afterlife is a thrilling, mind-bending, fantastic excursion into the world beyond, shattering universal mysteries common to all humanity since the beginning of time such as life and death, love and hate, good and evil.

Danny Stiles, haunted by severe depression and suicidal intentions, accidentally dies before his time and is sent on an incredible journey into the wonderful, mysterious, but also horrifying afterlife. There he strives to defy fate and return to the loving wife and child he abandoned, confronting along the way his own personal demons while falling in love with another lost soul.

Almost Heaven - Lost in the Afterlife will take your breath away, chill your spine, and warm your heart. ?? 2 Jim Polivka

Jim Polivka has written for radio, television, stage and screen, with most of his work in a more comedic vain than Almost Heaven - Lost in the Afterlife, his fist novel. An actor as well as a playwright, he appeared in the Los Angeles premiere productions of his one-act plays Benchwarmers and Closing Arguments and the show-biz spoof Hollywood and Wino, which he co-wrote. Jim has also penned several screenplays, including an adaptation of Almost Heaven - Lost in the Afterlife. He was born and raised in Pennsylvania, is an alumnus of Penn State University, and lives in Southern California with his wife Pam. ?? 2 Jim Polivka