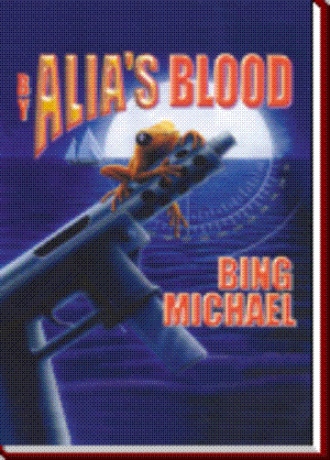 Vivariums, several in number, dripped condensation into their miniature rainforests. Ultraviolet light cast an eerie glow into the dark room and was reflected on the glass wall opposite. Beyond, South Florida's’ lights stretched north to the horizon.

Biscayne Harbor, twenty-sixth floor penthouse. The Harbor, home to the reclusive wealthy, didn’t ask questions and didn’t have a memory. The occupants had lives somewhere else. Here they had sanctuary, anonymity. So it was with Katarina Calderon, who’d lived here for fifteen years, alone.

The statuesque brunette moved with practiced grace through the darkness of the penthouse’s huge living room towards the bank of fifty-five gallon tanks lining an inside wall. She carried a cardboard box which she placed on a table to the left of the tanks. She removed from these boxes several smaller metal containers containing live ants.

The ants, natural diet of the amphibian denizens of her artificial jungle, flew into the United States that morning with a shipment of drugs from Columbia. Bright black eyes peered expectantly through the mist shrouded glass at the activity beyond.

"Ah my beauties," she whispered as she carefully opened and reached inside the first tank, releasing the ants, watching them scurry across the wet vegetation. Then to the other tanks, one container at a time for the tanks five tiny residents. Katarina was careful to avoid any contact with her pale yellow beauties...Phyllobates terribilis, the poison dart frog.

Each frog though small, less than two inches, was deadly. Its skin is capable of secreting as much as 200 micrograms of the most potent animal poison known. Two micrograms will kill an adult human.

She released the last of the ants, completing the weekly feeding ritual and returned to the table. From the cardboard box she took a pair of elbow length rubber gloves and what appeared to be a rolled piece of leather some foot and a half long.

In the end, the Miami paper would nail it in their editorial. "This thing was about Alia, all about her, and her swim that fateful night."

The story began 28 years ago with a reporter stationed at a Coral Gables hospital located hard by Biscayne Bay. It concerned the mysterious death of a pregnant Honduran female and a deadly curse they say followed her from the Bay Islands. Alia, descendant of a 17th-century pirate and a woman taken from a captured slaver, was island nobility but chose to flee her family and an arranged marriage to be with the man she loved.

Her daughter lived. Rumor had it that it was predestined the newborn would carry the curse, pass it to her surviving firstborn female offspring, then die. So it would travel, daughter to daughter, down through the generations until the bloodline was broken.

The attending doctor filled in the required blanks of the death certificate and moved on, duty complete, official cause of death listed as cardiac arrest. Then, as is often the case in legends of cursed bloodlines, the tale sank into the tapestry of local lore.

Now, after years of silence, it surfaces, exploding into the public consciousness. Serena, woman child of Alia, must now face her mother's legacy--and break the curse or die.

Bing Michael grew up in Miami, Florida. Always around the sea, he spent his early summers as a deckhand on harbor and sea tugs, gaining a healthy respect for a sailor's twin demons: danger and boredom. The spirit of these formative years spent docking ships, towing barges filled with highly flammable and explosive liquids, and working alongside a colorful cast of characters provides the foundation for his writing. Home for this licensed captain is Charlotte, North Carolina. He can be reached by e-mail at: bingcmichael@yahoo.com