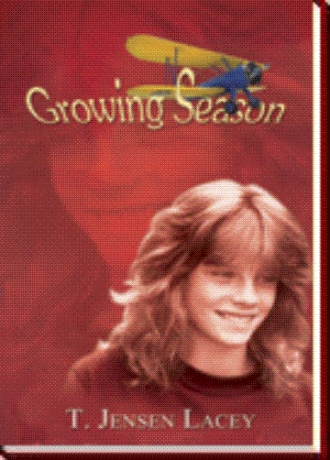 I didn't hear Alex's last words, because behind me a loud and gravelly voice boomed, "Hey! What are you kids doin' around my planes!"

I jumped up from the back of the plane so fast I almost fell over. Jerking Alex's sleeve, he looked up and saw the person we most feared: Mad Jack!

I grabbed Alex: "Let's go!" I yelled, forgetting that sound was unnecessary.

"Hey, you kids!" Dressed in an old faded blue jumpsuit, Mad Jack chased us around the plane, but we were too quick for him. We ran from the back to the front, and were off, feet flying, down the landing strip. I felt like I could take off, I was going so fast!

But someone on the airstrip in a yellow station wagon had seen us and started to head right towards us. Alex and I jumped over to the side of the strip, landing in some blackberry bushes just off the runway.

The car came to a halt next to us, as we began trying to get loose from the briars. I heard a car door slam and looked up.

A woman approached us from the car. Like Mad Jack, she, too, had on a jumpsuit, the kind pilots wear. She wore a bill cap that said "Jack's Flying Service" covered in fishing paraphernalia, and wore turquoise earrings, cat's-eye sunglasses and boots.

"Who are you?" I said wonderingly.

"Never mind who I am," she said, seriously but not unkindly. "Who are you two?"

Mad Jack appeared behind her. "What were you two young 'uns doing around my planes!" he demanded. He glared at us; his fierce black eyes shone against the white-hot summer sky. His weather-beaten, grizzled face and broad cheekbones made him look even more menacing, and the pitchfork in his right hand didn't reassure me that he meant us no harm.

Thirteen-year-old Kati is sent to her godparent's house for the summer, while her parents decide if their marriage is worth saving. Unhappy over the prospect of being the child of a broken home, Kati is at first a reluctant guest of Alfred and Rachel Bean, deep in the Alabama countryside on the shores of Cove Lake.

As Kati struggles for happiness and self-acceptance, she finds mystery, drama, and adventure – even a little romance.

Her adventures begin the day she arrives, when she helps Alfred, a veterinarian, with a canine Caesarian section. She befriends Alex Parker, deaf from a skiing accident, whose mother, Cynthia, is overprotective as well as lonely.

Her summer gets more complicated when she meets a half-Comanche agriculture pilot, "Mad Jack," who enlists her help in renovating a World War II-era Stearman bi-plane. Then she finds herself falling for who she thinks is "the perfect guy," the charming Skip Emmett.

Kati takes on the role of mediator with Cynthia and Alex, and discovers she can make a difference somewhere in the world. Ultimately, she comes to terms with herself, her parents, her new and often confusing feelings for the opposite sex, and her newfound love of flying – in what is suddenly a too-brief summer.

Her writing experience has been with six newspapers and several magazines, among them the award-winning magazine, VANDERBILT. She has published over 500 articles on a variety of topics, and is a contributor to the best-selling CHICKEN SOUP FOR THE SOUL book series.

Being of Native American descent, Lacey has studied and written about Native American history and culture, resulting in the publication of two books, THE BLACKFEET (1995) and THE PAWNEE (1996, both by Chelsea House, New York). Her previous book, AMAZING TENNESSEE, was released in 2000. Her story, GROWING SEASON, is her first multi-cultural Young Adult novel.

Lacey resides in Clarksville, Tennessee, just outside Nashville. She enjoys being outdoors, giving writers' workshops, doing book signings, and speaking to groups on a variety of topics.