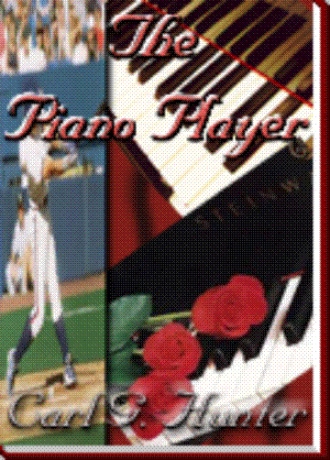 In the delivery room, three nurses stood looking down at a very small baby boy who had been born only a few minutes earlier.

'That's a small kid but he sure has big hands,' one of the nurses remarked with a chuckle.

'Maybe he'll be a basketball player,' added one of the other nurses. 'Someday he ought to be able to hold a basketball in one hand.'

'He's too small to be a basketball player,' said the third nurse. 'How about a baseball player?'

'I think he's too small for that, too,' said the first nurse. 'I predict he'll be a piano player. He ought to be able to reach across an octave and a half when he's grown.'

All three smiled behind their masks and nodded.

When all the young people had performed, Miss Judy asked if anyone else would like to play. After a moment, Maynard stood up. He wondered if he surprised her. He'd never know for sure and would never ask. She might have heard some of her pupils ask him if he was going to play at the recital. She sat back down as if nothing unusual had occurred. It was what he expected of her. She would accept whatever he chose to do.

He reached under his chair and brought out a cassette player. As he did, he tried to look at her with that same sly glance she had shown him years ago. After this, he suspected she knew every move he was going to make. She was still the teacher. You can't fool teachers.

He set the cassette player on top of the piano. He started the tape. It was set to play very softly an orchestral arrangement of the aria of Puccini's he'd never been able to play before. He'd only been able to practice it the last few days. As he played the soft, flowing melody that brought so much of his past to flow through his memory, it seemed the whole room, the people, and the outside world were at rest. He marveled at how easily the song played itself for him. It was as he were two people and one of him was watching the other play.

When he'd finished, he sat very quietly for a moment. No one applauded. Something in the song was too deep for applause. It created too much of a spell to be easily broken. He slowly looked toward his teacher. She had a faint but very peaceful smile on her face. He looked into her eyes and nodded his head very slightly three times. She looked at him without blinking and nodded just once, a movement so imperceptible no one else in the room could have noticed it.

Maynard felt a hand on his shoulder. It was Jeffrey. He took hold of Maynard's sleeve and escorted him back to his seat.

As Maynard sat there, Jeffrey remained seated beside him. People stood up and began to move about. Miss Judy was still sitting in her chair at the front of the room and was looking toward them.

Maynard's vision lifted, out of the room, above the building, and he was seeing a distant horizon from above the earth. As he expected, Katherine's face slowly materialized and came into focus across his mind. Her eyes glistened and her smile filled him with love and contentment.

Three nurses look down at a newborn baby boy. They notice his unusually large hands and try to decide what his future might be. One predicts he will be a basketball player, one a baseball player and the third a piano player. It turns out he does all three and excels in several other sports but the piano becomes his lifelong career.
He begins all these activities at a very young age and learns to play the piano at his mother's side. He works with his gifted and beloved teacher throughout his school years and into his retirement years. While in college he plays in concerts and works with other music students and professors. He meets a dark-haired girl who plays the piano. He and Katherine fall in love but are forever separated when her family moves to a northern state where her father becomes a governor's aid. He thinks of her constantly throughout his life.

Although Maynard Wallace is not a large young man, he is strong and quick. He receives honorable mention on the All-American track team. His coach tells him he has a chance to make the U.S. Olympic team. After much thought he decides against going for this because it would mean giving up his other sports and his music. He plays minor league baseball for several years but is not called up to play in the majors.

Maynard tires of sports and concentrates his efforts on a career in music. He is very talented and a hard worker. With the assistance of his teacher who is a well-known regional pianist and singer he eventually becomes one of the top concert pianists in the nation.

His travels and concert appearances provide a very interesting and varied lifestyle. He plays in the most famous concert halls. He plays regularly in a large bar and restaurant in his home state. He plays in a large restaurant in Texas where he meets a young girl who does the 'girl-on-a-swing' act. They become close friends. When he learns she is a very talented ballerina he works with his teacher and the symphony conductors they know to launch her on her career in ballet. He finally realizes this is the most satisfying thing he has ever done.

Late in life he knows that teaching others and helping them with their careers is the most fulfilling. After her suggestions and invitation he joins with his lifelong instructor and friend to teach in his own hometown. He sees Katherine's face again in his mind and is filled with love and contentment.

Carl Hunter was exposed to several years of piano lessons as a youngster, but reports they 'didn't take.' After a number of years of playing the baritone horn in school bands, he concentrated on singing. He sang in glee clubs during school years, then as a church soloist, and finally he performed operatic arias with a professional opera group in the 1960's and 1970's.

He was active in a number of sports including tennis, track, golf and baseball and played for high school and college teams.

He has written over a dozen technical and semi-technical books and papers on conservation and wildlife management. Three full-color field guides on wildflowers, trees and autumn leaves are regional best-sellers and have earned a number of citations and awards. He has written many magazine and newspaper articles. His first novel, This Cup, was published in 1998. It required ten years of research and study. It is a story of the outdoors and a fresh and factual look at the King Arthur legends. Mr. Hunter resides near Alexander and Little Rock, Arkansas.