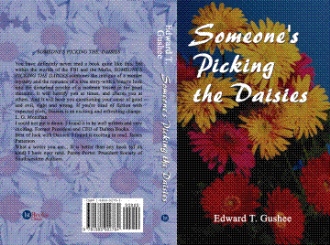 There was a sound, the slightest noise, and it came from the door to the gym. Steve reacted instinctively and pulled Janice behind him, shielding her from the direction of the door. At that moment he felt a sharp pain in his right shoulder and a muffled 'phewt' shattered the quiet of the room.

Warm blood trickled down his right arm. Steve knew instantly he'd been shot. He tried to free the Baretta from his leg holster, but his arm was in so much pain he coudn't do so.

Steve knew he must get Janice to safety, but the door to the gym was out of the question. That's where the killer was. The only thing he could do was hide until he could free his weapon. He grabbed Janice with his right hand and despite the pain, pulled her along with him. With his left hand, he threw the chair she'd been sitting on to the right side.

Another muffled 'phewt'. But this time there was the stentorian sound of the bullet smashing into a wall.

Steve pulled an unmoving Janice up the stairs to the balcony where he pushed her to the floor between benches. He then placed his body on top of hers to protect her.

Janice began to see ghost pictures again. But now they were clear. Now she could make out faces and features. She saw her bedroom and the man that was now lying on top of her was Bob Harter and she was being raped. The nightmare had returned.

'Janice, forgive me,' he said, and removing his hand from her mouth, he hit her as hard as he could. The last word she screamed was, 'Bastard' and then she slumped quietly to the floor.

SOMEONE'S PICKING THE DAISIES is a novel that strikes a tantalizing balance between love and hate, tenderness and violence, passion and insensitivity, revenge and forgiveness.

It's a love story punctuated by knives and bullets, suspense and intrigue and accented by the FBI, a Grand Jury, the Witnesss Protection Program, a brilliant but disenchanted young man and an agent sworn to protect a beautiful eighteen year old girl.

It's a novel that challenges the reader's emotions: Can one feel sorry for a man who has brutally raped and shot a young girl, murdered her parents among others and disemboweled the bride of an FBI agent?

It's a story that challenges credibility. Would a reader ever believe that that same man, at great risk to himself, could thrice save the life of a girl whom he twice tried to kill?

Can a tender love story exist within these violent trappings?

All these things are possible in a fast paced novel that's virtually impossible to put down.

Edward T. Gushée (Ted) graduated from Williams College where he majored in English and minored in theater. He co-starred in several college productions with theater-mates John Fankenheimer (Hollywood director) and Stephen Sondheim (Broadway lyricist and composer). He acted in summer stock theater in Cape Cod.

In 1951, Ted enlisted in the Air Force, piloted twenty-five B-29 combat missions over Korea and was awarded the Air Medal. Upon discharge, he spent time in Hollywood under the stage name Richard Lowe. A year later, he thought it might be time to start eating again so he joined J. Walter Thompson Advertising agency in Detroit.

From 1971-1974, Ted supervised the European Ford car business for Thompson while living in London England with his family. While there, Ted opened a restaurant with a friend and within six months the restaurant was commended in Gourmet Magazine.

In 1988 he was appointed COO and a general manager of the Detroit office. Throughout his career, Ted was never far from a typewriter. In 1993 he retired to work on his writing (he has written three novels), his golf, his tennis and his bridge. He's a member of several wine societies, has a 'modest' wine cellar, and also enjoys cooking. He is married and has one son and one daughter.