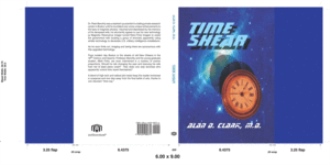 Benchly turned around in the Scanner stretcher and looked at what should have been the floor of the scanner. Instead of mother earth beneath his feet, he was hovering high over the Mississippi river in the late Eighteenth century.

'Mark! Don't hit that key yet. I'm high over water!' His voice began to falter with the rush of adrenalin in his head. 'Wait, let me move the fiberoptics.' Benchly twisted the camera so Mark could at least view the surroundings. The little snake-like tube seemed to disappear into nothingness. The nothingness of the future - at the Institute - hundreds of years and half a continent away.

Now with visual contact, Mark moved the coordinates, giving Benchly the sensation of flying above a group of cypress trees north of the city. Slowly, the foggy marsh greeted him.

He felt a sudden surge of energy at his feet. Along with that energy, he also felt - what?

Gravity! Interesting, he thought, as soon as the end of the scanner was released, he was now under the influence of the Intersect's gravitational pull, depending on relationship of the Scanner port to the horizon. His body was now horizontal to the Intersect's landscape. Freedom!

Benchly was beginning to feel cramped as he moved forward in the scanner, his feet carefully touching the ground beneath him. His boots made a squishing noise as they sank into Mississippi swamp mud. A giant step for mankind, he thought, backward.

The swamp was fog bound. He could barely make out the form of rows of cypress trees and water between them. Dotted islands of mud were intermingled, one of which now was supporting Benchly's weight. He could still sense the scanner behind him. Mark had orders to move the Intersect over the city 60 seconds after landing.

Dr. Peter Benchly was a washed-up scientist in a failing private research center in Boston until he stumbled over some unique enhancements to the laws of magnetic physics. Haunted and depressed by the memory of his deceased wife, he reluctantly agrees to use his new technology (a Magnetic Resonance Imager turned Retro-Time Imager) to aid the government. He assists by locating a group of terrorists apparently using similar technology to devastate U.S. military intelligence installations.

As he soon finds out, imaging and being there are synonymous with this upgraded technology.

From modern day Boston to the streets of old New Orleans in the 18th Century and beyond, Professor Benchly and his young graduate student, Mark Potts, are soon intertwined in a mystery of cosmic proportions. Should he risk changing the past and rescuing his wife from her ill fated plane crash? How does one stop terrorists who apparently control time travel themselves?

A blend of high tech and radical plot twists keep the reader immersed in suspense and one step away from the final battle of wits, thanks to one reluctant 'time-cop.'

Dr. Alan Clark is a veteran of the 'ER' since 1976. Presently practicing at a high volume trauma center in the Midwest, Dr. Clark is currently assisting as an associate editor for a national forensic science review. He served as an assistant professor of surgery at the Medical College of Georgia in 1988 and 1989.

Dr. Clark wrote Time Shear between 1987 and 1989 after an idea about combining time travel technology with present day news events. Since the book was written, many similar themes emerged in the media, such as Quantum Leap and Time Cop, all with a similar flavor and integrated style.

Other works by Dr. Clark include 'Wish Christmas,' a favorite story and song that has been made available to view and enjoy through his Internet site (ERWorld.com).