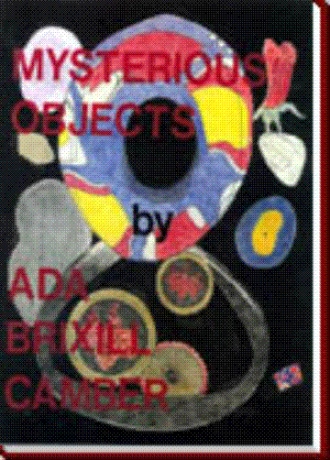 The battered metal trunk aforementioned could also be an illegal alien, brought into the country several hundred years ago and kept among the Indians (or Eskimoes). Their teepees, pottery and fabric designs were extremely geometrically precise for such an apparently primitive savage people. In fact, given the mermaid geometry, the Indian designs, and the account in the Arabian Nights, during the reign of Harun al-Rashid (770-810 AD), of a murdered woman's remains found in a metal chest, the chest could date as far back as the reign of Pharaoh Tutankhamun. According to the story 'The Three Apples' from 'Arabian Miniatures: The Most Beautiful Nights' Shahrazad relates to her king Shahryar how an old fisherman accidently found a heavy padlocked chest in the Tigris River. Upon opening, officials unwrap a fair young woman murdered and divided into nineteen pieces. Several men came forward to discuss or confess to, the crime, including a blackamoor slave, another old man and the slain woman's husband. In the end, the solution to the crime had given every-one, especially Caliph Al-Rashid, a hearty laugh (Arabian Miniatures: The Most Beautiful Nights 1968, 3-10).

According to many pictorial sources, the funerary mask of Pharaoh Tutankhamun was remarkably similar in coloration (blues and ochres) to the iron box. It could have been buried with someone's remains, robbed and sold full of stolen tomb plunder, and hidden among the itinerant or the junk collectors or dealers. Hence it found its way into our humble abode on Massachusetts Avenue circa 1955.

My mother, from whom I borrowed it, came up from the South around 1940, with a beautiful set of Samson luggage. She was probably unemployed for awhile and susceptible to antique items and cheap second-hand furniture. I know she had it when I lived with her since I was about ten years old. She used to keep an aqua plastic sheet at its bottom and miscellaneous odds and ends in it. It was kept in the closet while we were on Mass. Avenue, then when she moved to Cambridge it was stored out on the enclosed back porch. I never paid it that much attention, taking everything for granted--even an oddly dirty-looking old iron trunk in an otherwise spic and span clean apartment. She concomitantly used to be a cleaning woman on the side while waitressing at Harvard Business School's Kresge Dining Hall.

I telephoned her former roommate who had moved back to South Carolina, a few years ago to inquire if she remembered the chest or knew where it was purchased. But after a few moments conversation, we were 'disconnected' and I decided not to call her back.

Why would anyone bring or smuggle a dusty old chest of mottled paint into this country? If it came here by way of Iraq was it being used for international exhortion or bacteriological germ warfare? Was it part of a voodoo or cabalistic spy ring? Why hadn't it been cleaned all those years? Did it date from the time of the lepers? Why was it the same colors as Tut's mask?

Incidentally, one of my favorite childhood stories from my mother's bookcase loaded with expensive books is entitled 'She' or 'Adventures In the Caves of Kor.' In it is described a mysterious iron chest of unknown but decidedly ancient age and origin (Haggard 1981, 16-17, 21, 24, 29).

There is another incident in which the metal trunk played a major role. For several years I had been adding to my collection of grocery and household items for the EPA. I even brought five new heavy galvanized metal trashcans for additional storage. Before that, I had been putting the empties in bags, boxes, and even the iron chest. Among other things I had kept an emptied can of Welch's frozen grape juice in it for five or six weeks, with a plastic top cover over the two openings for pouring. During the summer of 1983 while preparing to put the recyclables out for collection, I removed the can and brought it over to the sink to rinse out again. According to my notes, on July 11 I called my mother to ask her if it was okay to throw the chest away; she said she did not care what I did with it. I think it was about this time that I was over her house watching color television, and I chanced to see 'Star Blazers' on channel 25, in which they were foiling an attempt by aliens to invade the Earth. There were several episodes to this story, but but this was the first time I had seen it in color, and the colors reminded me of the metal trunk at home.

It was an odd thing--was it made from scrap metal of a larger machine or ship? So when I got home the next morning I decided to clean it out and get it out of the apartment until I could discover what it was. Also on that Friday, I wrote that I was sleepless, had tied the chest to my doorknob outside in the hall, it was outside when I was in, and inside when I was out. It was also about this time that I consulted with the management to see if they had a storage space downstairs in the basement where I could keep it awhile. They did. Kathy Beredith graciously helped me to carry it down. ??

Based on real-life events, this book is about twelve extraordinary objects-deadly enough to put this author in the hospital, powerful enough to cause a hurricane. Will they overwhelm us or will we be able to escape from their clutches intact? Read and see for yourself. Illustrated with 28 pages of documentary drawings and photographs.

Ada Brixill Camber was born in 1944 in Boston, Massachusetts. She has gone several name changes, from Barbara Lloyd, Taura Smythe, to Khalida Sharif. She spent a month in France in 1969 during which she acquired several of the items mentioned in her book. She received a certificate in Library Science at the University of Massachusetts in 1972, and later graduated on the Dean's list with a degree in Psychology from the same school in 1992. Ms Camber has also attended Jamaica Plain High School (1962), Mass. Bay Community Collage (1964), Women's Technical Institute (1988) and Computer Processing Institute (1998).

Ms. Camber was brought up in the Gloucester Memorial Presbyterian Church but she had a strange and unhappy childhood due to the fact that she grew up with what she later discovered was an item involved in a vicious murder circa 800 AD. She had one child, Eric, later Simba Amir Sharif, who died in a drowning accident in 1995. She has served as Secretary in the Parents Steering Committee at Highland Park Free School, her son's elementary school in Roxbury from 1971 to 1974. She was also confirmed in 1997 as a member of Trinity Church in Copley Square. She is now serving as Co-Clerk in the Piano Craft Guild Tenants' Association Board of Directors in the 1853 Chickering Piano Manufactory building where she is currently living in Boston. This is Ms. Camber's first book.