A Whale of a Tale:

Come as a Breath of Fresh Air 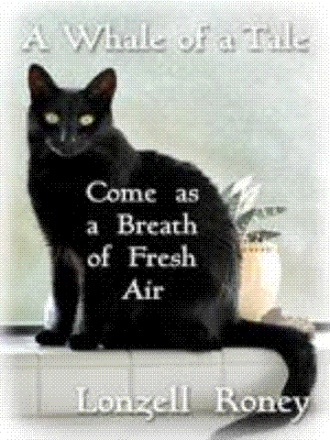 Scooter was born a real smart cat. His parents gave him alot of love right from the start. One day Scooter was on his way to school and he was late, As he was walking he saw something he liked. It was a nice bike. Everyday and every night, Scooter asked for his new bike. Scooter would pray, 'I'll take a shower, I'll brush my teeth, I'll comb my hair: Oh please let the bike be there.'

And then one day there it was! Scooter's bike sitting on the porch.

But before they could finish, Scooter was out of the door, on the porch, down the street. Scooter rode and rode, waving to everyone, and shouting, 'Look at my bike.' You could hear Scooter everyday.

As Scooter rode down a new street waving at people, someone would yell out 'hey check that cat out on the bike. Say man you want some weed, how about some crack?, what about some speed it will make you go faster? Scooter said 'No, I'll pass, my bike goes pretty fast.'

This will make you paddle much faster. Again he said 'No I got to go.'

This girl said I'll give you what you like if you let me ride your bike, As he started taking off someone said 'Where can I get an outfit?' Scooter said 'at K-Mart.' They laughed, he is not talking about clothes, he is talking about needles. Scooter took off, feeling great as the wind blew back his hair. Scooter started coming home late at night. He didn't have time to eat, sleep, or even speak. He didn't even change his clothes, he slept ready to roll. Sometimes he slept in his class, other times he would not even go to class. His parents asked one another 'What time did he come in last night?'. Hmm!, something is not right, all he thinks about is that bike.

Scooter became ill from riding in the night chill. Scooter's father Jo-Jo came in to see him. He started reading from the bible and praying for him. Scooter who didn't understand his father being the type of cat he was -- full of understanding called Scooter's older brother 'B.J'. B.J. loved his family very much that he went over without thinking about it much. His father met him at the door. 'Dad you look very tired'. said B.J. His father replied 'I am never tired when it comes to my children, B.J. Scooter is the only one you should worry about.'

A Whale of a Tale is the story about a cool cat named Scooter who, like most kids, is more interested in new bicycles and playing with friends than in taking care of his responsibilities around the house or in school. Yet Scooter is lucky in one sense. He has loving parents who are trying to teach him the right thing to do. Children and parents alike will delight in the adventures of Scooter and the lessons learned.

Lonzell Roney was born in San Bernardino, CA, and considers himself a student of this great world who enjoys life while deeply believing in humanity. He currently works as a maintenance engineer, and is the proud father of a daughter, Sarah, and a son, Shawn.