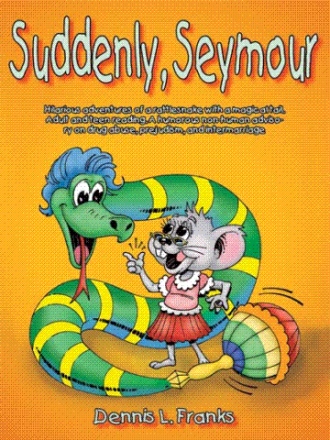 'Which way'd he go? Seymour wondered. Raising his horn rimmed glasses and pompadour hat to just above the grass tops, he watched as the boy disappeared into the farm house.

'Whew-w-w. That was a close one,' he thought. 'He looked like a kid about five years old but he sure had some big feet on him'. Again, he peeped over the tops of the grass shoots, squinting into the morning sunlight. 'I rattled him pretty good though. Hsss-ss-ss'! He smiled to himself as he proudly stroked the smooth edges of the rattles at the end of his long tail.

Ah-h-h, I think I can relax a bit now, at least for a few more minutes. A snake's life is a charmed life, that's for sure. I saw a movie last week about a snake in a basket that could dance to flute music. Heck, I bet I could do that. It'd be easy stuff. I bet I could . . . Uh, oh. I hear human voices. Id better see what's going on out there'.

Raising his head once more above the grass level, he squinted in the direction the voices seemed to be coming from. ‘Yup, there he is again. That little muffin faced kid with the big feet. Wonder who he's talking with... can't quite make him out... Oh, NO! Not the farmer! He's the one guy I've been warned to be careful of. Oh, gheez, not that ! It looks like he has a shovel in his hand. Yup, for sure, it's time for me to snake out of here before it's too late. Yikes! Now, theyre running this way. Sure hope they dont see me'.

'Well, I'm sure it must be painful for you, dear, but, really, I dont know what I can do for you'. His mother sympathized. 'Did you use your fangs like you've been told'?

'Heck, no, Mom,' he wailed. You said I had to brush them before I could eat'.

'Well, you'd better get back up there and see what's going on. If you can get your rattler back, we'll call the plastic surgeon and see about getting it put back on for you. Ooze along with you now, dear'.

Quickly, Seymour scurried up to the loft of the barn where he could oversee the proceedings below. The two Yakimaniacs were dressed in black leather caps and jackets bearing a scull and crossbones on their backs.

'No, you won't, sonny boy'! Maud shouted, entering the barn with a shotgun in her hands. 'I've called the sheriff and he's on his way. Now, back away from my man'!

Mash climbed onto his motorcycle, cranking it up. 'I'm getting out of here before the heat shows! Come on, Stew'!

As the motorcycle began to move, Maud let loose with a blast from her shotgun that zinged past Seymour's head, blowing a hole through the roof. 'YIII-IKES'!!! Seymour yelled as he tumbled down onto Mash's head, wrapping himself tightly around his hat to keep from falling further. His baby rattle whacked against Mash's nose and the motorcycle careened past Bossy-wa-wa and Cafeteria, then THUMP-THUMP-THUMPED up the stairs and into the upper hay loft... across the floor and out through the open loft window, twenty feet above the ground.

Mash and his motorcycle sailed far out into the evening breeze while Seymour, still clinging to the hat, flew even farther, into the outstretched branches of his, now familiar, apple tree. A loud, crunching explosion rocked the neighborhood, bringing on a dozen automobiles with flashing lights and wailing sirens.

At the same time, Stew was trying to escape by running through a side door and across the open yard towards the garbage dump. 'GOTCHA'! Big Jake the Snake easily tackled the bandit, Yakimaniac, by wrapping himself around his legs while Sylvia and Herkimer bound up his hands.

In the heat of the fight, Officer Bilespee arrived on the scene to take them into custody.

That evening, while preparing dinner, Mom was saying to the Wizard, 'My, what an exciting day that was. I'm certainly glad it's finally over'.

'HSSS-ssstth!' Seymour hissed at him. 'Butt out, Lumpkin! Can't you see she has other plans'?

The lumberjack reached up and smacked Seymour off her shoulder, sending him flying across the room and onto the stage.

Still sitting on top of the rain barrel, Squeegy cried out in pain as he watched his friend, Seymour, being abused. Immediately he jumped off the barrel and scurried among the many feet of dancers to get to the stage just as Ellexandra was doing. But right behind her came Lumberjack Larkin, demanding to have his way.

Suddenly, the mysterious man in the black cape glided through the air with the aid of a rope tied to the chandelier, landing on the stage between the scruff and the lady. 'Is this man a nuisance to you, Senorita' he asked with concern.

The lumberjack didn't waste a moment. Immediately, he backhanded Bo, sending him sprawling across the stage and into the corner next to Seymour. Then, from out of nowhere, he pulled a long blade and cried, 'I'm gon'na stick you good, Senor. Ha ha ha'!

Alarmed, Bo said to Seymour, 'He's got my sword'!

Seymour answered, 'Quick, grab my rattle. I'll be your sword'!

'You dont know what you're asking for,' Bo replied.

Zzhonnggg. The sword was thrust next to Bo's head so he grabbed the baby rattle as Seymour stiffened up from his head to his tail.

In only a matter of seconds, Seymour became dizzy from being thrust, parried, spun in circles and thrust again and again. Many times he ducked and sprung back like an accordion to avoid colliding with the wicked blade in the hand of the woodsman. He screamed, 'GET THIS THING OVER WITH, WILL YA? Im getting weak '!

As the duel got under way, the dancers all stopped and gathered around the stage to watch the entertainment, thinking it was a part of the evening show.

Seymour is an adulterous adventure cartoon about a contemporary little Asp with a winning smile. Typically, he also displays snakelike tantrums which flare from mild to wild with every turn of events. From early in his career, he learns to cope in the most outrageous predicaments any creature ever got into.

Seymour enjoys a simple family life, while growing up with plans of becoming a great hunter. But he becomes side tracked by more ominous events in his new career.

Intended for a readership of youth through adult, Suddenly, Seymour is a life-learning guide for all humans, as well as other snakes (at least according to Seymour).

The author, distantly related to Seymour (on his In-Law's side), presently resides where the adventures of Seymour still occur, even today! Semi-retired, which means semi-working, he is on constant vigil for additional family members that he would otherwise try to avoid.