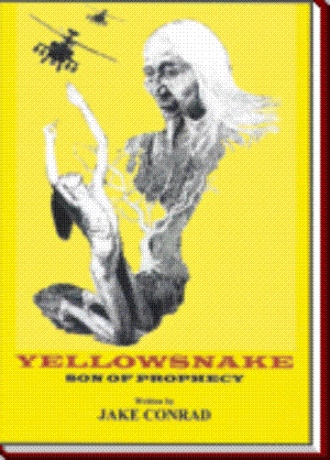 Nearly three months had passed and the team of doctors were becoming concerned that Yellowsnake might remain in his coma indefinitely. They knew his chances were dismal to begin with, but had hoped that as his body stabilized, his consciousness might return as well. They had tried everything they knew to bring his mind from its long sleep, but thus far, they had been unsuccessful.

Throughout the tedious and nerve wracking weeks, Liliana and her mother had resided at the hospital family quarters, never far from the fallen soldier.

At this point in their vigil, the doctors felt compelled to tell Liliana, Hotona and Jimmy that Yellowsnake's future did not look good. 'Frankly, if he doesn't come out of his coma soon, his condition may destabilize and throw him into complete reversal.' Their words were alarming.

With good reason, the entire family was being asked to accept the possibility that Yellowsnake's life might be coming to an end. However, a look of determination blazed brightly in the eyes of Hotona. There was no way she was going to accept the imminent death of her son.

As Hotona looked into Liliana's eyes, a resolutely defiant mother spoke. 'Liliana, I must leave now for a few days, but Yellowsnake's father will remain here while I'm gone. There is someone I must see.'

Hotona had listened to the doctor's gloomy forecast of Yellowsnake's deteriorating condition, and had earlier sensed that his time was indeed growing short. Her mind had been flooded with thoughts of urgency. She knew it was imperative that she now visit the Yaqui medicine woman, Shahana, her long-time friend.

She offered no further explanation as she gathered her belongings and left.

Many years earlier, when Yellowsnake was a small boy, Hotona had explained to her inquiring son that there were many things which conventional medicine could heal. However, there were also many things modern medicine alone could not do to heal a man's body and, equally important, his spirit. She told him that no matter what he learned throughout his life, he must never forget the mysterious healing power of the spirits.

With the aid of a small commuter plane that could carry her out of Phoenix, she arrived at a neighboring town outside the border of the Yaqui Indian Nation. An old friend living nearby the town agreed to drive Hotona to the home of Shahana.

The lonely brick hut, set well apart from the other villagers, had not changed in appearance. After Hotona thanked her friend who had so cordially agreed to wait while she spoke to Shahana, she knocked on the weather-beaten oak door. As it slowly opened, the deep brown penetrating eyes of the woman whom she had not seen for many years, met her gaze.

Strangely, while Hotona detailed the account of Yellowsnake's tragic mishap, she could sense by looking into her old friend's eyes that the wise medicine woman was already aware of the tragic occurrence. Shahana listened intently, but said nothing.

Before Hotona was able to complete her urgent request for Shahana to join her at the hospital, the old woman had quietly moved to her adjoining room. She had begun packing a few belongings for the trip which lay ahead of her. Included in her bag were three leather pouches, the contents of which Hotona dared not ask. Shahana motioned that she was ready to leave, and an hour later, the two arrived at the small airport. Hotona was not surprised when she discovered that Shahana had never flown in an airplane. And furthermore, Shahana had no intention of flying high in the sky in the 'iron birds' which had flown over her hut. She respected Shahana's wishes. Hotona agreed to her friend's request that they ride in a more safe and dependable way. After thanking her chauffeuring friend, they were soon aboard a bus, bouncing along the monotonously long road headed in the direction of San Diego.

The bumpy bus stopped only at brief intervals to allow the passengers to stretch their legs, then continued through the long night. Shahana had spoken few words during the ride, and late the next morning, the weary travelers entered the hospital waiting room.

Hotona wasted no time in introducing Shahana to the family members, and a handful of doctors who had noticed them enter the waiting room. Hotona briefly explained the reason for Shahana's sudden visit. 'Shahana must see Yellowsnake now, for there is much to be done.' Shahana's dark eyes flashed as she smiled only faintly at the doctors. She grasped Hotona's arm for support as they walked slowly toward Yellowsnake's room. Around Shahana's shoulders was the same brightly colored, though now faded shawl she had worn for more than fifty years.

They quietly entered Yellowsnake's dimly lit room. Shahana seated herself comfortably close to his side, then reached into her dark bag, gently removing the three leather pouches. There seemed to be a mysterious confidence about Shahana as Hotona remained silent, curiously watching her every move. Then Hotona saw Shahana's dark eyes looking over her shoulder toward her, as if to say, 'You must leave me now, for what I have to do, I must do alone.' Hotona knew that her brave son's fate was now in the hands of Shahana. The doctors and nurses could never understand. But she did.

After she had closed the door quietly behind her, the concerned mother retreated to the hospital waiting area, knowing it might be some time before Shahana would return from Yellowsnake's bedside.

The next four hours would forever remain a mystery, for only the spirits of hundreds of years past knew what was transpiring within the confines of Yellowsnake's room. Yellowsnake's door finally opened, and Shahana, looking weary, shuffled slowly toward the anxiously awaiting family, and most curious doctors. She had a look on her face which revealed she had undergone an enormous undertaking.

When the young Comanche halfbreed was recruited by the U.S. Army Rangers, little did Yellowsnake know where the fortunes of war would take him.

Once Colonel Lincoln spotted Yellowsnake and his survival instincts, their lives would be enjoined for many years to follow. Yellowsnake, under the guidance of his wise Colonel soon wreaked havoc upon the Viet Cong.

After his Viet Nam army tour, Yellowsnake suddenly found himself employed by the CIA, and once again thrust back into the jungle as an invisible operative for the Company.

From the early moments of his life, his spirit and soul were being closely watched over by Shahana, a mysterious Yaqui Medicine Woman.

After his miraculous recovery, the healing warrior's path crosses that of Jake Montana, an adventure lover and treasure hunter who soon forms a lifelong bond with Yellowsnake.

Their adventurous treasure search takes them deep into the mountains of Arizona in pursuit of one of the fabled Peralta treasure caches.

Yellowsnake's perilous life had seen him working covertly for Daniel Ortega in Nicaragua and for the sinister Manuel Noriega under the close scrutiny of the CIA. However, he knew that with the help of Shahana's watchful spirit he would someday enjoy the company of those he trusted and be blessed with adventure on safer ground.

Jake Conrad was born and raised in the upper Midwest surrounded by water. Whenever time will allow, Jake and his dear friend Yellowsnake seek out new adventure in the rugged high country.

The Author is a former Marine and after meeting Yellowsnake and hearing his life story, he gained an early appreciation for the harrowing experiences which began to unfold. Conrad felt compelled to write a story which would reveal the remarkable life, and near death of a modern day warrior. The adventure carries him into the war torn mountains of Vietnam, then weaves its way through the rugged and mysterious mountains of Arizona. After hearing Yellowsnake recount his terror filled life, Conrad had no doubt that the mysterious Medicine woman had indeed seen him through the ordeal.

'I found YELLOWSNAKE, SON OF PROPHECY to be an action packed story from beginning to end. It is a recommended 'Must Read.' The man and the book are both exciting.

Author The Book of Secrets; Ways to Wealth and Success

The Mystery of the Talking Stones

Wind Spirit; The Making of a Medicine Man