A Woman's Life in Letters 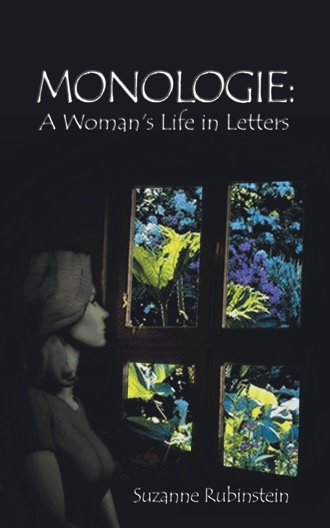 I have that raw, scrubbed, newly emergent feeling that comes with being discharged from a mental unit. I feel as though I’ve been skinned alive with a stiff bristled brush. This morning, clutching all of my belongings in a paper bag they’d given me, I walked out of the hospital and back into my world. Nothing had changed.

Sam had taken duct tape and wrapped it around and around the driver’s seat of the car to hold a backrest in place. It looked strange and ugly. He taped a lot of things, the cabinets at home were full of tape, all different kinds. I suppose he felt he couldn’t hold things together any longer. Or maybe, and I knew this was closer to the truth of it --- maybe he wanted to restrain or bind the object as if by the very act of taping it, he could forever bring together what would by its nature separate or even simply fall apart with time. To hold it very still, very secure, but completely inert -- that was why he taped things.

I'd like to thank you for the concern you showed for me during my recent hospitalization. You were courteous, visited me on a daily basis and proved perceptive and responsive ... Important qualities in a doctor.

I feel I must, however, clarify my position for you. When I left the hospital two weeks ago, you informed me about the professional courtesy involved in the referral of my case from Dr. Savarino and you gave me a prescription for two weeks of medication. I told you I would call you in a "few weeks." And, good to my word, that’s exactly what I did. Although you’d recommended on my discharge papers that I pay a return visit to Dr. Savarino, I made no promise to see him. I do not consider Dr. Savarino my doctor at this time. My reasons are personal. They have nothing to do with either you or Dr. Ciaclos, so you need not worry about that.

During our telephone conversation last week, you strongly advised that I see a psychiatrist or, at the very least, become an outpatient at Mercy's clinic. Maybe if I tell you something about myself, you’ll see that my options are somewhat more complicated than the two you’ve suggested.

Mental illness is extremely episodic in my case, and, considering the stressful life I lead, may just be the normal adjustment to make. In any event, it’s been more than 11 years since I was last hospitalized. During that time, I managed very well, with the exception of the tragic death of my oldest daughter, Jane, in 1985.

But this last episode came out of left field, right out of the blue for me. One minute I was on track, in control of my life, the next I’d completely lost hold of comfortable reality and my own sense of well being. Again, I'd like to thank you for your part in intervention and the long return to wellness. But you can see that for me to seek a psychiatrist's help at this point would needlessly retrace and duplicate what has gone before, while to join Mercy's clinic on my own wouldn’t help me to make use of whatever insights emerged from this last episode. Recall that we both agreed that some form of marital counseling would help to resolve the conflicts involved in this episode. But as you pointed out, "your husband doesn’t have a problem, because your husband doesn't think he has a problem" a condition of innocence, in my opinion, that serves to excuse his incivility.

All of this to simply explain my dropping from sight for a few weeks! I’m continuing to take the medication you prescribed.

I'd managed to capture his interest with my letter. He called and asked if I wanted to come and see him. He gave very specific directions to his office. I liked that. He was practicing from an office in the basement of his house. There were scuffmarks on the door to his office, I remember, where his son had kicked it. I imagined the boy must have sensed that something important, something he was not privy to went on behind that door.

I entered by way of a narrow corridor that ran between the garage and the house and then turned down a flight of steps to the basement. Sometimes he left the upstairs door ajar for me and I came down alone to find him at his desk or on the phone. But mostly he ushered me in, accompanied me on the stairs. He had a sort of elegant courtesy toward me--allowing me to descend before him, making sure I was comfortably seated, was it too hot, too cold in the room, a civilized deference, a decorum that asked nothing from me and that I was unused to.

From the times we met in the hospital we were accustomed to having face-to-face discussions either across a table or in chairs opposite each other. This habit had become very important. We met as equals; there was nothing to obstruct. In the office, he had the ubiquitous massive desk and executive chair, but instead he chose to sit directly across from me on a card table chair during our sessions. I was pleased with this arrangement. I felt we’d both been instrumental in deposing the authoritative "I."

A woman emerges from a brief stay in a mental hospital feeling painfully raw, clutching all her belongings in a paper bag. The world she re-enters is clouded by experiences of loss, marital discord, and self-doubt. Trying to understand her place in that world, she undertakes therapy with a psychiatrist as different from her as he could be.

Monologie is a series of letters written by that woman to her psychiatrist.

Although his replies are never heard, a picture gradually emerges of two people struggling to communicate across differences in gender, race, age, culture, and language. She is a transplanted Midwesterner, of Jewish and Irish parentage; he is younger and has come to New York from Haiti. She writes and speaks to him in English, although she understands a bit of his native French. Together they try to understand who she is and what has happened to her.

The letters, and the narrative into which they are woven, reveal a complex woman actively engaged in the process of self-discovery and self-definition. As the story continues, it becomes clear that the letters themselves are part of the healing, the act of writing itself a part of the therapeutic process. Her use of language -- her own, his, and that of the writers whose work she has made so much a part of herself -- allows her to stand outside of herself to guide her own recovery.

There is no triumphant conclusion here, no therapeutic breakthrough. What Tess finds through her letters, and the good fortune of someone who reads and responds to them, is a way of accepting herself and her life. By the time the letters end, the reader knows she is on firmer ground. Has "therapy" actually taken place here, or did the writer heal herself? Readers will want to decide for themselves.

Suzanne Rubinstein has been making things up since she was a girl in Chicago. Only recently, however, has she begun to write them down. Having lived and worked in New York long enough to appreciate it as the greathearted city it is, she makes her debut here with a collection of letters that cross the boundaries of race, gender, and culture.

Ms Rubinstein holds a Masters degree in Women's Studies from The Graduate School of the City University of New York. She is currently working on a series of short stories set in a Catskill mountain resort that has seen better days. She lives with one musician and one cat. She has three daughters.