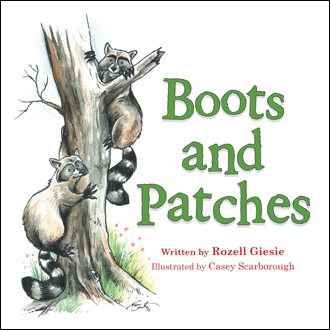 One morning, Mother let in the raccoons into the house as she was up early making pancakes. She had put the pancakes on the table and went outside to call Father in for breakfast. Boots and Patches did not go straight to the kid’s room as expected. Instead, they found the unguarded pancakes, butter, and syrup. They quickly started to feast on the breakfast spread. The syrup was all over the raccoons, as they remembered their goal to wake the kids. So off they went down the hall leaving a sticky trail along the floor. Boots and Patches found Jim and Ruth still in their beds and soon the kids, the sheets and pillows were all covered with syrup.

Boots and Patches are two orphaned raccoons adopted by a brother and sister named Jim and Ruth. The little raccoons turn the farm upside down, getting into mischief; they also prove themselves very helpful around the farm.

Rozell Peikert Giesie grew up on a farm in the tiny South Texas community of Egypt. Growing up on the farm was always an adventure, especially when it involved her sister or one of her five brothers. There was always something to do with the pets, farm animals and the endless imagination of a group of kids. It was some of these life adventures that led her to write this and other stories of growing up in the mid-1930’s to 1950’s. Rozell married Ernest Giesie, and they have three children, six grandchildren, and two great-grandchildren. Illustration by Casey Scarborough. Casey lives in Pearland, Texas, with his wife KC, and son Brady. Casey has a bachelor of fine arts degree from Sam Houston State University, Class of 1988. He works in Pearland as an art teacher and golf coach, and KC, Texas A&M class of 1996, is a junior high school counselor.