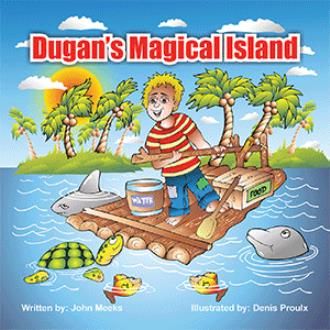 In the distant was a much larger island that was somewhat mysterious because it was know to have magical views from atop its mountains and islanders that had the ability to communicate with the sea creatures. Dugan was fascinated with the dolphins, whales and sharks that lived in the waters and always wanted to venture beyond his island to learn more about the sea creatures.

This was a special island because the surrounding ocean was known to have many species of sharks and whales. Dugan was particularly fond of the sea creatures especially the sharks and whales. Growing up on the island Dugan spent much of his time on the outer edges of the island not far from where he lived with his family. Dugan would play on the beaches and climb the rock cliffs. He would not venture to far out into the waters because of the sharks that were just outside the barrier reefs.

"A beautiful and inspiring story that shows the importance of going after your dreams, no matter what hurdles must first be crossed. "

A children's book that sends a message of determination, self confidence, a passion for learning as well as overcoming challenges.

A young boy named Dugan has a desire to get to the magical big island and learn about the special abilities of the islanders.

His journey takes him on an exciting and adventurous trip to the magical island.

"A beautiful and inspiring story that shows the importance of going after your dreams, no matter what hurdles must first be crossed."

A book that can be enjoyed by adults a well as children. A Life lesson about hard work and finding a interest that you can be passionate about.

Growing up traveling the world as a military dependent and rising through the ranks of the corporate world has provided me with unique expericences and outlook on life.

As a father and grandfather I have used some of my life's travels and values along with the time spent growing up in Hawaii to tell a story for my children and grandchildren.

Now living in Ohio, I am managing a global business with employees around the world.