The 4th of July A Celebration of Independence

The Birth of the United States and Her Founding Fathers 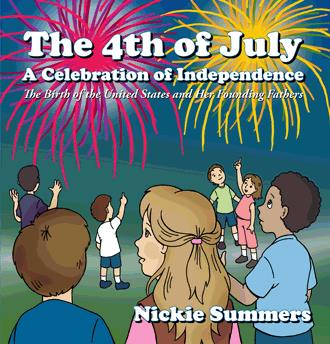 The United States is a very young country, but her story of freedom and liberty teaches history that is hopeful and inspirational.

This book introduces preschoolers to the birth of the United States of America, the legacy of the Founding Fathers, and the significance of the Constitution.  Take a journey through America’s history and discover why the 4th of July holiday is much more than fireworks, barbeques, and summer fun!

Born into a military family, Nickie always had a patriotic spirit. Both

parents shared historical insights from their personal experiences and

September 11, 2001 was a day that changed her forever as it did most

all its symbols. She became more educated on the role of government

Constitution. Reconnecting with the Constitution gave Nickie the clarity

to see the fragility of freedom and liberty in the United States today.

As a small business owner, wife, and mother of two, Nickie

believes that the Constitution is under assault and it

will be America's youth who must stand up to protect it.

Education is the key and the first step to engage America's youth to protect freedom and liberty.