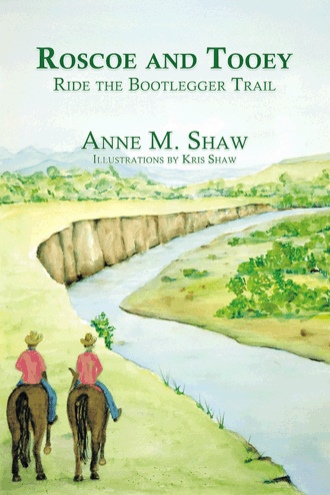 It must have been after midnight when I woke to the sound of a car crossing the ford about fifty yards away. I wondered who would be crossing at this time of night but went back to sleep almost immediately, wasting no time thinking about it. The next thing I knew I was wakened by the sound of metal on metal—a clinking sound. The horses at the end of their picket lines sometimes made clinking sounds but this was different. I looked over at Tooey and Longwood. They were hunkered down, sound asleep. As I was wondering about the origin of the sound, I heard what sounded like voices. Suddenly I wasn’t sleepy anymore and my curiosity was killing me. I got up silently and slipped on my boots. “I might as well take advantage of the fact that I’m up and awake and take a pee,” I thought. But before I could do anything I was reminded of why I was up by the sound of voices. I couldn’t hear them well enough to understand what they were saying so I decided to move in closer. Ruff was immediately at my side and I motioned for him to be quiet. “Better be careful,” I whispered, “’till we know what’s going on. Must be some funny business or they wouldn’t be working at night.” I could see the light of a flashlight moving around just up the river from where we had made our camp. The men were working on this side of the river but on the other side of the trail. It was hard to move through the dry brush without making noise so I had to go slow but I finally made it to the road. It was going to be risky, the moon was full and I was going to have to cross ten yards or more of bare ground in full moonlight. There were no trees to provide cover and if anyone looked this way he would be sure to see me. I decided to work my way up the road a little to where there were some trees blocking the light of the moon. It took me a little longer, but I finally slipped across the road in the dark with Ruff at my heels. Just as I did, I heard the sound of a motor. There was a car coming down the hill from the south. I hunkered down to wait, my hand on Ruff’s back as it forded the river. Suddenly it seemed to be upon us, its headlights shining directly through the sparse brush where we were hiding and blinding me as I looked toward it. The car slowed and pulled to a stop. Two men got out and walked toward us. “They have to have seen us,” I thought. But apparently we’d been hidden by the brush between us and the light, for just as I thought they were going to reach out and grab me and ask me what I was doing, they passed by, walking toward where the voices were coming from. “They should be done by now,” one of the men said as they passed within two feet of me. He was so close I thought I caught a whiff of alcohol on his breath as he walked by. “I wouldn’t count on it,” said the other. “Your brother-in-law is about the most worthless s.o.b. on earth.” “Yeah, I never did see what my sister saw in him.” The men continued talking in low voices but they had moved away and I couldn’t make out the words. After they had gone by, Ruff gave a low whine as if to tell me that we shouldn’t be there and to remind me what happened when you messed with characters such as these. But I petted him to reassure him that I knew what I was doing, although I wasn’t entirely sure myself. “That’s all right fellow, we’ll be careful.” And with that I began to creep closer to where the other men were. It was slow going for the brush was dry and there were dry branches everywhere, but finally we were in a position behind a large log, where we could see and hear the four men. “Did you bring any booze?” “There’s some in the car. You can have some when you’re finished.” “How come you’re so high and mighty? I don’t see you ever getting your hands dirty.” “I did my bit long before you got in on the action. You can’t just come in and pull a share away from the other boys without working for it. Besides, if it wasn’t for me you wouldn’t be here.” “Well, I’m not so sure I got such a bargain, having to marry your sister.” “You’d better watch your mouth and if I ever find out you’ve laid a hand on her I’ll kill you.” “Okay, calm down boys. Let’s get this business done with before we talk about anymore killing.” “There, we’re done now and by the time anyone finds this spot, we’ll be long gone with nothing to connect us to it.” He walked over to a pickup parked by the river and threw the shovel he’d been using in the back. “Now I could sure use that drink.” “Help yourself; it’s in the car, under the front seat.”

When Roscoe and Tooey leave Fort Benton after their run-in with Cronkit out in the Little Rocky Mountains, as told in "Roscoe and Tooey, Montana Runaways," they ride out to Clint Stranahan's place on the Teton River. There they learn to milk cows, to put up hay and to irrigate the hay fields. After working hard all summer they are asked to help with finding some missing cattle for a rancher a few miles west on the Teton River. They pack their bedrolls and some gear thinking they'll only be gone for a day or two at the most.. But when Roscoe hears some men burying something by the river late at night, their search for missing critters turns into a more deadly adventure. They follow the Bootlegger Trail into Black Eagle where they learn to their chagrin what the men were doing out on the river so late at night.

Anne Stranahan Shaw is a native of Montana and grew up in Fort Benton and on the Missouri River in northern Montana where her family had a ranch. She raised registered Morgan horses for a time and worked with young people in 4-H. After receiving her bachelors degree in English Education from the University of Great Falls, she studied music at the University of Montana in Missoula and graduated with a Bachelor of Music Education. She was a bilingual teacher in several grade levels for the Los Angeles Unified School District and spent one year in Durango, Mexico teaching English as a Second Language to first graders in an American School there. It was during that time that she began writing the Roscoe and Tooey book series. After retiring in 2000, she started a bookstore, The Havre Book Exchange in Havre, Montana. "Roscoe and Tooey Ride the Bootlegger Trail" is a sequel to "Roscoe and Tooey, Montana Runaways" and is her second novel. Ms. Shaw and her husband raised five sons and have eight grandchildren and eleven great-grandchildren.