A Riveting Account by the Last Guard to Leave Alcatraz 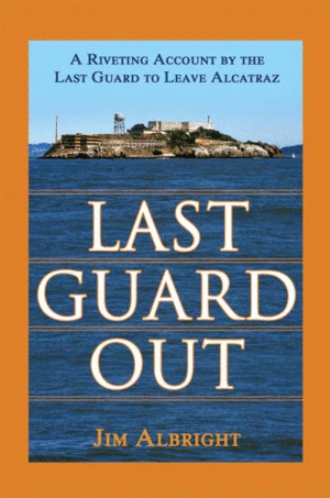 In early June 1962, I went with a pick-up softball team from to play a friendly game with a team from .  I was chasing a fly ball when I stepped in a gopher hole and twisted my knee.  It continued to hurt and I went to a local hospital to have it examined.  It wasn’t broken but severely sprained and serious enough that they wrapped it and had me on crutches. This didn’t really interfere with my duties as a guard,  because at that time I was assigned to the clothing room and extensive movement wasn’t necessary.  Further, I expected to be off the crutches in a short period of time.

On the morning of , I was still in bed.  My shift started at that morning. The emergency alarm in the prison sounded and it startled me. It was loud enough for all island residents to hear and I’d never heard that before. The clock said as I quickly collected my thoughts, got dressed and headed for the prison. There was no question of what I had to do. When an employee, whether on or off duty, hears the emergency alarm they are to report to the prison with haste. What a time for an emergency I thought, with me on crutches. About halfway up the hill I met the Lieutenant and asked him “What’s up?” He replied “I don’t know.  We have a couple of missing inmates.”  He told me to go watch the back of the cell house, which I immediately did. Small pieces of information slowly filtered in and when my lunch relief arrived curiosity was killing me.  I desperately wanted to know what happened and see what was going on first-hand. By this time I knew which inmates were missing and went directly to the cell of one of them – John Anglin.  As I stepped up to his cell I could see the false head still in place on his bunk. I was amazed how real it looked.  I also knew that when the alarm sounded the Warden and Captain had already implemented the escape plan and wheels were in motion to locate them. The missing were John Anglin (AZ 1476), his brother Clarence Anglin (AZ 1485) and Frank Lee Morris (AZ 1441). I recalled that in all prior attempts, I think there were about 13 of them, no one had ever escaped; many tried, but all were accounted for one way or another and I honestly thought the same thing would happen here. I thought, the fact that many tried and none made it, and all the inmates were fully aware of this - “Why would they take the risk?”  Stories concerning the escapee’s whereabouts were all over the map, but the bottom line was they still had not been located.  In the meantime I wanted to learn more about how the escape evolved, and traced the route they took from the cell to the water. This opened my eyes, and reality set in.  The prison staff, from the warden on down, gave them all the opportunities they needed to make it happen.  Not to undercut their brilliant scheming and planning, they also took advantage of poor management and other factors that aided their plan. When authorities finally decided that they couldn’t located the inmates they officially listed them as missing, presumed dead (drowned). In a July 1962, report from Warden Blackwell to the Director of Prisons, Blackwell wrote “with the exception of the negligence on the part of the staff permitting such an escape to be possible, all employees in each and every department willingly and without complaint worked long and unusual hours attempting to secure the institution and to find the three escapees or, if possible, their floating bodies in the bay.”  What actually occurred as I know it, heard about it, or made an intelligent judgment about it, made me realize that I too was a part of all this. The story will have no ending until all three are accounted for one way or another; however, what actually occurred I want to explain, good and bad.

All the control, the restrictions, the strict regulations, the constant monitoring of inmate movement couldn’t stop these three inmates from planning and executing this most ingenious and famous escape. They did escape and that was bad enough, but how they did it is most interesting. This famous escape was glamorized in the movie “Escape from ” st

The Last Guard Out is the fascinating true story of one man's life as a guard behind the merciless concrete walls of .
I was newly assigned to the infamous island penitentiary of .  Reporting to required me to uproot my wife Cathy and young son Kenny from to .  As we approached via of the we got our first foreboding glance of with a dense circle of fog surrounding it.  A strange sense of dread came over me.  I looked at our young son asleep in the back seat, then turned to my wife next to me and I whispered "What The Hell Did We Do".
After moving on to our thought on life quickly changed and we decided not to apply for a transfer out, which consequently left us there until the closed in March of 1963.
Because of our newly born daughters foot problem they left us there until June of 1963 making me The Last Guard Out.

I started on on as a young man of 24 years with no prior law enforcement experience.  While working on I received two promotions due to my over all work ethics and proper responses during stressful situations, such as working the control center during the last two escape attempts.
After closed I spent the next twenty two years at various positions at several other prisons before retiring from , In. in 1985.  Those twenty two years were filled with various experiences and challenges such as riots, food/work strikes, and escape attempts.  I captured three escapees while I worked at that institution.
All though my twenty six years of prison service were filled with many memories, will always remain the highlite of my law enforcement career.