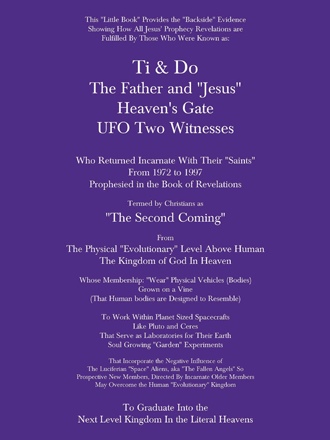 This "Little Book" provides detailed evidence from everything Jesus prophesied to show how and why those called, Ti (Tee) and Do (Doe) were the new incarnations of the Ones referred to as the Father and Jesus, who with Their Crew of Student "Saints," were on earth again to fulfill the promised return of Their Kingdom during these "End Times," through Their task recorded as the "Two Witnesses" in the Book of Revelations that was completed when they exited their incarnations in 1997 - seen in the world's news as Heaven's Gate. Here is a tiny bit of the evidence of Their return that will be covered in these next pages in great detail, examining most every verse from the Book of Revelations, in context with both the Old and New Testaments and in consideration of the many translation options from the Hebrew, Aramaic and Greek and most importantly in how Ti and Do's teachings, behaviors, ways and lifestyle coincided, without Their trying to do so, as I, Sawyer witnessed as Their student for 19 years. -Father and Son both reside, (dwell with, make Their abode) with Their Students, incarnate in human flesh vehicles. (Joh 14:22-23) -They both have new names and the One who was incarnate in the name "Jesus" identifies His Father's incarnation. (Rev 3:12, Rev 14:1) -Their names, Ti (Tee) and Do (Doe) are related to notes, an octave apart, in a Song in the musical, "The Sound of Music", they felt was instigated by their Heavenly Father to help them awaken to their task. (Rev 5:9, 14:3) -The Father takes a female human body and "Mind/Spirit births" His "Son" to the Throne to Spirit Birth each who are in their Student body. (Rev 12) -They come incarnate in fulfillment of the task of the Two Witnesses to speak publicly (prophesy) New Revealing about the reality of Their Kingdom, how and when it can be entered, that serves to gather Their returned "Saints," the Souls who were their students with Jesus and Moses. (Luk 17:30, Mat 24:31). -They are both Olive Trees, Lampstands, and are Anointed so are both Christs. (Rev 11:3-4, Zec 4:1-14) -The 4 Living Beings and 24 Elder Students arrive on earth from Heaven (a Kingdom of Heaven physical spacecraft in outer space, Jesus referred to as a "mansion" (dwelling place)) by intentionally crashing some primitive spacecrafts to sacrifice their Kingdom of Heaven made physical bodies to leave a record of their physical existence that enabled their Soul (Celestial) Body's incarnations into prepared human vehicles to finish what they began with Moses and Jesus in their Overcoming of humanness under their Two Older Members direction. (Rev 4:10, 8:5, 9:1) -These Two speak plainly, (open, bold, confident), not in parables (Luk 12:2) and Students can ask the Father questions directly. (Joh 16:25-27) -Their prophecy is focused in the West and Southwest U.S.A., described as the spiritual (symbolic) Sodom (scorched, desert) e.g. Las Vegas, Egypt ("two straights" (Streets, Ways (FIRST & LAST)) and New Jerusalem; California (Los Angeles) to Texas, (Rev 3:12), to a "new nation (people)" (Mat 21:42-43), leaving Jerusalem in Palestine/Israel "desolate" (empty of Their Updated Mind/Spirit - Presence). (Rev 11:8, Mat 23:37-39) -In 1975 They are "subdued"(overcome) by the U.S. national media, mouthpiece of the "Beast" - the Secret Govt (Mystery Babylon) formed because of the release of the Luciferian Space Aliens from their "bottomless pit" prison in the 1940's to 1950's during the 5th Angels Trumpet Sounding. (Rev 9, 11:7, 12:4, 17) -The Father's incarnation Exit was seemingly "natural"-"Earth Opened Her Mouth." in 1985. Do and Students Exited by laying (falling) down Their human bodies in 1997, shown by the comprehensive translation of the Greek "apokteino auto" as "to separate by dying Their selves." (Rev 11:7,16, Rev 12:16) -Their ascension, Jesus called a "spirit birth," compared to wind, not seen as physical bodies going up. The "cloud" (of light) was the Hale-Bopp Comet with it's photographed "companion object." (Rev 11:12, Joh 3:5-8) -Do Comes Public as the return of "Jesus" in 1993, shown as sitting on a "white horse," the human body He took named Marshall Applewhite, which He purifies to Recover Virginity. "Bow" represents the Covenant (rainbow) with the "litter/fold" He "births" by directing each Students own Overcoming of Humanness. (Rev 6:2) -The Red/Ruddy "Horse" - G.W. Bush, et al, used the 9/11 WTC attacks - the "great earth(shaking)" (1st Fall of "Babylon") to wield a great sword (military) for a perpetual "war on terror." (Rev 6:3-4, 11:13, 14:8) -Barack Obama, et al, was the Black/Deep Blue (jacinth) "Horse" presiding over the stabilizing of the Global Financial Crisis (2nd Fall of "Babylon") manufactured to usher in the U.S. BEAST's riding the yolk of the New World Order (U.N.) (Rev 6:5-6, Rev 13, 14:8, 18:2) -Sign of Opening of Temple of God in Heaven revealed by NASA Dawn spacecraft photos of dwarf planet Ceres' cityscape of lights with 5+ mile high crystal-like Tower as evidence of 2017 4th Seal Opening: Green (Space Alien tare (weed) harvest, NWO front promotion of human caused global warming) Horse (US President) agenda, accelerating death in Tribulation/Judgment Hour = LAST Harvest Wave (Rev 6:8, 11:19, 14:20, 15:5) -Luciferian (restricted Space) Aliens are depicted as fowls, birds of prey, locusts(Mat 13:4;Rev 9:3,18:2, 19:17) -Afterward, Do returns with His "Armada" of brightly shining (glorious) Clouds of Light - "horses" (spacecrafts) for every eye to see, with His First Fruit Graduate (Saints) all "wearing" Their new Kingdom of God "made" (grown to an adult on a vine, not born of woman) physical, biological bodies, with His being "like the Son of Man," Jesus' "dipped in blood body (vesture)."(Rev 1:7,11:19,14:14,16:15,19:11-14, 1Co 15:39+)

This book provides detailed evidence from everything Jesus prophesied, often broken down to the root definitions of terms from the Greek and Aramaic/Hebrew languages which manuscripts were written in, to show in context by numerous Bible records, how and why those called, Ti (Tee) and Do (Doe) were the new incarnations of the One referred to as the Father and before then, Jehovah and Elohim, with the One who was incarnate in the vehicle (body) named Jesus, and before then Elijah, Moses, Enoch and Adam, who with Their Crew of Student "Saints," were on earth again to fulfill the promised return of Their Kingdom during these "End Times," through Their task recorded as the "Two Witnesses" in the Book of Revelations, that was completed when they exited their incarnations in March of 1997 - seen in the world's news as Heaven's Gate.

Ti and Do left extensive records of everything they came to awaken to know over their combined 25 years incarnate. As I spent 19 fully dedicated years with them I drew upon their records and my experience to describe many new translations of terms and new interpretations of most all Book of Revelations records.

Finally, I studied world history and current events that can be shown to be valid reference points in many prophecies. This includes many unusual events NASA has photographed in outer space as Jesus prophesied; a cityscape of Lights on dwarf planet Ceres, earth-like qualities to dwarf planet Pluto, hexagon shaped top on Saturn, spire like towers on the Moon, complicated objects that resemble Star Trek's star-ship enterprise in the sun's corona, comets that are comprised of several to seven objects flying in V formation, or having companion objects with them and parts of UFO and Luciferian space alien reports, holograms like Fatima and Spirits.

TI & DO The Father and "Jesus" Heaven's Gate UFO Two Witnesses, Who Returned Incarnate With Their "Saints," From 1972 to 1997 Prophesied in the Book of Revelations Termed by Christians as "The Second Coming" From The Physical "Evolutionary" Level Above Human The Kingdom of God in Heaven Whose Membership: "Wear" Physical Vehicles (Bodies), Grown on a Vine (That Human bodies are Designed to Resemble) To Work Within planet Sized Spacecrafts Like Pluto and Ceres That Serve as Laboratories for Their Earth Soul-Growing "Garden" Experiments That Incorporate the Negative Influence of The Luciferian "Space" Aliens, aka "The Fallen Angels" So Prospective New Members, Directed By Incarnate Older members May Overcome the Human "Evolutionary" Kingdom To Graduate Into the Next Level Kingdom In the Literal Heavens.

In 1971, at 19, I hitchhiked from NYC to Mexico via Vancouver, B.C. where I eventually homesteaded in the mountains. After a winter, I was deported and ended up in Waldport, OR where as a hippie musician explored spirituality but was left wanting until those who would later be known as Ti and Do came to town, saying they came from "the same Family as Jesus", on earth to demonstrate to humans how to start a metamorphosis, aka "Christing," to become a member of The Physical Evolutionary Kingdom Level Above Human, where they had physical bodies appropriate to their society and traveled in spacecrafts that were often described in the Bible as a "cloud of light," today a UFO. 34 adults left families, friends, careers and homes to join with them living as transient, celibate monks with no trappings. They became known as the UFO Two, who were not religious or spiritual, but who said they were fulfilling the Two Witnesses prophecy in the Book of Revelations. I believed in Jesus but was not a Christian and knew nothing about UFO's, yet it all made perfect sense. Living in the wilderness for 3+ years, Do named me Sawyer as the camps chain saw operator. In 1993 with no obvious reason, I broke my celibacy vow with myself and decided to leave in 1994 after 19 years, though still a believer. After they laid down their lives ceremonially in March 21-22, 1997 as the Hale-Bopp Comet was nearest, called Heaven's Gate, I gave many interviews to the NYC based media. I then fathered a baby and began to have dreams of Ti and Do and fellow crew members and they helped me re-awaken to their reality over the next ten years that resulted in my writing this book.