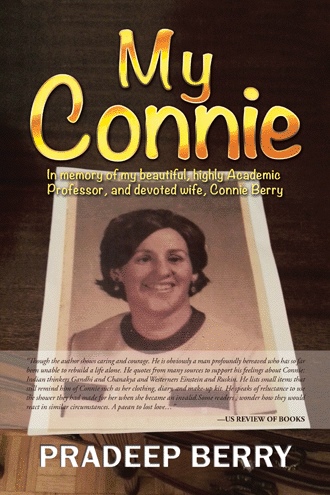 Everything changed for Pradeep K. Berry on February 28, 2015. That was the day his wife of forty-one years, Constance A. “Connie” Berry, died. He’s been mourning ever since, and he seeks to cope with his loss in this tribute to his beloved spouse. In My Connie, he celebrates their love—a love that would have never happened if he hadn’t left India to go to the United States. He only had seven dollars at the time, and he could not have dreamed that he’d meet a beautiful, intelligent, American wife. The author’s family embraced Connie as soon as they realized she was polite, smart, and self-made. In short order, she became the star of the family. Berry lovingly describes Connie’s qualities, character, and ethics as well as her professional career. He observes that even though he’s been in tremendous pain since she died, he would have never had such a long and happy marriage if he and Connie had not loved each other so much. Connie and Pradeep, both consider themselves as two bodies and one soul. Now, Pradeep is hoping that they will be again two bodies and one soul in the next life. Join the author as he shares lessons on enjoying a happy marriage and honors the woman who made his dreams come true. His only hope is to make some difference in other woman’s lives and how their husband can make a difference in their lives.

Pradeep K. Berry is an executive senior management consultant in banking and finance who has conducted viability studies of thousands of diversified companies to determine whether to loan them money for working capital, mergers and acquisitions, crisis management and investment banking. He plans to write another book focusing on his life, his professional career and his wife’s professional achievement as well. “Mr. Berry’s writing about his shared life with Connie is very thorough. He provides details which help the reader really know who they were and why their marriage was so happy. He also intersperses a smattering of wisdom from those like Nelson Mandela, Mahatma Gandhi and various Indian spiritual leaders, attempting to find a way forward after his tragic loss. The ups of Mr. Berry’s life with Connie always outweighed the downs, until that fateful day of her death when his whole world came to an abrupt end. The strength of this book is not about her death, but about her life seen through the eyes of one devoted husband. It’s a tribute well-worth reading.” —PACIFIC BOOK REVIEW