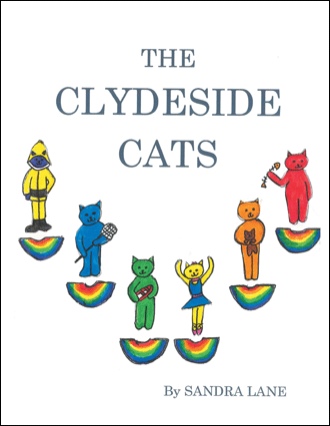 THE CLYDESIDE CATS Beside a very long riverbank in Scotland live some very special animals. They all have tales to tell. Who are they? They are the Clydeside cats and I am going to tell you stories of their adventures. BOBBY BLUE CAT Bobby blue cat was a very peculiar cat indeed. He LOVED to eat tomatoes. Little ones and big ones it made no difference. MMMMM! He was indeed very lucky to live in a tomato nursery in the Clyde valley where the juiciest, reddest tomatoes were grown. His owners thought it was a bit weird but they let him carry on as long as he was happy. Because he was always full of tomatoes he was not good at hunting mice but his owners loved him anyway. One thing made bobby blue cat sad. He didn’t like being sad. He had asked his friends from the next nursery lots and lots of times if they would come over for tea. Their answer was always the same. We love to play with you but we can’t come to tea. We are cats we eat fish. You eat tomatoes and we don’t like tomatoes. Ask us when you have some fish on the menu. Bobby blue cat sat in his bed and thought long and hard on what he could do about this. Because he ate tomatoes his owners never bought any fish for him. What to do, what to do, what to do? Could he ask them to get him some fish? No, he was a cat they didn’t know what he was saying. What to do, what to do, what to do? Could he ask his friends to bring their own fish? Hardly a tea party if they had to do that. What to do, what to do, what to do? Then he remembered. How could he have forgotten? “Oh I can be such a silly cat at times!” he said. What he had remembered was at the entrance to the tomato nursery just beside the shop there was a big, really big fish pond full of big fat juicy fish! There were so many in the pond Bobby blue cat thought his owners wouldn’t miss a few. All he had to do now was figure out how to catch them. 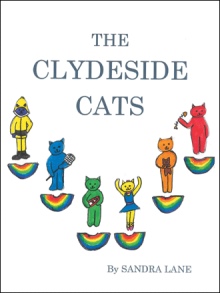 The Clydeside cats are an adventurous bunch. Rhuari Red Cat, Olivia Orange Cat, Ya Yellow Cat, Gertie Green Cat, Bobby Blue Cat and Peter Purple Cat will share their stories with you and take you on a fun-filled journey on the River Clyde in Scotland.

Sandra is a mother of three grown-up children, and she is a retired registered nurse who has a wealth of experience in reading children’s stories. She has brought all her experiences to this collection of short stories in the hope that you and your children get as much enjoyment reading them as she did writing them.