The True Story of a World War II Bomber Pilot and the Crew. 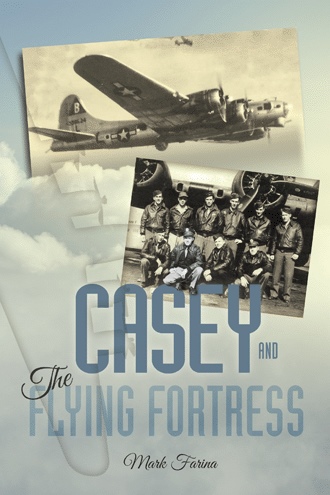 The fascinating story of a young man from Chicago during World War II who becomes a Bomber Co-Pilot and along with his B-17 Flying Fortress crew stationed in England, eventually become Prisoner of Wa after their aircraft is shot down over the German-Dutch border. The story tells of survival as a POW's, eventual rescue. Flash forward 60 Years and the story tells of the discovery of details his three daugters and fellow crew members never knew.

This is a story of a young man from Chicago who becomes a copilot of a bomber in Europe during World War II—from training, to the assembly of his B-17 crew, the men’s struggles after becoming prisoners of war, and the discovery some sixty years later of details his surviving family and fellow crew members never knew.

Mark Farina is a native Chicagoan, has worked as a sportscaster, sportswriter, and government public relations specialist in a career that has spanned forty years. He is a respected sports public-address announcer, having started as a fifteen-year-old sophomore (Steinmetz High School in 1975) and announcing at high school championships for baseball, football, basketball, wrestling, soccer, ice hockey, and girls rugby. He has been a PA announcer for Chicago State University’s Cougars for basketball, women’s volleyball, and baseball since 2012. Mark attended Illinois State University as a communications major, Columbia College Chicago as a radio-TV major, and DePaul University. He has been happily married to Diane Paulinski Farina since 1993, and they have a teenage son, Louis.