Trail of the Sasquatch, a shaman's journey

by Donald B. Young Jr. 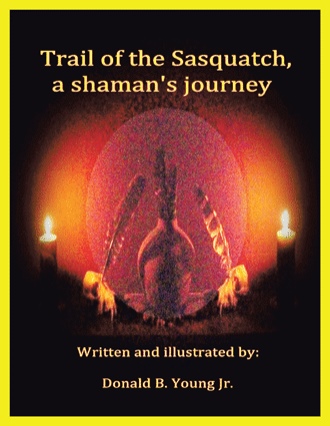 It was a cold January night on the Young's family farm. Junior only eight finished his chores and then made his way across the snow-covered yard toward their house. The northeast wind blew hard, and snow crystals stung his face as he walked. His rubber boots squeaked in the snow, and each step made an eerie flapping sound like something or someone following close behind him. Junior turned quickly around but saw only the barn and his own tracks in the snow. He continued on his way, the old willow tree over to one side of their yard catching his attention as its ice-covered branches, snapped and crackled with every swaying movement caused by the wind. Junior passed by this ancient willow to the house, opened its front porch door, stepped in quickly and turned again to look back toward the barn, nothing there but wind rattling the willow, and snow blowing over his tracks. A sigh of relief, Junior shut the door, shook snow from his coat and hat, then hung them up. He walked to the cast iron wood stove which was crackling hot, kicked off his boots and leaned over its surface to warm his face and hands. Grandma was over at the sink washing up the last of their supper dishes. She looked over at Junior with a tired smile and asked," Did you remember to lock the big barn door, and push the hay to the cows?" He looked up at her, then back down at the stove top and replied," Yes of course." Grandma dried her hands and asked," Do I have to go and check? Because yesterday you left the door open all night!" Junior rolled his eyes, slipped on his boots, coat and hat, began to grumble softly as he headed for the door. Grandma yelled out," While you're out there, brace the chicken coop door so it won't blow open." ‘’Yeah okay," Junior replied kicking at snow while slamming the door behind him. Grandma watched from a kitchen window as Junior made his way to the barn. The front barn door opened with a bang as the wind tore it from his hands. Junior pulled hard against blowing winds grasp and closed the door behind him. Inside the barn, it was warm from the combined body heat of all the cows. He felt his way in darkness, found the switch panel and turned on a column of lights. Air in the barn had a hazy thin cloud of vapor from all the cows' breath, and this humid mist felt warm on his face. Down center aisle of the barn, he could see the back door was, in fact, open, and nights darkness made the entrance look like a black hole, opening and closing as the door swung freely in winter’s cold wind. As Junior got in front of the entrance, he stared out into winter's black night, and from the swamp below their cow yard hill, came a long low howl through the wind. But before the call finished, that big heavy wood door crashed shut, causing Junior to jump back in stunned fear.

This book tells the true life story of Don's adventures within nature’s wild, realms in the spirit world, and of mysterious unknown cryptids among forest or mind. Read Don's complete unaltered and detailed memoirs about his own encounters with many hair-raising supernatural events or cryptids during his life. Many of the memoirs, pictures or details have never been made public before, until now in this book. This publication also covers many of the more famous discoveries Don has made, such as Big Phil, Blinky, the 1st Thermal and Baby Bigfoot, with pictures and details to summarize his lifetime’s research on the trail of the Sasquatch.

Since childhood, Don Young has had visions and dreams that could only be explained as supernatural insight. Trained by an old Iroquois Shaman in the arts of natural native medicine and sacred spirits, Don spent several years since the age 9 under this elder Natives guidance, till finally he himself was a graduate Mide Shaman. Don's life has been filled with adventure, but along this mysterious path came many hardships that carved him into the person he is today and opened his heart to appreciate rare gifts of happiness often clouded behind emotional walls.