The Keeper of Families 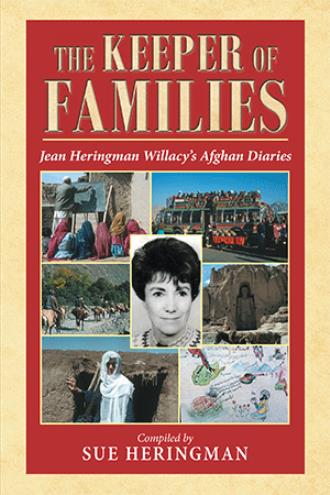 "I have a lifetime of memories and experiences during my years in Afghanistan and would deeply love seeing something rewarding from those days.

Intrepid American traveller and photographer, Jean Heringman Willacy is crossing the Hindu Kush Mountains when she falls in love with Afghanistan and begins a completely new life. She is almost fifty years old.

The Keeper of Families is Jean's historical yet timely memoir from before and after the Soviet invasion of Afghanistan. Her remarkable Afghan legacy is woven into a single, compelling narrative from diaries, letters, eye-witness accounts, and rare recordings of interviews and on-the-street encounters.

With a handshake, Jean goes into business with Afghan merchant Azad to export the then trendy, sheepskin 'hippy coats'. She ensures that her fashion company provides Afghan widows with embroidery work. Over Persian lambswool, she meets English fur trader Henry Willacy who becomes her life partner.

It is 1967, a colourful and seemingly carefree time when girls wear mini-skirts and Kabul is known as the 'Paris of Central Asia'. Jean captures her adventures -and misadventures- with the thrill of discovering her new country, its people and their culture.

Unaware of growing political unrest, Jean is visiting at the home of Afghan friends when they are pinned down during the ruthless communist coup.
“At about 5 a.m....there is a very big explosion...we see more tanks on the move...further up the street, the palace is on fire. We are right in the line of the bombing and strafing by the planes. It is the longest day imaginable.”

At the tragic onset of the ensuing Soviet-Afghan War, Jean is by now 60 years old. Compassion and indignation override concerns about her age and compel her to go into the refugee camps in Pakistan and those countries granting asylum determined to help those fleeing for their lives.
“To be a refugee, more than losing your rights, more than losing your country, you lose the right to choose your way of life.” -Dr Ghulam

For the next two decades, using her own resources and ingenuity, Jean battles bureaucrats from Peshawar to Washington and befriends an ever-growing number of Afghan refugees -their 'Keeper of Families'- joined in a mutual struggle to overcome the ravages of war and rebuild their lives with dignity.

In Jean's words, “Their stories must be told to show the world that it is not merely enough to have escaped tyranny and oppression.” Stories like those of outspoken midwife Habiba who wants to write a book, Dr Ghulam facing deportation, or schoolteacher Soroya caught in the clash of cultures. Far from being a 'Western saviour', can Jean make a difference?

The book features a selection of Jean's photographs and war-time drawings by Afghan refugee children.

It proudly bears the endorsement of the late, internationally acclaimed historian Nancy Hatch Dupree, known as the 'Grandmother of Afghanistan.'
“The Keeper of Families is a notable addition to the study of displacement...New Jean-type reporting is needed.”

As, one refugee crisis follows another, The Keeper of Families remains a relevant and need-to-read book. Hopefully, Jean and her adoptive Afghan family can continue to inspire and, now more than ever, reaffirm our common bond of humanity.

Sue Heringman, the third daughter of Jean Heringman Willacy, was Director of the Instituto de Inglés and the Adult Education Program at the University of Southern California in Madrid. A Spanish-English teacher and translator, her literary translations include works by well-known contemporary Spanish authors and the great Chilean poet Pablo Neruda.

The compiling and transcribing of her mother's testimony is the dedicated work of many years. Heringman currently resides in Dorset, England, close to where Jean Heringman Willacy lived during the events described in this book.