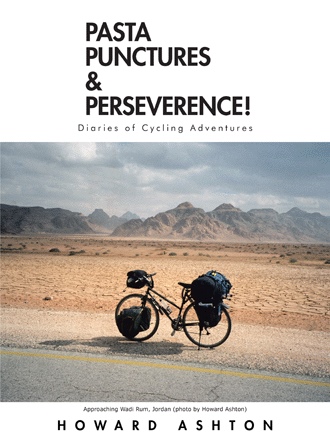 Why cycle fast when you can cycle slowly, (often very slowly, as dictated by terrain, topography and the weather). Intrepid explorer W.H.Tilman saw the merits of such an attitude when he remarked that “all travel is dull exactly in proportion to its rapidity”. Howard adopted Tilman’s attitude as he adventured, over many years, across the world on two self-propelled wheels, that incredibly efficient machine for personal transport - a bicycle! Born affected by cerebral palsy, it was through the therapeutic effects of much massage and manipulations of his limbs that, by the age of 3, his legs had enough strength to push pedals, if not allowing him to stand and walk! And pushing pedals is what he has been doing almost daily for the past 65 years! From trundling down the garden path on a bright red ‘Gresham Flyer’ trike, his competence and confidence quickly built, as did muscle strength and tone. This simple activity allowed him to overcome the physical limitations which life had imposed upon him. Since those very early days, countless bicycles have carried him tens of thousands of miles. Very short journeys, just down the road to primary school,were gradually extended over the following decades. Pedal power became Howard’s passport to personal freedom. Almost always solo, and camping wild, the range and magnitude of these cycling adventures inexorably expanded, from roaming both Scottish and Irish by-ways, to the high roads (but mostly) back roads of more than sixty countries across the world. Here he shares a selection of the diaries written ‘along the way’, recounting the experiences and interactions which are the, seemingly inevitable, consequence of this ‘slowly and lowly’ method of travel. Proceeds from the sale of this book will be donated to SCOPE, the UK charity supporting those affected by cerebral palsy and their families.