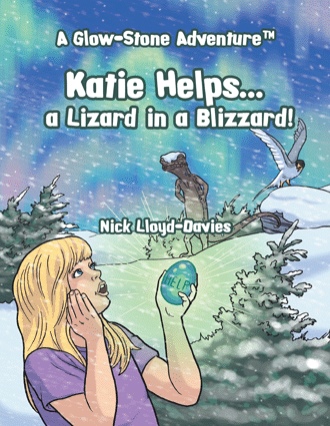 Katie was bored. It was the Easter holidays. Mummy and daddy were 'BUSY'. In fact, they always said they were ‘BUSY’ but never seemed to be doing anything other than looking at their iPads, laptops or phones. Surely parents had to entertain their kids in the holidays? Her brother Ben wasn’t much help either. He was either playing football in the garden or organizing football cards, both seemingly mindless activities. Her glow-stone hadn’t done anything for a whole week! She’d looked at it at constantly before and after school last week and it still just said ‘HOME’. She wondered if it was broken. Maybe she was going mad? Ben has said as much when she told him about her last adventure and now, to Katie’s great annoyance, he kept pulling crazy-person faces and doing baboon impressions whenever he saw her. She tried rubbing the glow-stone harder. Nothing. Perhaps blowing on it. No change. Cleaning it under the tap? Well, she managed to shine it up a bit. It wasn’t until Easter Sunday, when she was lying in bed finishing her 5th chocolate egg and planning her evening’s TV viewing, when, at long last, it happened. You remember what happens to the glow-stone don’t you? First, it vibrates, vigorously! It was on her desk and for a moment she assumed it was one of her friends messaging her. Next, the green glow started. Katie got a thrill of excitement, mixed with a little twinge of nervousness, as she realized a new adventure was starting! Katie picked up the glow-stone and read the top of it. 'HELP' it said, just like last time. She rubbed the word with her forefinger and her room filled again with an ever-increasing glow of green, so bright that she had to shut her eyes. The green light seemed to go through her eyelids, it was so bright. For a second, she thought the whole street must see the light from her room and wondered what on earth they would be thinking. But before she could ponder this anymore, she fell flat on her back! 'Whoaaa!' exclaimed Katie. She felt herself sliding around and why was her backside all wet? 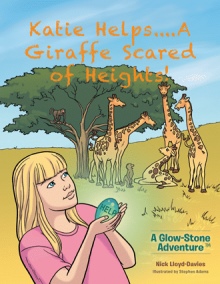 Katie’s second Glow-Stone adventure! A bad-mannered lizard has been dumped in the Arctic, and Katie is sent to find out why and what on earth to do with him! Who would dump a little lizard in the Arctic? And why? Katie soon realises that this little lizard is being punished; she has to find a solution before they are both frozen! Look out for Katie’s next Glow-Stone Adventure: Katie Helps . . . a Bear with Bad Hair!

Nick Lloyd-Davies lives in Surrey, England, with his wife, Amanda; two children, Calypso and Oscar; and two cats, Fluff and Cookie. He has made up so many adventure stories at Calypso and Oscar's bedtime, he figured it was about time other children got to hear them too. Nick works by day as a town planner and by night (or on the way to work!) as a childrens' author!