One Night and One Day 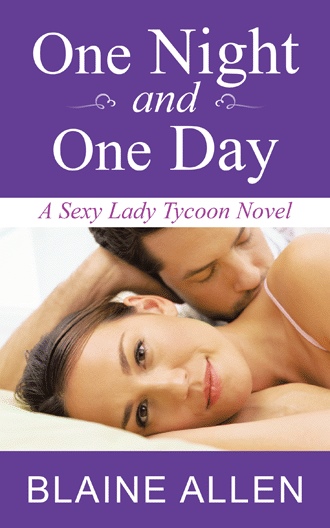 As they walked out of the pub Jason had his hand on the small of her back again sending chills up her spine, but her body seemed to settle and rejoice like it craved his touch. He opened the door for her, and grabbed her hand out on the sidewalk like he really needed the contact with her. “It's this way,” he said as he nodded to the right and he turned her that way. She thought, God he's pushy. But she didn't object once to either the hand at her back or to his big warm hand surrounding hers. Mari decided she wouldn't retreat from whatever had grown so swiftly between them. What a difference a couple hours makes, she thought ruefully. Without conscious thought or design the evening had started to feel like a date. By the time they arrived she'd become aroused from his constant touch and her erotic thoughts of what she hoped would happen in a very short while. Mari's nerves were on edge, her skin was tingling, and she was getting warm and flushed all over in anticipation. Wetness had gathered between her legs, and she was afraid he would smell the feminine scent of her arousal. “How did you find this place?” “It found me. I came in to get a heel put back on a shoe, and the old geezer downstairs, who talks with a heavy German accent, had a small sign behind the counter. I'll be sorry to leave here, it's been private and great for the last two years.” Jason unlocked the door at the top of the stairs, then went into the darkness first a few feet to turn on a table lamp. She noticed the room was stacked neatly with surprisingly few boxes ready to move, nothing like the disarray at Mari's place. Jason knew he liked her, but more, he wanted her with a sudden compulsion that he hadn't felt before with anyone else and surprised him. Jason prowled back to her where she stood just inside the door looking around, but suddenly Mari was very aware of where Jason was. He stepped past her, close, and closed and locked the door. The instant he turned he had her in his arms. “Mari, I want you to stay the night here with me.” She could see the gleam in his eyes that promised a night full of pleasure, for both of them. “I want to stay with you too,” she replied honestly. “Kiss me,” he said, to be sure she was willing to stay with him, and not because he was pushing her to fast. As the evening had progressed, the thought had occurred to Mari that there was a possibility that they would end the evening in bed together. Her feelings for this man had risen quickly. She couldn't explain her undeniable attraction, but she knew there would be no distance between them tonight. They'd celebrate in each other, and maybe make the world feel new and better. She wanted him to transport her to another world before reality returned tomorrow. Mari smiled and looped her arms around his neck, holding herself tighter against his body so her breasts were mashed against his chest and where she could feel the pressure of his firm erection against her stomach, and she pressed her lips to his. Jason took charge of the kiss but Mari eagerly met him kiss for kiss. He tilted his head at a better angle and deepened the kiss even more. At the pressure of his tongue against her lips, she opened her mouth to welcome him inside, and the heated kiss became incendiary. Mari didn't expect to get kissed this weekend. Well, maybe a congratulatory kiss from her family, but nothing like this. This was absolutely wonderful, and she dove right back into it. She'd never been kissed like this...with a never ending, all encompassing, addicting, and deep feeling kiss. Jason kissed like his life depended on having his lips on hers, his tongue tangling with hers, as he crushed her body to his. She recognized that the whole two hours at Moe's had been a natural occurring foreplay between two open and willing parties, but she hadn't had a clue at the time. Her breasts felt heavy and swollen and her bra was too tight. All her clothes were suddenly too constricting, and she could feel even more moisture gather between her legs. The hot kiss led to more. The temperature today had been in the 80's, so Mari was wearing white shorts that ended 6” above her knees, and a blue and white striped tank top. The straps of her satiny pink bra were showing on her shoulders, and there were glimpses of pink satin under her arms and at the top of her tank top, and her bra was partially visible through the white stripes of the fabric. Jason reached down and grasped the hem of the tank top in each hand and pulled it up. Mari reflexively raised her hands above her head so he could pull it all the way off. He took the top and flipped it onto one broad shoulder. Then Jason reached down to unbutton and unzip her shorts, and knelt in front of her to pull them down over her legs until they were resting on her feet. Again Mari lifted her feet so she could kick off the sturdy brown sandals she'd worn for the mile walk to Moe's. Jason pulled off her shorts, and they too ended up on his shoulder. Mari gave a surprised squeal when Jason easily picked her up and carried her into his bedroom. He put her down next to the bed, and quickly grabbed the pile of folded clothing he had on the bed for packing and deposited it on the floor under the front window. He stood in front of her and said, “Show me all of your body, Mari.”

Two college graduates, Marianne Dumont and Jason Camron, had a chance meeting on the evening after their graduation ceremony, when he pretended to be her boyfriend to get her out of a jam. They had a spontaneous attraction to each other and hooked up for just one night and one day for hours of steamy marathon sex before reality interfered and they moved on to the rest of their lives. The pair met again very unexpectedly a decade later when their lives have changed drastically. The handsome man is a past warrior with secrets who has just decided to end his vagabond travels and start over, and she’s a beautiful, successful, and established businesswoman now who has changed her name. However, even after all that time had passed, they discovered that certain crucial things have stayed exactly the same. The memories of their first intense interlude have remained, and they still want each other desperately. But is it just lust, or is it more? Will their reunion be merely a sexy repeat of only one night and one day in bed together, or will their relationship become more this time and involve their hearts too?

Blaine Allen began writing romance novels after his wife tragically lost her battle with brain cancer. He had always been an avid reader and frequently had plots running through his mind; however, he never intended to write. Then one story idea was stuck in his head for two weeks, so he decided to write it down to excise it. However, writing became much more than that. That idea became his first book, and now he’s writing book number nine, with the next book started and notes complete enough to write the story after that. In fact, he has plots, titles, and notes on dozens more possible story lines for the future. Blaine writes the same kind of stories that he enjoys reading, steamy hot and sexy ones with a handsome hero and beautiful heroine who have adventures along the way and, of course, a happy ending. He started writing just for his own enjoyment and satisfaction, but it has become Blaine’s pastime and hobby. Even the necessary research is fun. However, when he mentioned to people that he was writing now, they asked the standard question, “Are you going to publish your books?” This sexy romp novel is his first foray into publishing. Blaine lived most of his life forty miles west of Chicago but now makes his home in the Illinois Quad Cities, only a mile from the Mississippi River. After four years in the US Navy on aircraft carriers in the Atlantic Fleet and two college degrees, most of his career was in logistics and supply-chain management. When he isn’t writing, he’s reading, walking or biking along the river, or doing something fun with his two grown children and their families. He always has his voice recorder with him to capture new thoughts and ideas for future books.