Why the SUN Rises

The Faces and Stories of Women in Education 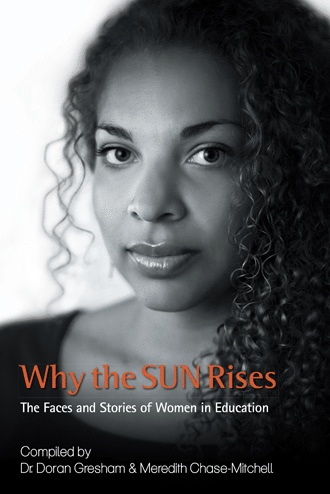 Preface My 3rd grade teacher, Ms. Collins, was the coolest shade of brown and she had a smile that could make the sun flicker. I can still recall wanting to sing Larry Graham’s “One in a Million You” in the grade level talent show that she sponsored. If you are familiar with this song, you will note that the melody was handcrafted for a bona fide baritone and not an 8-year-old child, but Ms. Collins never left me deterred. Leading up to the performance I was much too shy to sing out loud at home, so I would bundle towels together and use them to muffle the sound of me wailing about the kind of love that stands the test of time. I repeated this routine until I could proficiently belt out each verse. The day of the show, I sang my heart out while Ms. Collins and her close friend Ms. Kerkorian lingered near the door. Even at the age of 8 I knew that someone was proud of me. And that’s what great teachers do. They build you up until it’s time for you to sing your song. In the spring of 2012, I approached Meredith Chase-Mitchell, who is a former graduate student from The George Washington University, with the idea of writing a book about women in education. You see, Mere and I are both career special educators and the students that we most often come in contact with are adolescent males. However, our colleagues who we routinely share stories with are far more often women. This means that for years we have heard fascinating classroom tales and non-school related anecdotes from the very same teaching force that has been tasked with restoring hope in American schools as they equip a new generation of leaders. We have edited and compiled these essays and interviews because we are heavily invested and highly interested in what makes the American education system work or falter. Why does the wide-eyed white teacher want to teach Black boys with special needs? Who inspires you to stand in front of a classroom and serve as the instructional leader for 8 hours each day? Why do you come back to such a tough job when you could easily walk away? These are the types of questions that were asked and answered with candor throughout the duration of this project. It goes without saying that the road leading to this humbling yet joyous point was not paved for us with bars of gold outlining the best routes to take. In fact, I don't think either of us realized the immensity of the task we would accept and how much our lives would be changed by this effort. This project has taken 3 years to prepare as we have searched for educators with unique stories to tell across the United States and abroad. And no matter what you do with the time, so much can happen within the span of a few years. Business partners have come and gone, my wife and I ushered our second child into this world, god children have gone away to college, a house was built and relatives were laid to rest. And through it all, we continued to drive back and forth to Brooklyn, NY, to meet with educators and host photo shoots up and down the east coast. Finally, with the help of our primary photographer Vaughn Browne and a host of other talented individuals, we have realized our goal of shining light into some unfamiliar places. In exit interviews following each photo session, teachers were asked why they came to this profession. It quickly became quite clear that most of our colleagues wanted to become agents of change. Conversely, when questioned about what it would take for them to leave the profession, teachers told us that they would undoubtedly seek out a new profession if they were no longer able to make a difference in the lives of their students. Another theme, which emerged from the stories of teachers within the text, is the role that the past has in shaping the future. Almost every educator noted that the impetus for their decision to teach or work with children was tethered to someone who cared for them in the past. And so; essentially, these are the stories of those who were once inspired by teachers. Walk with us if a teacher has ever motivated you or if you are in fact a teacher who needs inspiration. Dr. Doran Gresham

Why the Sun Rises was created in an effort to showcase the faces and stories of women in education. This collection of essays and interviews was compiled and edited from 2012 to 2015 and explores the resilience of educators across the United States.

Dr. Doran Gresham is a career educator with over twenty years of experience as a special educator, grassroots worker, mentor, and school administrator. He is an adjunct professor at La Salle University and the College of New Jersey, where he teaches graduate courses in Universal Design for Learning and Differentiated Instruction. Doran is also a sixth-year master educator with DC public schools, where he helps to evaluate and support teachers throughout the district. Outside the classroom, Doran has worked with the DC Teaching Fellows Program as the secondary special education project director, and he also served as the director of instruction for CaseNEX, a professional development firm. As a founding board member of Achievement Preparatory Academy Public Charter School, Doran was the chairman of the academic performance and accountability committee, and he was a member of the governance committee. In 2004, 100 Black Men of Greater Washington, DC, honored Doran as the Elliott Hair Man of the Year, and in 2008, he was a Mentoring Organization of the Year finalist for his work with Guerilla Arts Ink & 100 Black Men Inc. Doran completed his doctoral studies in special education and emotional disturbance at the George Washington University, where he was a Holmes scholar and a member of Phi Delta Kappa. His dissertation research focused on general educators' perceptions of the overrepresentation of elementary-aged black males in classrooms for students with emotional disturbance. He also holds a Bachelor of Arts degree in English from the University of Virginia and a master’s degree in emotional disturbance and learning disabilities, K-12, from the College of William and Mary. Doran and his lovely wife, Colette, live in Upper Marlboro, Maryland, with their two beautiful and bright daughters, Madison, six, and Nina, three.