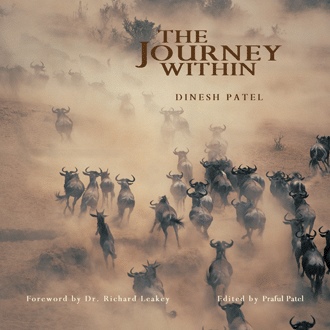 This book represents one photographer’s effort to share his personal perspective of Africa’s wildlife heritage. Drawing on his vast collection of photographs from hundreds of safaris in Eastern Africa over the past five decades, Dinesh Patel has successfully made the African safari universally accessible. What distinguishes the book from the myriad others are two striking features. First, is its simplicity and purity—the wildlife photography in the book is uncomplicated and pure, capturing snapshots of the wild as it is intended to be, devoid of human factors. Second, building on this simplicity, unfettered with commentary, the photographer has successfully created a world that gives the reader an experience of being there, accompanying the photographer as he moves on his journey. Whether these photographs are viewed with awe or admired for their majesty, they convey an important message. The African wilderness is in rapid retreat. Too many of the creatures exhibited here are on the lamentable list of endangered species and face a bleak future. So the challenge ahead is serious and the task difficult but essential. Africa needs a future that befits its unique place in the grandeur of nature. By nurturing these natural jewels and by playing to its strengths—its unique and spectacular wild legacy—Africa must become prosperous by preserving its heritage. It is the essential duty of the wildlife photographer to spread this message by conveying the spectacle and magnificence of Africa’s wild wonders. Dinesh Patel has accomplished this task with distinction.

About Dinesh Patel (Photographer) Dinesh Patel, born in Nairobi on 21 February 1940, caught the safari bug very early in his life and from the outset; he realized that he must capture for posterity the images of the drama and magnificence of wildlife that he was privileged to witness. Starting with a Kodak box camera, he taught himself the art of shooting wildlife with a lens and soon became an accomplished photographer constantly in pursuit of that evasive perfect shot. He graduated to a Hasselblad in the midseventies and became famous as a wildlife photographer. Over the past five decades he has skillfully matched his innate knowledge and love for the bush with superb skill and sensitivity as a photographer. He has amassed an impressive and diverse collection of photographs, each one of which has been the result of hours, days, and even weeks of perseverance. Dinesh’s photography bears testimony to his preoccupation with conservation. This sensitivity, gained from safaris to virtually every wildlife park in East Africa, fueled a sincere desire to convey by camera the assets which mean so much to the future of the region and the world at large. Although unpublished until this book, his work has been widely exhibited not only in Kenya but also globally. An appointed honorary game warden of the Kenya Wildlife Service, Dinesh is one of the few photographers to also cultivate a knowledge and profound respect for the peoples of his country. In The Journey Within, Dinesh’s talent and lifetime experience as a wildlife photographer are harnessed to give the reader a safari experience close to the real thing alongside the photographer as he passes in a panorama of landscapes and wildlife of Eastern Africa. This vision of Dinesh is what makes his first book unique: his sincere attempt to share the thrill of an East African safari through his pure and simple photography. He would like readers to write their own captions and commentary as they take the journey. As a true crusader of wildlife conservation, Dinesh has dedicated the book to the cause of conserving wildlife, nature’s wonderful gift to humans. African wildlife is facing increasing threats. Many of the species in this book are on the endangered list. Providing support to ongoing conservation efforts has never been more urgent and every bit counts, no matter how small. This book represents Dinesh’s humble effort, which in time he hopes, will inspire and attract new recruits to the cause. The release of this second edition also marks the “passing of the baton” to the next generation. Dinesh’s sons, Teeku and Teenu, have adeptly taken over the family business and continue to spread the conservation message through photography, customized safaris, research, and publication. Dinesh lives in the Kitisuru suburb of Nairobi with his wife and one of his sons. About Praful Patel (Editor) Praful Patel first met Dinesh in 1966 soon after arriving in Kenya from Kampala, Uganda, to study at the University of Nairobi. Within a week, he was on the road with Dinesh for what would be the first of scores of safaris over the next fifty years, witnessing many of the scenes photographed in this book. From the outset, Dinesh harbored a strong desire to share his safari experiences with others. When asked what his last wish would be, he always answered: I would like to take someone who has never been on an African safari to experience one with me. Because of his failing health, he can no longer go on safari. This book is a wonderful alternative to joining him in his Land Cruiser. Praful led the team that published the first edition of this book in 2009. His long association and safari experience with Dinesh was essential in translating the photographer's vision into “The Journey Within.” Praful continued close participation in the project, including attending all of the book launches and promotional events. The realization of this second edition, which incorporates some improvements while retaining the spirit and essence of the original, is again being spearheaded by Praful. When not on safari with Dinesh, Praful worked at the World Bank based in Washington, DC, in a career spanning thirty-five years. During his time at the World Bank, one of his early responsibilities included overseeing conservation projects focused on protection and management of national parks in Kenya and Tanzania. One constant throughout his life has been a passion for safaris, wildlife, and conservation. He continues his close involvement in conservation, serving as an advisor to Vanishing Herds Foundation, an India-based NGO dedicated to conserving the Asiatic Lion, and supporting conservation NGOs in Kenya. Praful lives with his wife, Anjana, in Washington, DC, USA, and still manages to go on safari whenever he can.