Book One of the Dragonspawn Trilogy 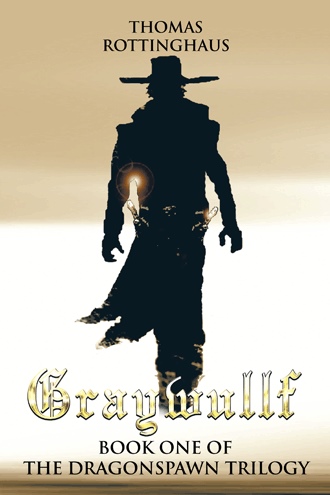 The ritual he intended to complete had certain requirements, and one of those was that the kill must be fresh, and it had to be completed by the light of the moon. Kill too soon and it would all be wasted. But he had waited for so long for this moment he had to force himself to be patient. A giddy excitement overtook him, and he felt a stirring of physical arousal. He heard the man in gray long before he could possibly have been that close. The ice canyon played tricks with the sound and Lynch became more agitated by the minute. His eerie gray eyes darted from side to side and his breath came in short, silent gasps. Finally he could take it no more. He darted back around the corner, his sword held at the ready. And he nearly dropped it in surprise. Two small children skipped along the bottom of the chasm, hand in hand, laughing as they came. Their eyes were bright and full of life and their cheeks were rosy from laughter. Lynch was astounded. The children drew even with him, and their eyes turned a fiery red and their rosy cheeks elongated into narrow snouts lined with sharp teeth. They lunged for him as he fell backwards, his legs flailing against their thrashing bodies. He slammed into the wall of the ice chasm and needles of pain shot up from his thighs as they chewed through his breeches. Razor sharp, sparkling white teeth ground into the flesh of his thighs and chewed upwards towards his balls. He threw a desperate punch into the side of the nearest one’s head, and as it fell he slashed his sword across the second one’s throat. Warm blood sprayed up his forearm and, for a moment, the child’s face returned. But these creatures didn’t know who they were dealing with. Lynch drew his blade back and skewered the second without a moment’s hesitation as it, too, turned back into a childlike being. He grunted as he rose to his feet, anger blazing through him as he saw his tattered leggings with his own blood seeping through them. The children’s bodies shimmered against the glaze of ice then began to shrink. In moments two field mice scampered between his legs as Lynch stared. Suddenly, his head was forced back from the sudden pressure of an icy cold blade. Lynch dropped his own sword and coolly regarded the man who held his life in his hands. The man in gray’s mouth was rimmed with red, and a tiny rivulet of blood seeped down the whiskers on his chin to drip silently onto the pristine ice. His eyes burned with single minded intensity, and just a touch of madness. “Gotcha,” he said hoarsely.

The Dark Wizard Lynch had lived several ages of men being loyal only to himself. But when he was accidentally rescued from certain death by the Warrior Lorn Graywullf, he found himself in the unfamiliar position of being indebted to another. To repay that debt, Lynch offers to help the Warriors reverse a spell that would wreak havoc on their World. Of course, he neglected to mention that action would serve his own interests as well. In the process, Lynch discovers much to his chagrin that he does still have a soul and a conscience. He also discovers that the Warriors are fighting a battle they can’t win against a common enemy, a Wizard named Timon Backhelm. Only Lynch knows his complicated history with Timon, and the real reason he has sworn to kill him or be killed trying. But when Lynch realizes the extent of Timon’s power, he knows the only way to win is to initiate the creation of the Dragonspawn, a magical, physical blend of the strengths of a Dragon and an ultimate Warrior. The question is, will the Dragonspawn be loyal to those who created him, or will he simply destroy them all?

Thomas Rottinghaus has been an avid reader of fantasy and science fiction, as well as a student of the written Word, since becoming enamored with J. R. R. Tolkien's "The Hobbit" as a freshman in high school. Drawing from influences as varied as Tolkien, Stephen King, and Isaac Asimov, he wrote his first foray into the publishing world, "Graywullf: Book One of the Dragonspawn Trilogy." Thomas studied literature and journalism at Colorado Mesa University before pursuing other interests. He resides in beautiful Western Colorado with his wife, Lisa, a herd of barn cats and their friend Scout, a shepherd and Labrador mix.