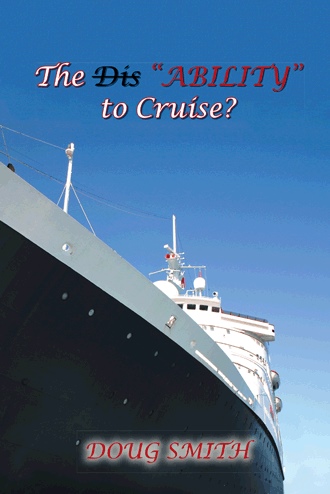 Do you have a disability? Would you like to go on a cruise holiday but you think cruise ships are totally inaccessible? The author himself a full-time wheelchair user, uses his vast knowledge and experience of the cruise industry to give you all the relevant information you will need to decide whether or not a cruise holiday is right for you, whether you have a disability or not. He takes you on a journey from initially booking the cruise through arriving at the cruise terminal and boarding your cruise ship to what happens on board as well. He finally goes through the final disembarkation process so that you should have no issues when you finally get back home. Now, as Doug himself would say, “Go on! Get out there! Enjoy the world! After all, it is your world!”

I was born to Scottish parents (my mother, Sheila, and my father, Bill) in Newfoundland, Canada, where my (now-late) father was a pilot. I have one older brother, Bill, who is married to my sister-in-law, Doreen, and together they have two lovely daughters, my beautiful nieces Sara and Leanne.

I was born with spina bifida and hydrocephalus. When I was born, my consultant told my parents that I would only live a very short time. How short? Between three and six months. Hah! I fooled ’em! After almost five decades, guess what? Yep, I am still here! And I am not going anywhere. Unless it is on a cruise ship, of course!

However, I am truly grateful to my mother and father for bringing me back to Scotland and to the medical staff (surgeons, anesthetists, doctors, and nurses) at Aberdeen Royal Infirmary. It is with thanks to their expertise and care that almost five decades later I am still here today.

Back in 2006, I was in a bad place. I had no job, no money, and no prospects. I decided to go back to college, not just to better myself but also to better my self-esteem, my qualifications, and my prospects of getting a job. I studied for an HNC (Higher National Certificate) in travel and tourism at Aberdeen College in the northeast of Scotland.

After completing my HNC in 2007, I was very fortunate that I had the opportunity to work in the cruise industry. I worked for a major cruise company as a reservations cruise consultant. This sounds posh and exciting. It definitely is not posh, but it can be very exciting. It involved selling cruise holidays for some fantastic cruise lines to travel agents and the general public alike. I also conducted cruise ship tours for groups of able-bodied guests, as well as those with disabilities, showing them around some of the magnificent ships when they were in port.