Tacking on the Styx

An epileptic sails the facts, fiction and philosophy of a mental illness 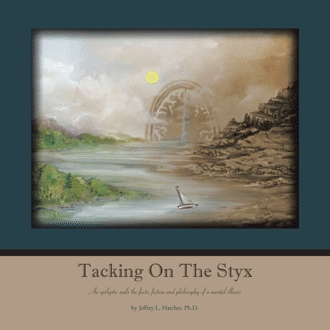 As only a patient can, the author brings the social, cognitive, and physical trials of epilepsy to the reader, braiding medical essays with a fictional adventure.

In Tacking on the Styx, Jeffrey Hatcher, Ph.D., interprets the cognitive, social, emotional, and medical challenges of living with epilepsy from a patient’s perspective. Using experiences suffered during graduate studies completed at Columbia University, he illustrates life with epilepsy using a fictional patient’s emotional struggles with seizure control, surgical evaluations, and professional and romantic relationships. Into this drama, he weaves essays concerning the neurology of epilepsy and its influence on behavior in addition to the stresses of badly compromised memory. He guides the minds of professionals and family members to the disease’s fascinating aspects for a passage into its cognitive difficulties. Hatcher also illustrates experiences of seizures in terms of the emergence of thought itself. To do so, he explores models of thought via artificial neural networks and entropy dynamics in a manner accessible to lay readers. Artistic examples of emergence of thought overlaid upon a cognitive model help readers visualize the experience of seizures. He then moves to emotional thought, reporting how emotional deficits caused by surgery can be found using music. He relates how intense spatial memory difficulties elevate stress and fear, feeding back into an increase in seizure activity. He challenges professionals to reflect on the negative effects of omitting epilepsy as a mental illness upon a patient’s professional, social, and home life. Obtaining reasonable accommodation at work and school becomes difficult without appreciating the disease as such. Life circumstances can lead a sufferer into bouts of rage, depression and attempts of suicide. The book beckons medical students, in particular, to consider treatment that includes more psychology and education. Treating epilepsy ideally entails more than simply stopping seizures. Tacking on the Styx offers a first-person view into a horrible disease and offers uncommon advice to doctors and families seeking to cope with it.