A Story of Perseverance, Inspiration and Hope 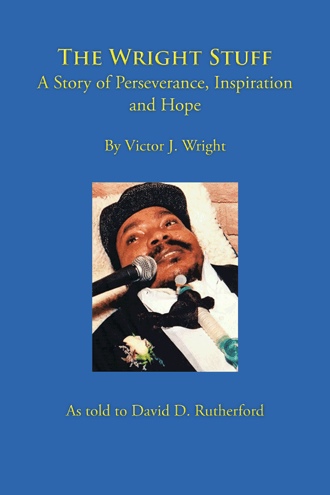 When my friend and former classmate David Rutherford told me he wanted to write my autobiography, I was thrilled. This was a guy whose mother was the first African-American public librarian in the San Gabriel Valley. He went on to become a reporter for the L.A. Daily News. Most importantly, he’s one friend who has been there for me throughout my life. He knew me in elementary school, before I got injured. He organized numerous fundraisers for me, both during and after high school and he organized a huge event for me at our high school just to show me there were still a lot of people out there who remembered me and still cared.

When he sat down with me for the first of a series of interviews, David asked me to constantly have in mind the purpose for telling my story. I guess the real purpose for telling my story is that someone else wanted to know it. Also, sharing my life experiences might help others keep the faith and deal with their own adversity. The only other reason I could think of was that it needed to be told. But I don’t think I should be the judge of that.

I realize that mine is a unique situation: spinal injuries affect 273,000 Americans (12,000 new cases per year) and the leading cause of death is renal failure, according to the National Spinal Cord Injury Statistical Center. The biggest advantage I had of beating the longevity odds was my age: I was only 15 at the time I broke my neck playing football, so I was strong and healthy.

Another fortunate circumstance working for me was my family. My mother Dorothy has made it her life’s calling to make sure that I had everything she could provide for me. Over the last four decades, we have given each other a great deal of trust: I needed to trust her in giving me life’s basic necessities that I was so dependent on others giving me; and she trusted me that I would have the physical, mental emotional and spiritual strength to carry on each day.

There was no 911 emergency phone service back in 1976. No magnetic resonance imaging devices to view spinal injuries from various angles simultaneously. We didn’t have a lot of the technological advances that we have today. What we did have was caring people who saw the human element associated with chronic injuries. I suppose that’s one thing that has allowed me to survive.

Another factor was faith: in God, my family, my friends – and faith in myself. My undying spirit and will to live has been fueled by all of these.

There are more people than I can dedicate to this small section included in this center of influence but there is a core of people within that inner-circle that I would be remiss without mentioning: Of course, there is my mother, who has been there for me since the beginning. Then there are my brothers Milton, Dexter, Myron and Joe; my sisters Deb, Tobytha, Rebecca and Cheryl; my high school teacher Bob Jones (who passed away a few years after my high school graduation); my long-time classmate and friend David Rutherford, who organized fundraisers and special events for me and helped me with this book; and John Dhanaraj of Family of Friends International, the non-profit charity he helped me establish. He and I are co-founders but he had the vision. He, Tony Rosica, Tom Smith and I were the founding board members. I also want to recognize my home teachers, Vernon and Sylvia Jones. Mr. Jones was a staff member at the Jet Propulsion Laboratory and his late wife Sylvia was a member of the John Muir High faculty, who taught me English, reading composition and African-American history. Together, they helped me graduate.

Robert Crimi and his wife Betty helped me begin learning about Christianity. I’ve known them since I was five years old. They were my first Sunday school teachers at Second Adventist Church in Pasadena.

I thought I had always been closest to my mom and my oldest brother Milton but when this happened, Dexter became a nurse so he could help me. Milton was going to Loma Linda to be a doctor. Now he does construction. I think it affected him. Instead of being around helping, he’s not around that much but we were the closest. But Dexter was the one that ended up stepping up and being a nurse. He wanted to be a minister but changed his vocation and became a nurse so he could help tend to me. He started working at convalescent hospitals on Fair Oaks Avenue, as a dish washer, along with Robin Sebastian. Deborah followed suit. Joe worked at the Dutch Oven Bakery on Lake Avenue throughout his high school days. He’s still a baker, having worked at Vons for over 25 years. He also got his nurse’s aide certification in high school and worked at Arcadia Methodist Hospital, where Dexter currently works He also worked at St. Luke Hospital until it closed around 2000.

I consider all these people, as well as other teachers, classmates and teammates, people who played tremendous roles in my life, as I will disclose throughout the book.

Young and healthy, Victor J. Wright was only fifteen years old in 1976 when he broke his neck playing football at John Muir High School in Pasadena, California. He had severed the vertebrae at the second level, right under his brain. Many suffering this injury would have died, but Wright survived. In The Wright Stuff, author David D. Rutherford, Wright’s former classmate, friend, and former newspaper reporter, tells Wright’s story—from his birth, through his injury and hospitalization, and beyond. This biography narrates how Wright was one of the first quadriplegics to earn a college degree and how he cofounded a nonprofit organization that provides relief efforts to victims of natural disasters around the world. It shares how Wright donates books and audiovisual materials to local libraries and has inspired numerous squads from his high school alma mater to victory. In 2013, he was ordained a minister by the Association of Fundamental Ministers and Churches. Though Wright has experienced a host of challenges throughout the years, he credits his faith in God and the loving care of his family and closest friends for being allowed to live the past four decades in a way that has inspired thousands and has made him a community treasure.

David D. Rutherford earned a master’s degree in public policy from Claremont Graduate University. He is a former newspaper reporter for the Los Angeles Daily News and for the past twenty-five years has worked in public relations. He also taught journalism as an adjunct faculty member at Pasadena City College.