Mommy, was Grandpa a Nazi?

Recipes for Tolerance and Understanding 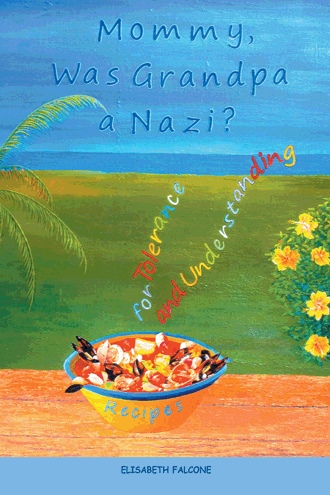 Angie’s question hung in the soft air of a spring afternoon in Miami and swept through me like an ocean wave towards the lush foliage of our tropical garden.  In time and space we were far removed from the Nazis, yet her question was on the mind of many Jewish South Floridians whenever they met my father.  Judging by his age and his distinctly German accent, it occurred to some he could well have been a Nazi.
My teenage daughter usually entered the house with a flourish, a few audible sighs, a kiss on my cheek and a dash to her room to deposit her book bag.  On this day in April, Angie stopped in the archway to the kitchen, the left hand on her hip and the elbow propped against the frame at a sharp angle.  All of this registered in the corner of my eye and inside my brain.
“A Nazi?”
I was bent over a large stockpot, picking meat off a freshly-boiled grouper carcass.  We had been fishing the previous day and reserved the bones for tonight’s fish chowder.  The moment she asked her question, I dropped a particularly luscious piece of meat into the disposal and let out a distressed “Oh, No!”
Angie shrugged her shoulders, said “OK” and turned on her heels.  She disappeared down the hall and yelled,
“I’ll just wash my hands.  Let me help you with that bouillabaisse!”
My mind was reeling, rebounding from the impact of her question.  From the casual way Angie had accepted my emphatic “No!”, she must have interpreted it to be my answer to her question. The subject had never come up before.  Why this sudden interest in my father’s political past?  I knew she had several friends who happened to be Jewish.  We lived in West Miami, a suburb of Miami with a large Jewish population.  Did one of them ask her to find out?  How would they know her grandfather was German?  Her last name was Italian and did not reveal her German ancestry.
She is beside me now, fishing for a plump piece of grouper.
“Yum,” she mumbles as the meat disappears into her mouth. “Is this the big one I caught?”
“Kind of hard to tell at this point.  Which question do you want me to answer first?”
“Oh, you already did.  You said ‘No’.”
“That’s because I accidentally dropped a big lump of fish into the disposal.”
“So what about grandpa?” she asks me.
“The answer is no.”
Angie merely nods. “OK.”
We are standing next to each other, our hands busy with a task we both enjoy:  picking the meat off the carcass of a fish we caught ourselves.  Like a bobber on a fishing line, her question floats on the surface of my mind – front and center.  Questions chase each other.  Who asked Angie about my father’s past?  Who wants to know about his politics?  How do they know she is of German descent?  Am I just being paranoid?  Why do they assume my father was a Nazi?  Because he is German?  Did they see one of those horrid Hollywood movies about WWII at school with all the Germans screaming Achtung! and Heil Hitler!?
“Mommy, look!  Our hands are really yucky!  We’re like a couple of crabs stripping meat off these bones!”  She laughs, oblivious to my train of thought.
I smile at her and ask,
“Angie, who asked you about your granddad?”
“Mrs. Singer, our Social Studies teacher.”
“I see.  How does she know granddad is German?”
“Oh, I told her.  We’re studying about WWII and we’re reading ‘The Diary of Anne Frank’.”
“And she asked if he was a Nazi?”
“Well, not straight out like that.  She just said, I might want to know more about my grandparents’ life in that horrible time and to ask you.”
She hesitates and then turns her clear, blue eyes on me. With a penetrating look she asks me,
“He wasn’t, was he?”
I have learned over the years that Angie’s eyes seek the truth at all times, and I love my daughter for that.  So I stop, face her and meet that laser-like look.
“Your grandparents have always told me they hated the Nazis because they were so horrible.  They ruined everybody’s lives.”
“They sure did,” she says with conviction and reaches for the last of the carcasses to be cleaned.
“Mommy, what else are we putting in this bouillabaisse?” (She loves to use the French word for fish stew.)
I realize the Nazi issue was being replaced by the far more important matter of fish stew ingredients, so I answer her,
“Oh, you know, celery, onions, carrots, tomatoes and herbs and spices.  I also got some crabmeat, shrimp, mussels and clams to add to the stew.”
We chop the vegetables, add them to the fish stock and clean up the kitchen while the stew simmers.  Soon the delicious aroma fills the entire house.  My mind is already on the conversation I plan to have with my husband later in the evening, just as he walks in the door.
“Something smells great!  Are we having grouper chowder?”
“No, Dad, it’s bouillabaisse!!”  Angie informs him.
“Bouilla-whatever!  It smells great!”
During dinner we talked about our fishing trip and the many fish we had caught.  My mind was elsewhere, but I joined in the conversation and pushed my misgivings aside.  This was Angie’s big moment.  She had caught the grouper and prepared a tasty stew with it.  No Nazi nonsense would spoil her enjoyment.  It could wait.
Once Angie and her brother had gone to bed, I told John,
“We need to talk about what Angie asked me today.”
“Is there a problem at school?”
“Not really.  Well, yes.  I’m the one having a problem.  This has me so upset.”  I told him what happened when Angie had come home from school.
“Of course, I told her that my father hated the Nazis and never joined the party.” 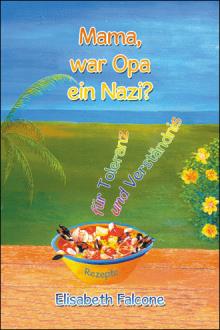 Time seems to stand still when we share a meal with family and friends or with strangers.  The concept that food releases a chemical reaction enhancing our capacity for tolerance and understanding is a common thread in the stories of this book. They take us from WWII Germany to present-day Europe and America .
When the author’s daughter, Angie, comes home from school and asks, “Mommy, was grandpa a Nazi?”, the author wants to find who wants to know and meets with Angie’s teacher, Ruth Singer, who is teaching about the Holocaust.  They have much in common, and their love of cooking leads to a lifelong friendship.
“Gita’s Diary” is about a Polish refugee whose  culinary skills help the author’s grandmother and her children to survive while the grandfather is in a Nazi labor camp.
In “Gentiles Only”, Ruth Singer discovers that in the 1950’s Jews are not welcome in some Miami Beach hotels.
“Forbidden Love” is about Silke, a Norwegian immigrant, who falls in love with Julian, a Black man. She learns that in the 1970’s racially mixed couples are taboo in America . They separate, but a cousin’s magic cooking reunites them.
Paul, an American art student in “Aix Marks the Spot”, abandons his prejudice against the Irish when a young Irish pastry chef serves him a delicious dessert.
Soon after the 9/11 attack, Claudia, a Catholic Latina, meets Azir, a Muslim, on a cruise ship.  In “Plain Couscous” they set aside their religious differences to enjoy each other and Claudia’s picnic.
“Mutti’s Story” and “Vati’s Story” helped Angie to understand her grandparents’ experiences during WWII.
The stories’ recipes are listed at the end of the chapter.  Complete recipes are in the Appendix.

Elisabeth Falcone was born in Berlin, Germany, two months before the end of World War II. After immigrating to the United States in 1959, she learned to adapt to the American culture. Having completed her foreign language studies and receiving an M.A. in Linguistics from Florida Atlantic University, she became an educator. Whether in the classroom or on television, she has exposed her students to ethnic diversity by sharing with them her insights into other cultures, as well as the “authentic materials” she gathered on her worldwide travels. Her immigrant background has made her acutely aware of the way we interact with people of other ethnicities as we endeavor to find similarities that connect us. Along the way, she has discovered that cooking, one of her hobbies, provides a delicious way of achieving harmony among people. Recipes for multi-ethnic dishes appear in this book. She and her immediate family live along the East Coast of Florida.