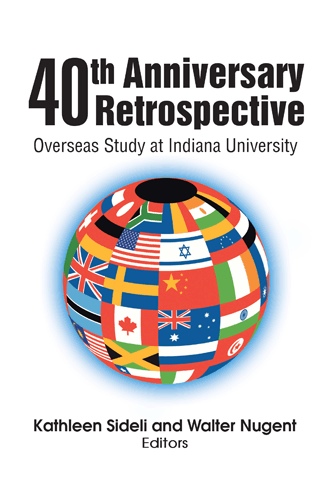 In the spring of 1966 Dean Doner of Purdue and I made the first formal inspection trip to the three European sites. Because we found that the programs were all functioning well, upon our return to West Lafayette and Bloomington, we recommended only relatively few changes to our respective committees. Dean Doner and I, however, conveyed to our committees some interesting insights into the psychological make-up of the students who were studying in the three European locations. While popular racial or ethnic stereotypes can be grossly misleading or even vicious, the fact is that Dean Doner and I had a unique opportunity to discover that the students we interviewed in Hamburg, Strasbourg, and Madrid had, apparently, after some six months of residence abroad, developed certain psychological and behavioral characteristics that seemed to reflect the cultures and the regional psychologies of their respective countries. Evidence of this struck us most forcibly as we conducted group interviews with our students. The students being gathered around us in Hamburg, we asked them what they had to report about their experience abroad, the strong and weak points of our program, what changes should be made in it, the adequacy of our selection process and our orientation of students, etc., etc. Our queries at first met with almost total silence. The students were simply taking time to think before formulating their answers. After some moments these came, but they were all expressed with a kind of decorous sobriety that is popularly associated with the German character. There was no attempt by the students to dazzle either Dean Doner or me or their fellow students with the brilliance of their observations; rather they all seemed to be genuinely concerned with convincing us that considerable thought had gone into the formulation of their usually very quiet and very responsible answers. A sense of discipline and decorum filled the room. No student interrupted another student as he/she was talking. Everything was cordial and friendly but well ordered. Dean Doner and I learned a lot from our exchange of ideas with a group of very good and very serious students. In Strasbourg the atmosphere at our interview was much more lively. Students were quite animated and even emotional, though they always displayed also a certain basic intellectual discipline. They seemed to want to bring great intelligence to bear upon their analysis of all problems. A French eighteenth-century rationalist like Voltaire or a Rousseau would have been proud of them. Dean Doner and I felt that our group interview had been very fruitful and we came away impressed by the quality of the thought processes that went into our students' responses; but there was no denying that the contrast between the verbal liveliness of the students at Strasbourg and the relative placidity of those at Hamburg was striking. Madrid was another world. Dean Doner and I could hardly ask a question before we were besieged by spontaneous and multitudinous answers coming from all directions. The students asked us questions before we could formulate our own, and there was no hesitancy on the part of anyone to express himself/herself with confidence and vehemence on practically any topic that came up. Nor was there any hesitancy to step on or interrupt someone else's comments in midair. The volatility of the Madrid group coupled with its very constructive attitude and its determination to give Dean Doner and me a real earful were overwhelming. It was obvious in the first two minutes of our interview; that the students in Spain, though less disciplined and less "intellectual" than the students we had met farther north, had developed a great penchant for lively verbal exchange. Not in vain had they conversed with their Spanish families or argued over coffee tables with Spanish students. So it was that Dean Doner and I concluded that there were certain normative psychological differences between the German, French, and Spanish cultures which our students had picked up as part of their acculturation process. An interesting phenomenon, it led us to reflect that not all popular stereotypes should be considered either totally groundless or destructively negative in their consequences. On the contrary, our students in Hamburg, Strasbourg, and Madrid all seemed to have turned whatever allegedly stereotypical characteristics they had acquired from their contact with their respective cultures into real positives. In so doing they had simply succeeded in becoming in some small measure Germans, Frenchmen, and Spaniards, at least for the time they resided in Europe. Merle E. Simmons, Chapter One

This 40th Anniversary Retrospective presents the reminiscences of the directors of Indiana University’s Office of Overseas Study, from its creation in 1972 until the present day. They recount not only how IU faculty and administrators selected partners and locations around the world but also how they established systems at the university to facilitate student access and participation. Integrating such programs into a large public institution of eight campuses posed challenges as well as opportunities. While study abroad today is considered a high impact educational activity that students expect from a college experience, the eight authors show how unique such opportunities were just a few decades ago. Faculty and administrators who are tasked today with designing education abroad programs for students will appreciate and learn from this comprehensive overview of administrative and academic know-how. And those who had similar experiences during the past few decades will commiserate with the trials and tribulations inherent to internationalizing an institution of higher education.

Kathleen Sideli is Associate Vice President for Overseas Study at Indiana University where she has system-wide responsibility for education abroad programs. She holds a B.A. from Molloy College and an M.A. and Ph.D. from Indiana University where she taught Spanish for twenty-five years. She has published and presented in the field of international education and has served on the boards of multiple organizations. She was a founding member and first President of the Forum on Education Abroad. Walter Nugent taught at IU from 1963 to 1984, when he became Tackes Professor of History at the University of Notre Dame, retiring in 2000. He was Associate Dean of the College of Arts and Sciences at Indiana University from 1967-72, founding Director of Overseas Study in 1972-76 and Associate Dean for International Programs 1974-76. He has authored a dozen books in US and comparative history, as well as about 200 journal articles, essays, and reviews. He has been president of three historical societies and has lectured in Ireland, Israel, Italy, Poland, and Brazil, as well as the United States.